﻿ ﻿
Today, Lutherans recognize and celebrate the Lutheran Reformation.  October 31, 1517 is the day on which Martin Luther nailed his 95 Theses to the door of the Castle Church in Wittenberg, inviting professors and theologians to debate the abuse of the sale of indulgences.

There are many who wonder if Luther's actions were truly beneficial.  After all, the Christian Church is much more fractured now than she was in 1517.  False teachings and alternative interpretations of Scripture abound.  Was it worth it?

For a brief answer, I borrow (okay, shamelessly copy) from Dr. Gene Veith and his blog, Cranach: The Blog of Veith. (Go visit there, frequently.  It is reguarly interesting.)

...the posting of the theses did not shatter the universal church.  Luther was reforming the church, and it needed reforming.  Financial corruption (the sale of church offices, the indulgence and relic trade, profiting from Christians terrified of purgatory), sexual immorality (popes with illegitimate children whom they named bishops, brothels for priests, the notion that fornication is better than marriage for clergy under vows of celibacy), and political power (popes with armies waging war against other countries, popes claiming temporal power over lawful earthly authorities).  Even worse, the gospel of Christ was obscured in favor of an elaborate system of salvation by works.  To be sure, the medieval church taught Christ’s atonement on the Cross for the forgiveness of our sins, but in practice that was relegated to baptism only.  After baptism, Christians had to atone for their own sins in a complex penitential system, requiring the confession of each sin, works of penance, and even after absolution the punishment of those sins after death in purgatory (unless an indulgence was purchased or rewarded).

The issue of the Reformation was always the Gospel of Jesus Christ and the free and clear proclamation of that Gospel.  Luther had no patience for anything that distracted from or distorted the Gospel.  He blasted away at those who opposed its preaching.  We are, perhaps, much more timid today that Luther was.  This is to our shame.  Granted, we will not be considered tolerant, open-minded, or even nice if we take a bold stand on the Gospel and expose and condemn all teachings that distort it.  But, like Luther, our goal is not to promote ourselves or to gain popularity.  It is to be faithful to Jesus Christ and his word.  It is all that matters, because it is all that saves. 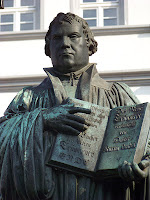 The work of the Reformation is not done.  False teachings still arise.  The Church is still attacked.  Christians still become tired from the battle, deceived by fine-sounding arguments, and apathetic to the Gospel.  The word of God is the only solution to any of this.  Some will despise it.  Others will cherish it.  But the Church will not perish.  God will not forsake us.  And even if our Christian faith costs us our reputations, our freedom, our families, or our very lives (that is, "Take they our life, goods, fame, child, and wife...."), we have truly lost nothing.  The Lord still reigns, and the kingdom is ours forever.
Posted by Pastor Thomas E Schroeder at 11:45 AM No comments: 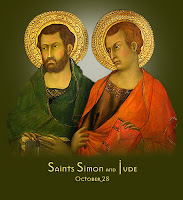 In the name of the Father and of the Son + and of the Holy Spirit.  Amen.
Posted by Pastor Thomas E Schroeder at 12:19 PM No comments:

The Communion of Saints 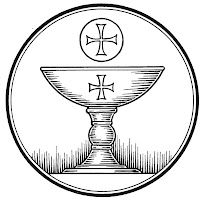 As I was visiting one of our shut-ins today, I was pondering a portion of the order that I often use with them.  Following our meditation on the up-coming Sunday's sermon, we continue with the liturgy for the Lord's Supper.  In the order I use, it begins:

"These elements have been carried from the altar of the church of our Lord Jesus Christ, where his blessed words of institution were spoken over them, words which I now repeat in your hearing."

These words highlight to the shut-in (or hospital patient, as the case may be) that he or she is still a part of our congregation and is still communing with us.  It is not that he or she refuses to come to the altar with us; it is that physical weakness, ailments, or in some cases distance, prohibit it.

We are one body of Christ, and while some are unable to be with us, they are still of one body with us.  Christ still comes to bless us with Holy Communion.  For the shut-in, that is not some renegade form of Communion, as if it is a different or unique communion from the rest of the congregation..  It is still linked with God's altar and God's people.  They are not forgotten.  They are still united.  They are still our fellow communicants.  They are still blessed.
Posted by Pastor Thomas E Schroeder at 3:53 PM No comments:

In the name of the Father and of the Son + and of the Holy Spirit.  Amen.
Posted by Pastor Thomas E Schroeder at 4:52 PM No comments:

One of the blogs I frequent (Rev. Larry Beane, a.k.a., Father Hollywood) made mention some time ago about being a tourist in your own home town.  The idea is that you are so accustomed to your surroundings that you don't take any time to notice the beauty and places of interest that are in your own back yard.  So, be a tourist and take a look around!

That prompted me to think of ways of being a local tourist.  From time to time, I hope to visit and take photos of places and activities in the area that are normally just a part of the scenery.  But you know what?  They are scenery.  They are there to be seen and enjoyed.

Here's the first batch of such photos -- Autumn in Novi and Northville.  Enjoy! 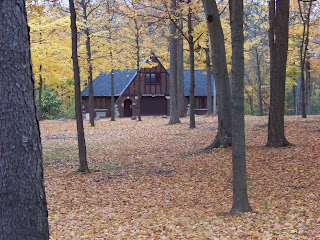 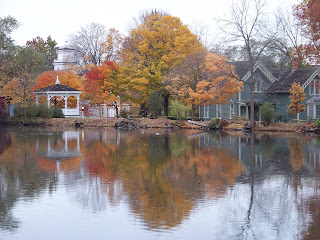 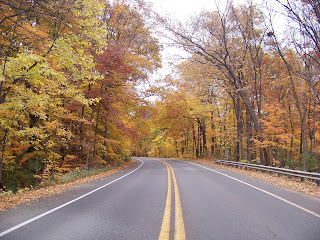 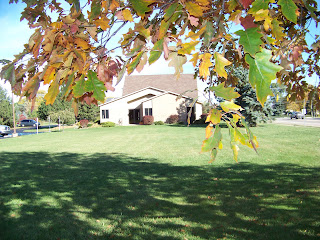 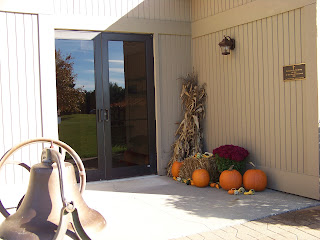 Posted by Pastor Thomas E Schroeder at 11:37 AM No comments:

Here are some photos from the hay ride at the Heidt's.  Thanks so much again!  We all had a blast, and the Tigers' win helped.  Hay ride photos were all taken before we got pelted with rain. 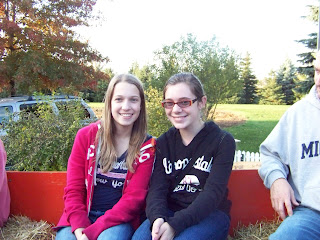 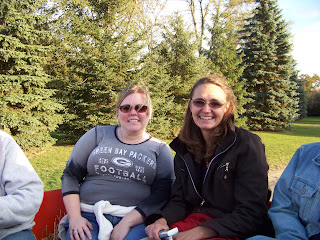 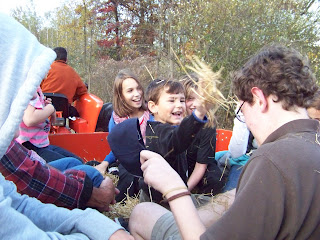 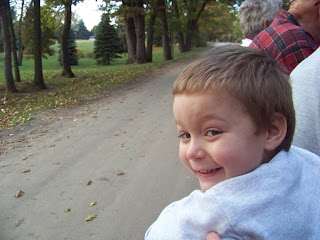 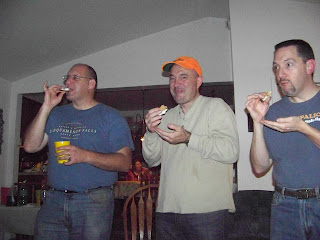 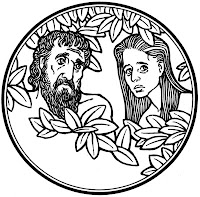 In the name of the Father and of the Son + and of the Holy Spirit.  Amen.
Posted by Pastor Thomas E Schroeder at 12:06 PM No comments:

St. Peter Lutheran School had its October break for the Teachers' conference, so we got out of town.  "Getting out of town" has come to mean more and more going to Saginaw.  So, off we went.

Then we went to Andrew's JV game at Breckenridge.  Again, no photos, but with the cold weather and spitting rain, it was just as well that the camera did not go outside.  Peter slept in the car and Laura stayed with him.  Caleb and Philip found a patch of grass to play their own football.  Andrew played quarterback.  He ran for quite a few yards, including on TD run.  He also threw for another.  MLS won handily, 42-0.

At our hotel, the boys swam in the pool and got caught up on the adventures of Spongebob Squarepants.  As you can see, they also made good use of their time at Bronners in Frankenmuth. 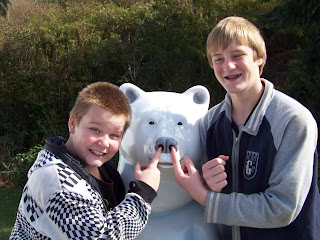 Friday night was Parents' Night at MLS.  MLS hosted Breckenridge and won 49-21.  Nathanael did not play much in the second half, as the senior wide receivers got precedence over others.  He was this close to scoring a TD. 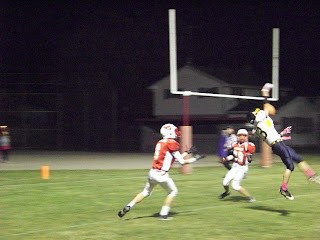 These games are getting colder and colder.
Posted by Pastor Thomas E Schroeder at 1:32 PM No comments: 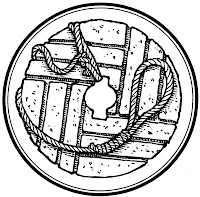 In the name of the Father and of the Son + and of the Holy Spirit.  Amen.
Posted by Pastor Thomas E Schroeder at 6:56 PM No comments:

God opposes the proud, but gives grace to the humble.  (JAMES 4:6)

James speaks very strong words.  God opposes the proud.
Now, chances are, you are not too fond of the proud.  We are generally annoyed by those who are full of themselves.  Very few people find arrogance to be an attractive quality.  But it is not that God is annoyed.  It is not that God is turned off.  God opposes the proud.  He stands against them.  He fights against them.  His wrath burns against them.
And as long as the proud are referred to as “them,” you smile about it.  You have a streak of vengeance which giggles at the thought of God smiting those too-big-for-their-own-britches kind of people.  And, of course, you assume that those kinds of people are not you and your kind of people.
So tell me, isn’t this pride?  Lord, I thank you that I am not like them.  You will not see me be as arrogant, as boastful, as full of myself, as ego-centric as them.  I am better than them.
No, you are not.  Repent, for God opposes the proud.
Therefore, God is pleased with his Son, Jesus Christ.  He humbled himself to leave his heavenly throne and all its glory.  He humbled himself so that God made himself man, so that the immortal one would let himself be put to death, so that the blessed one would take on a curse, so that righteous one would make himself sin.
God is pleased with Son, Jesus Christ, who, being in very nature God, being all glorious and all powerful, made himself nothing.  And he did it for you, who are reluctant to admit that you have sinned.  He did it to pay for all of your sin.  He covers over your shame.
You know that you cannot do the works that Jesus did.  But these are the only works that have ever pleased God.  But now, he gives this all to you.  He gives you the benefits of his death.  He gives you the righteousness of his life.  He gives you these things because you have no other way to obtain them.
God gives grace to the humble – to you who recognize that you have sinned, to you who know that you cannot meet God even part way, to you who know that the curse, the death, and the sufferings should be yours – after all, you’ve earned them.  God gives grace to the adulterous David, to the blasphemous Paul, to the rebellious Adam, to the belligerent James and John, and even to you.
But God does not give you what you have earned.  God gives you what you have not earned.  More than quenching the fires of hell, God opens the glories of heaven.

In the name of the Father and of the Son + and of the Holy Spirit.  Amen.
Posted by Pastor Thomas E Schroeder at 6:49 PM No comments:

She and Hailey were the two senior representatives.  Either one would have made a fine queen.  Pardon my bias, but I am glad it was Faith.  Congratulations, Faith!  You were (are!) beautiful!  The Homecoming King was Austin Schneider from Saginaw.

The games for the weekend went well, too.  We missed Andrew's JV game, but they apparenlty played very well and beat (I think I had heard a previously undefeated) St. Charles 21-20.  Andrew also said that he scored a TD.

The varsity game was not nearly as close.  MLS won 60-14.  Nathanael caught a TD pass early in the game with a nice run after the catch, juking his way into the end zone.  He also caught a long bomb late in the first half, but I missed it.  I was climbing into a Corvette painted pretty much the same color as our house.  Photos are below. 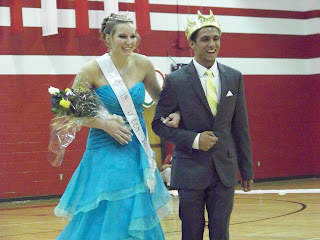 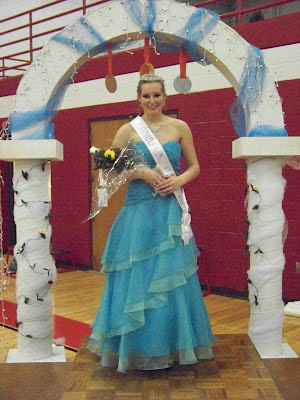 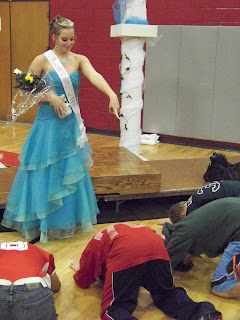 Faith enjoys her royal influence over her brothers. 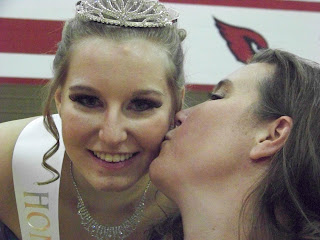 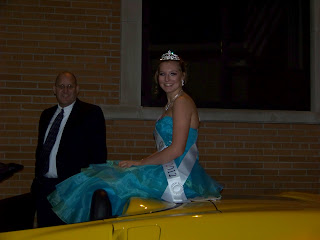 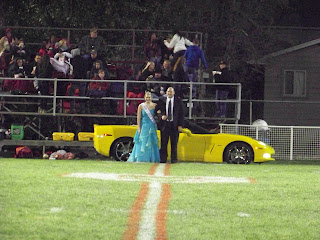 Posted by Pastor Thomas E Schroeder at 11:50 AM No comments:

The parking lot received some seal-coating and restriping last week.  Here is the final result. 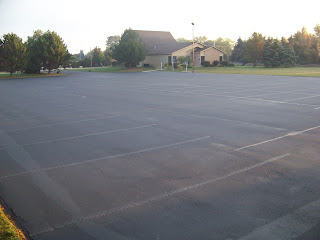 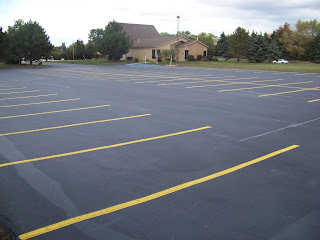 In the name of the Father and of the Son + and of the Holy Spirit.  Amen.
Posted by Pastor Thomas E Schroeder at 6:50 PM No comments: