Good Shepherd's tree is decorated with symbols known as chrismons (from the Latin Christi monogramma, meaning basically "monogram, or symbol, of Christ").  Chrismons are useful in keeping us mindful that our tree is not merely about being pretty.  Everything in our church should proclaim Christ.

While some symbols are fairly obvious to the average church-goer, some remain a but more mysterious. Here are a few chrismons and their meaning. 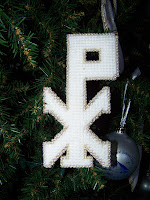 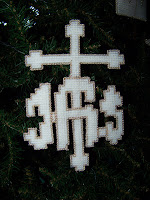 The Ihs which you see in this chrismon represents the first three letters in the name of Jesus.  In Greek, it looks like this: IHSOUS.
Because English has no letter that looks like a sigma, S, the symbol adopts either the sound of the letter (S) or the English letter that appears closest to the sigma (C).  Therefore, the symbol may appear as either IHS or IHC.  Both refer to the name of Jesus.  Our chrismon also has a cross behind it, remind us what Jesus came to do for us. 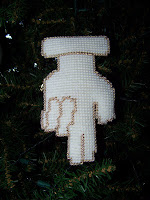 This is the hand of blessing.  It comes down from the Lord to bless the earth.  The three fingers are extended to depict the Trinity, although the hand is often used as a symbol of just the heavenly Father.

This hand gesture is also used by the pastor at the Benediction (though held upward instead of downward).  It is also used by Christians when they make the sign of the cross upon themselevs, the three fingers again used to confess the Triune God.

Posted by Pastor Thomas E Schroeder at 11:55 AM