MLS football is back!

The JV kicked off its season against Carson City-Crystal at MLS's field.  It was a fun game to watch from the Cardinals' side of the field.  Final score was 41-28, with MLS playing mainly 2nd string for much of the 2nd half.

Andrew started at QB and safety.  He scored two TD's, had an interception, and a fumble recovery.  I hope his season has not peaked already.

His most exciting play was on a 4th quarter TD run.  Andrew led the option and ran for about 30 yards.  As he was being tackled, he pitched it to the RB who ran the final 30 yards for the TD. 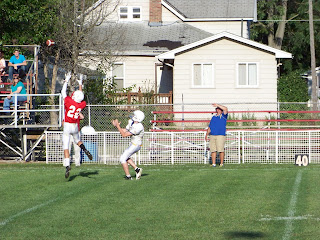 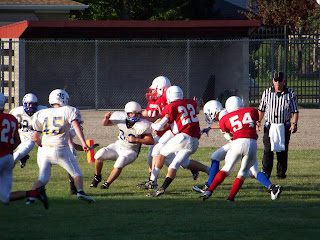 Making his way through the defense for his second TD.
Posted by Pastor Thomas E Schroeder at 9:38 AM