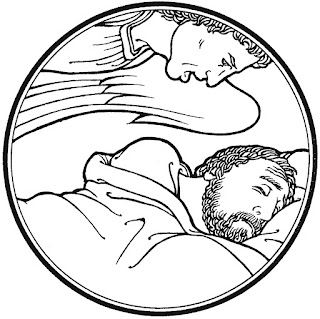 THE LORD REVEALS
THE MIRACULOUS BIRTH
OF OUR DIVINE SAVIOR.

When Joseph got word that his betrothed was pregnant, he could not be faulted for accusing her of being unfaithful to him.  Jewish law stated that he could have had her stoned to death for her immorality.  But Joseph was not out for blood.  He just did not want to be married to someone whom he assumed—fairly—had hooked up with someone else.  He decided to break off the marriage quietly.
But the Lord sent an angel to reveal to Joseph what no one could have known.  “Joseph, son of David, do not fear to take Mary as your wife, for that which is conceived in her is from the Holy Spirit.  She will bear a son, and you shall call his name Jesus, for he will save his people from their sins.” (Matthew 1:20-21)  The Lord reveals the miraculous birth of our Divine Savior.
While Joseph plays a significant role here, he has no lines.  Scripture does not record anything Joseph ever said.  But what Scripture does record is noteworthy.  Joseph listens to the word of the Lord, and Joseph acts according to that word.  When the Lord told Joseph, “Do not fear to take Mary as your wife....” (Matthew 1:20), Joseph did just that.  When Joseph woke from sleep, he did as the angel of the Lord commanded him: he took his wife, but knew her not until she had given birth to a son. (Matthew 1:24-25)  Joseph not only acted according to the angel's words, he also took to heart the Lord's encouragement: “Do not fear to take Mary as your wife.” (Matthew 1:20)
Joseph had good reason to fear.  The very same accusations that Joseph had made against Mary in his own mind were going to be made against him.  Rumors would be whispered among relatives.  Joseph would face openly mockery in the public square.  If Joseph accepted Mary as his wife, it was tantamount to admitting that he had fathered a child outside of wedlock.  If he denied responsibility, then Joseph would have been considered a fool for taking on the expense and responsibility of another man's child.  What could Joseph say?  He could tell the people of Nazareth what the angel had told him.  Do you think anyone would have believed him?
Nevertheless, the Lord had revealed the miraculous birth of our Divine Savior.  Joseph had God's word on this.  So he accepted the scorn of his family, the ridicule of his neighbors, and the responsibility of raising a son who was not his.  For, Joseph was a faithful man who listened to the word of the Lord and acted according to that word.
The Lord reveals the miraculous birth of our Divine Savior.  As the Lord had directed him, Joseph gave him the name Jesus because he comes to save people from their sins.  He comes for you, too.  He comes to bring forgiveness to you for all the times you had falsely accused your friends or rubbed their nose in their sins.  Jesus has come to atone for our sins of gossiping about others in order to feel better about ourselves.  He even comes to cover over our guilt for the times we did not want to listen to his word, or did listen to his word and then decided, “Yeah, I should do that, but I'm not going to.”  Jesus has come to save you from all your sins—not so that you can continue in them, but so that you will not be condemned by them.  He brings you into God's kingdom so that you get to hear his words of comfort, forgiveness, and encouragement.  He leads you to do as God's word says, even if you should suffer scorn for it.
Jesus came to save you from all sin and to set you free from every accusation.  The Lord Jesus was falsely accused of many evils, but he did not repudiate any of the charges.  Rather, Jesus took all the charges for every sin.  For, Jesus did not merely come to be born.  Jesus came to be sacrificed.  The sinless Son of God became the sinless Son of Man in order to be a sacrifice the pays for the sins of all mankind.
That's why this birth matters so much.  Babies are born every day, and all of them are going to die one day.  But Jesus is born to deliver us all from sin and death.  Jesus comes to be one of us so that he can save all of us.  And just as he has become our Immanuel, so he will always remain our Immanuel.  For, while we declare his glories now, our Divine Savior will come again soon to deliver us to the glories of his heavenly kingdom.  And there, we will dwell our Lord forever free from fear and scorn, free from accusations and guilt, and free from death.
I don't know if Joseph ever got to hear the end of people scoffing at him.  In the end, all he could do is cling to the word of the Lord.  And while we never hear Joseph confess his faith with words, we do see it in actions.  Regardless of what his relatives and friends thought of him, all that matters is what the Lord thinks of him.  Joseph has been vindicated, and in fact is blameless of all sin thanks to the boy he named and raised.  It is the same for you.  As hard as it is to hear the scorn and mockery of others, your Lord's word is what matters.  The Lord reveals the miraculous birth of our Divine Savior, and he assures you that your Immanuel is with you and that this Jesus saves you.


In the name of the Father and of the Son + and of the Holy Spirit.  Amen.
Posted by Pastor Thomas E Schroeder at 12:18 PM