Something from... Athanasius on the incarnation of God the Son 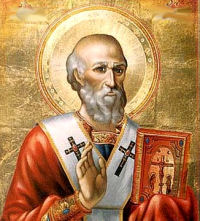 Athanasius (296 - May 2, 373, bishop of Alexandria, Egypt) was a staunch defender of the faith.  His faithfulness to the word of God resulted in him being exiled from Alexandria no less than five times.  Each return after exile was treated with a hero's welcome from the faithful in the church he served.


“For if the sun too, while was made by Him, and which we see, as it revolves in the heaven, is not defiled by touching the bodies upon earth, nor is it put out by darkness, but on the contrary itself illuminates and cleanses them also, much less was the all-holy Word of God, Maker and Lord also of the sun, defiled by being made known in the body; on the contrary, being incorruptible, He quickened and cleansed the body also, which was in itself mortal; who 1 Peter 2:2 did, for so it says, no sin, neither was guile found in His mouth.” (Athanasius, Selections from “On the Incarnation of the Word,” paragraph 17, sentence 7)
Posted by Pastor Thomas E Schroeder at 9:18 AM

Email ThisBlogThis!Share to TwitterShare to FacebookShare to Pinterest
Labels: Athanasius, incarnation, mankind, Something from...