Something from ... Luther re: Justification 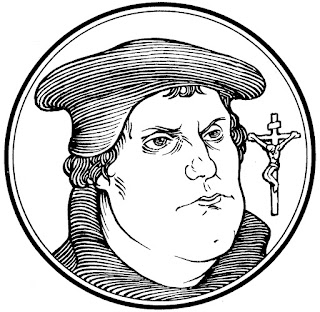 The following is not something Luther took pains to draft for a formal document, but was part of his Table Talk at which he simply spoke off the cuff about all kinds of matters.  Men at the table took notes as Luther spoke.

These remarks are an analogy about justification.

"Martin Luther gave a very clear and apt explanation of the article of justifciation by showing its resemblance to the relation of a father and a son in this way: 'A son is born an heir, is not made one, and inherits his father's good without any work or merit.  Meanwhile, however, the father commands and exhorts his son to be diligent in doing this or that.  He promsies him a reward or a gift in order that in return for it he may obey more readily and freely: "If you're good and listen, if you study diligently, I'll buy you a nice coat.  Come here to me and I'll give you a beautiful apple."  In this way, the father helps his son in his weakness, although the inheritance belongs to him on other grounds.  This is done for the sake of pedagogy.
"'God also deals with us in this way.  He coaxes us with promises of spiritual and physical thing, although eternal life is given freely to those who believe in Christ as children of adoption, etc.  So it ought to be taught in the church that God will repay good works, save in the article of justification, which is the origin and source of all other promises.  One should say, "Believe and you will be saved; do what you will, it won't help you [to be saved]."  Accordingly we should remember that those promises and rewards are the pedagogy by which God, as a very gentle father, invites and entices us to do good, serve our neighbor,' etc."  (Luther's Works: American Edition, Vol. 54, p 240)
Posted by Pastor Thomas E Schroeder at 1:23 PM

Email ThisBlogThis!Share to TwitterShare to FacebookShare to Pinterest
Labels: justifcation, Martin Luther, Something from...