The Bell Tower is coming in for a landing! 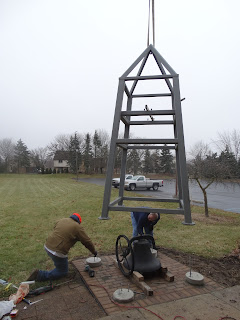 It has been a long, arduous task to get our bell tower in place, but it finally is happening today!  I think the first plans to put a bell tower up were first proposed about ten years ago.  Money was started
in a special fund, and a few more dollars trickled in over the years from various memorials.  Finally, a sizable memorial came through the estate of Alice Laho.  The remaining money needed (which I think ended up being the majority of the money after all expenses were counted up) came from Alice's estate.  Then came architectural renderings from Dan Schneider.  They were presented, tweaked, referred to another source, and approved by the Church Council.  Then we submitted the drawings to the city of Novi who wanted a wind load study done.  Then things were tweaked again.  Then Kendra Fecho set us up with steel workers who would lay the footings and cast the bell tower.  David Rumics arranged to get the bell sand blasted and to receive a fresh black coating (spring/summer 2019).  Finally, the city of Novi approved our design (October 2019), at which point in time the design had been removed long enough from the architect that we had to re-check on the price.  The permit was posted.  The footings were poured in November just before 8 inches of snow dropped.  The bell was taken away just before Christmas to be fitted to the tower.  (Did I mention the task was long and arduous?)  My recollection of this may be off a little, but I don't think there is any degree of exaggeration in it.

Well, today, the bell tower has been delivered and mounted.  We still need to order a plaque for its dedication (in memory of Alice Laho) and it still needs to be painted (likely in April).  But, here are some photos to show the excitement for the day. 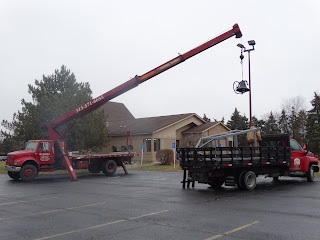 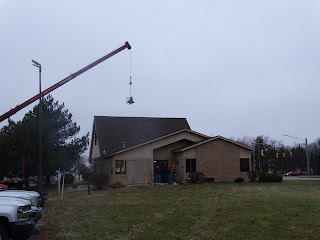 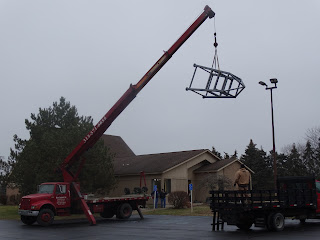 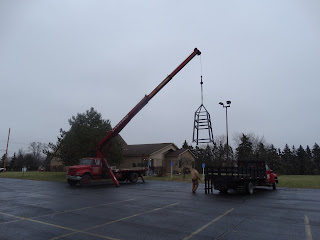 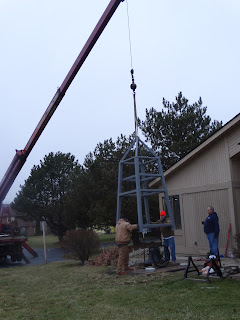 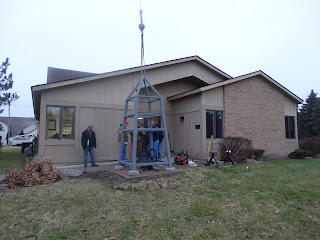 Posted by Pastor Thomas E Schroeder at 10:32 AM