Well, when you play the state champs.....

It was a rough week for MLS football.  We knew going in that Ithaca would prove a steep challenge.  They were.

Since the score at half time was 24-0, we take solace in a much better 2nd half.  Ithaca did not score their final TD until the last minute of the second half. 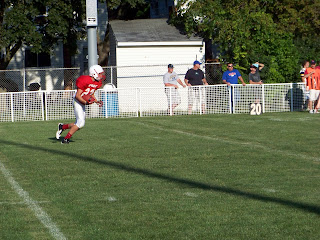 MLS also staged one of the strangest first downs I've seen.  With the ball somewhere around their own 40, MLS threw an interception.  It was returned close to the goal line where the Ithaca player was hit from behind.  He fumbled.  MLS recovered.  The play resulted in an MLS first down deep in their own territory.  I don't think that's exactly how they drew that one up.

We went to Ithaca's beautiful stadium, complete with a newly installed jumbotron which you could only see from the home team's stands.  The visitors had to turn around and crane our necks upward only to see the screen from a bad angle.  The townsfolk made it clear to anyone who commented on the stadium improvements that all funding came from the community (including one generous donor) and not from tax money.  I guess winning the state championship two years running produces some strong community pride.

No volleyball until Sept 8.
Posted by Pastor Thomas E Schroeder at 11:49 AM