Friday was not a good day to be related to me.

PROOF #1 --  Laura broke her ankle while getting the mail.  (We are still working on a better story than that one.  Any suggestions are welcome.)  Apparently, she found a hole in the front yard, fell, and heard a snap.  Laura knew that the snap meant bad news -- my wife is pretty sharp!  She crawled to the car and phoned me for help.  Peter, meanwhile, enjoyed all of this while strapped into his car seat.

A trip to the ER and a few hours later had Laura coming home in a splint/cast.  Now she rests at home, awaiting further visits to the doctor and learning to live with crutches.

PROOF #2 -- Nathanael was vaulted from back-up quarterback position to starting QB when the starter got hurt the week before.  Apparently, he took quite a beating.  (I couldn't be there.  Cf the paragraphs above for the reason why.)  He toughed it out until halftime and then said he could not go anymore.  Having trouble breathing and talking were two good reasons.  It was thought that he broke a rib, perhaps more.

A trip to the ER and, thankfully, we learned that it was only contussions.  Yeah, ONLY.  Nathanael doesn't feel the only when he bends or turns.  He was told to rest a lot and take his pain killers.  We heard he is feeling better, but I suspect this will hurt for a few days.  In any case, MLS had to resort to their 3rd string QB.  They lost, 9-7.

Thursday, however was a good day to be Andrew.  MLS JV beat St. Charles, 20-16.  Andrew scored two TD's (his first one is seen below), just missed two interceptions, had a bunch of tackles, and did haul in one interception that was inexplicably overturned by the refs who threw a flag (presumably for pass interference), but waved it off because the pass was intercepted.  Then later, they said there was an inadvertent whistle (which no one heard) and rather than call the play dead after the pick, just called it a do-over.  High marks for creativity on that call. 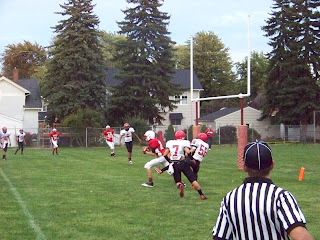 Big weekend coming up for volleyball with a tournament at HVL this weekend!  For once, our travel costs will be minimal!  That's okay, we will be spending that money on doctors' bills.
Posted by Pastor Thomas E Schroeder at 9:08 AM

Email ThisBlogThis!Share to TwitterShare to FacebookShare to Pinterest
Labels: family, MLS, The kids