Girls' high school basketball can be brutal.  Last night we attended the Michigan Lutheran Seminary (MLS) game vs. Carrollton.  MLS came up short 37-28.  But the action under the basket was fierce.  Girls were shoving and pushing and throwing arms and elbows to get position.  Faith took quite a beating.  (She usually does.)  Fouls were rarely called.  To be fair, Faith got 4 herself.  Though with the level of shoving and pushing, I had to wonder what finally moved the ref to blow his whistle.  Not many of the fouls looked different than the regular play.  Maybe it was a cumulative thing.

Anyway, the most noteworthy part of the game was this: It was the last game Faith and her senior teammates will ever play in the MLS gym.  There are a few away games left, but the home games are over.  One nice moment was the senior lady Cardinals joining to sing the national anthem before the game. 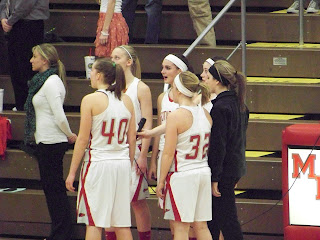 After the game ended (Oddly, there was never a final buzzer.  The scorer's table missed the last inbounds pass and did not turn on the clock.  The ref just blew the whistle and everyone shook hands and walked off the court.  It was a strange non-ending.), Faith went, knelt down, and kissed the "S" at center-court.

I know she will miss playing there.  And I will miss watching her.

Here is her final shot on the MLS court.  She made it. 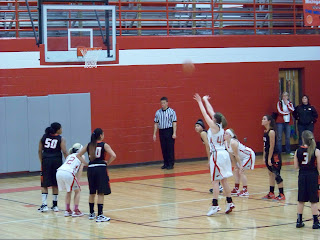 Posted by Pastor Thomas E Schroeder at 10:54 AM

Email ThisBlogThis!Share to TwitterShare to FacebookShare to Pinterest
Labels: basketball, MLS, The kids