This past weekend had a few football items to highlight.

First of all, Nathanael had his football banquet.  I knew that he had a good season, but I guess I was not aware of just how good it really was.  He received awards of First Team All Conference at wide receiver, and we just learned that he was named to the Saginaw News' Dream Team.  You can read about that accomplishment here: 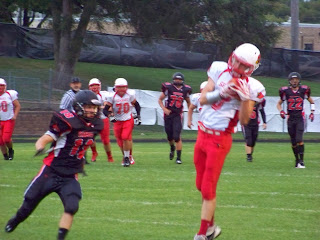 Unfortunately, I was not able to attend Nathanael's banquet.  That's because Caleb, Peter, and I went to Wisconsin for the weekend.  We ended up celebrating Thanksgiving early with my parents, my brother and his family, and my sister.  Then on Sunday, Caleb got his birthday present a few months early.  We went to the Viking-Packer game at Lambeau Field.

Caleb had a great time.  He expected the field to look bigger than it is.  But he also expected us to be much farther away from the field than we were.  Row 50, and you can still see everything as plain as day.

We endured 3 quarters of mediocre football (okay, bad football), only to see Matt Flynn come off the bench and rally the Packers to a 4th quarter comeback.  Then we went to overtime (23-23) where we got our hopes up.  The Packers at 1st and goal at the 8 yard line, but were unable to punch it in.  The field goal enabled Minnesota to get the ball and match the Packers.  So after each team scored a field goal in OT, we watched the clock run out.  A tie.  And fans from both sides left the stadium rather subdued.  So, Caleb got to see 75 minutes of football concluding in a 26-26 tie.

As for me, in taking my kids to see a game at Lambeau Field, the Packers are now 1-1-1.

Here are some pics. 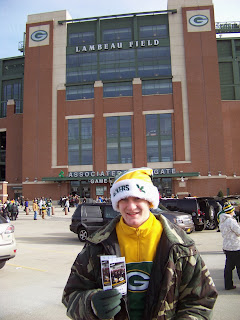 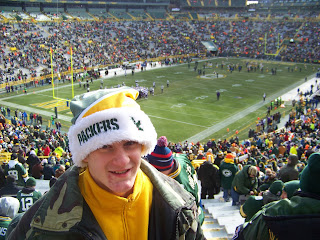 Posted by Pastor Thomas E Schroeder at 9:26 AM