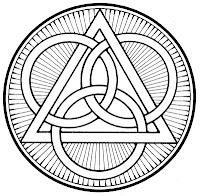 This article is in preparation for the Festival of the Holy Trinity, May 31, 2015.  On that day, we will be confessing the least known of the three ecumenical creeds, the Athanasian Creed.  Most people know the Apostles' Creed and the Nicene Creed.  The Athanasian Creed is least known because it is rarely confessed in public worship.  The reason, most likely, is because of its length.  Because of its length, we confess it at Good Shepherd only once a year, on Holy Trinity Sunday.  It is in the Athanasian Creed that the Church has its most explicit confession of what the Trinity is and what it is not.  The creed confesses what must be confessed, and yet leaves the Trinity a mystery since there is nothing on earth that the Triune nature of God can be compared to.

Here, then, is the article, which will also be in the bulletin this Sunday:

Finally, a study of this creed and the history which surrounds it shows how important it is for us to be familiar with the history of the Christian Church.  When we understand how Christians who have gone before us identified error and combated it, then we will better be able to do the same.
Posted by Pastor Thomas E Schroeder at 7:50 PM