This past Saturday, the Local Tourist and family (at least, whoever was available, which was only Laura and Peter), wanted to do something to see different scenery.  We decided to go to Historic Fort Wayne on the south side of Detroit and along the banks of the Detroit River.  It is only $5 per car load, and there are lots of buildings to walk through.  It is only open on weekends.  Sadly, it does not open for guests until May.  So, plan B.

We headed north of the downtown and drove to Belle Isle and had a picnic along the bank of the Detroit River.  We walked through the aquarium, the conservatory, played around the fountain, stopped in briefly at the Dossin Great Lakes Museum, and walked to the Livingstone Lighthouse on the north-eastern tip of Belle Isle.

Because we have the state park passport already, the entire day was free (donations accepted at most places).  Because the day was so nice, Belle Isle was really hopping.  There were lots of bikers, joggers, picnic-ers, photographers, fishers, boaters, and people just enjoying the sun.  Workers were also in the process of getting the roads on Belle Isle prepared for the Detroit Gran Prix later this spring.  The trees were still pretty barren, only buds; but the fields of daffodils--large swaths of yellow--were scattered around the island and were in full bloom.  They were pretty. 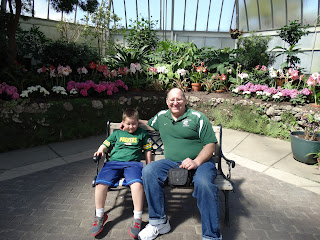 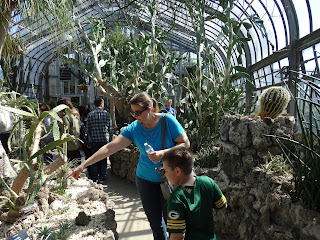 Posted by Pastor Thomas E Schroeder at 8:34 AM