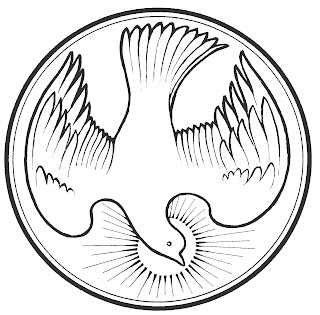 The Lord Jesus told his disciples before he ascended into heaven, “Peace I leave with you; my peace I give to you.  Not as the world gives do I give to you.  Let not your hearts be troubled, neither let them be afraid.” (John 14:27)  Although Jesus has ascended into heaven, he does not abandon his disciples.  When Jesus ascended into heaven, he sent his Holy Spirit to dwell in you so that, no matter where you are, God is with you.  He is always your Immanuel.  Jesus lives, and through his Spirit the Risen Savior bestows a lasting peace upon you.
The world does not know such a lasting peace.  Whatever peace this world promises is is momentary.  Peace treaties are only valid until someone finds a reason to break them.  Nations are either at war or are worried about what their enemies might be plotting.  All it takes is one argument for a family's peace to be destroyed, perhaps even for a generation.   Peace in the workplace can be disrupted because the wrong guy got the promotion.
Still, we crave peace because peace is good.  Familial harmony is a blessing.  Workers delight in a happy workplace.  The entire world wants a life without war, disaster, or petty bickering.  But the world cannot give such peace.  Sinners are all too ready to go to war—whether full scale armed conflict or personal and petty vindictive battles—over just about anything.  And it is not just “out there.”  It is you, too.  Repent.
You and I are also guilty of causing fights and factions because of self-centered pride.  Your conscience tells you so.  Your conscience does not convict you of sins you did not commit.  Your conscience is a witness against you for the evil things you have done and for the good you failed to do.  And your conscience does not negotiate peace with you.  If you are guilty, your conscience continually says so.  Repent.
To the guilty conscience, Jesus bestows a lasting peace.  He does not tell you to ignore your conscience, nor does Jesus pretend that you are innocent.  Instead, he takes your guilt and the punishment your conscience testifies that you deserve.  Jesus has suffered and died in your place for the charges which had stood against you.  And based on Jesus' sufferings and death for you, the Lord pardons you of all charges.  Your sins are not ignored; they are forgiven.  By his forgiveness, the risen Savior lives to bestow peace.  And since Jesus lives and reigns forever, his peace lasts forever, too.
Likewise, we all have our own death to face.  Death produces both sadness and fear.  But even in the face of death, the risen Savior bestows a lasting peace.  Jesus Christ has gone into death for you, but he is risen.  Jesus' body departed from the grave never to die again.  Since you have been baptized into Christ, this victory is yours too.  In baptism, Jesus gave everything that is his and made it yours.  Now you, too, are sons and daughters of God Most High.  Now you, too, are children of the resurrection.  Now you, too, are heirs of eternal life.  Just as the Lord raised the daughter of Jairus and the young man from Nain from the dead by calling them to wake up, so the Lord will do for you.  Death does not have the last word; Jesus does.  Death will not last, but your peace will.  So even in the face of death, you have a lasting peace.
The risen Savior bestows a lasting peace to you.  It is not based on your feelings.  Those change.  It is not based on what you experience.  God's love is not determined by good days and bad days.  The risen Savior bestows his peace through his word which never changes.  Jesus said, “If anyone loves me, he will keep my word, and my Father will love him, and we will come to him and make our home with him.” (John 14:23)  Keeping God's word is not merely following his commandments; it is especially holding firm to his promises.  And since God's word does not change, your peace will not change.  Since God's word will never pass away, your peace will never pass away.
Nothing in this world can undo Jesus' death, so nothing can undo his forgiveness to you.  No disaster can negate Jesus' resurrection, so nothing can negate your salvation or your resurrection.  God's love for you remains constant.  God remains your Immanuel.  Jesus lives, and your risen Savior bestows a peace which endures every circumstance, overcomes every fear, and lasts forever.


In the name of the Father and of the Son + and of the Holy Spirit.  Amen.
Posted by Pastor Thomas E Schroeder at 12:56 PM