The final edition of the football portion of this blog includes a number of "lasts" in the Schroeder family.

The last game of the year for Michigan Lutheran Seminary came on Saturday, Novembmer 19 in the state semi-finals against Ottawa Lake-Whiteford, hosted at Edsel Ford High School in Dearborn.  Snow showers blew through before the game got started, but it all melted away for the game.  It's too bad.  I think the 4 inch snowman I made would have liked the game.  The winds, however, continued to blow from west to east (I think), that is, from our right to our left.

Whiteford had some big boys on their offensive line, which enabled them to run the ball and gain enough yards each three plays to get first down after first down.  MLS, on the other hand, was able to break long runs a few times, but we needed the ball a lot more to do more damage.  The end result was a 40-21 loss.

Although it was the last game of Caleb's season (who had one catch for a pretty good gain), it was not the last game of his career.  We anticipate a good senior year for him.  Meanwhile, on to basketball.

You can check out an article from M-Live here. 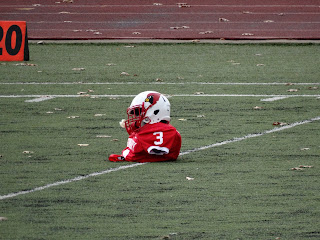 From the way it sounds, Nathanael and Andrew have both played their last games at Concordia.  Andrew has plans to try to make a Division 1 squad.  Right now, we are hoping that the University of Cincinnati will be his destination.  We are still waiting for all the steps to be taken to get that done.  Interestingly, if he does make the team there, he will retain the Red-Black-White color scheme that we have gotten used to (Michigan Lutheran Seminary, Martin Luther College, Saginaw Valley State, and Concordia - Ann Arbor).

Nathanael, although he has one year of eligibility left, seems to be content to concentrate on studies and pursuing a career.  Below, you can see photos of Nathanael's final game (the ones where he is in the red uniform).  Concordia won big.

Concordia had one more game in which Nathanael could have played, but he took a hit on his knee which was originally diagnosed as an MCL sprain.  Although he finished the game, he was hobbled.  He figured he could have had a TD catch deep if he had full strength in that knee.  Anyway, his last catch, and the hit that did him in, are both posted below.

For many players, football ends at high school.  Nathanael got one more chance to play at Concordia, and we got to enjoy watching him play one more time.  He has enjoyed his share of success from the Novi Bobcats to the MLS Cardinals to the Concordia Cardinals.  I hope that he has good memories from all of these years.  I know that he will have better stories to tell his kids than I have. 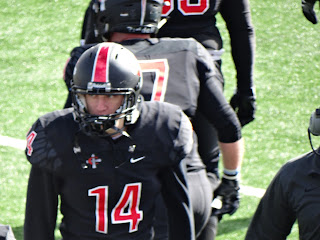 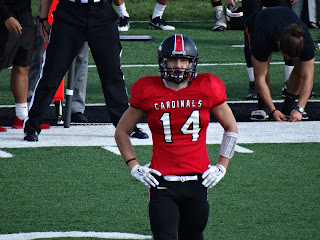 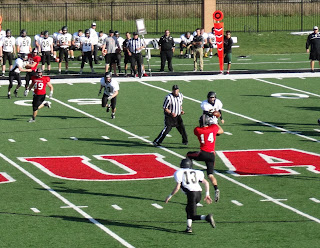 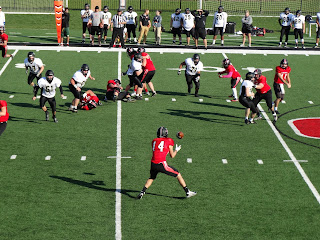 This is Nathanael's last catch.
Posted by Pastor Thomas E Schroeder at 6:02 PM