On Saturday, November 12, the Michigan Lutheran Seminary Cardinals played host to the Knights of Royal Oak Shrine.  Both entered the game with 9-2 records, and neither had ever seen each other before.  Scouting reports, according to Caleb, suggested that the teams were quite similar.  So, the pre-game analysis came down to cliches like: "The team who makes the fewest mistakes will win."  I guess we can always trust this maxim: "The team who scores the most points will will."

Both teams traded touchdowns early on.  MLS's score came on its first play from scrimmage as Casey Williams ran about 73 yards around the left end to the end zone.  Royal Oak Shrine, on the other hand, put together 2 drives which consumed pretty much the rest of the first quarter.  If memory serves, at the end of the 1st quarter, we noted that MLS had the ball for about a minute and a half.

MLS managed to put on one more first half TD on a nice pass to Jordan Hayes who was streaking across the field at the 5 yard line and then turned it up for the go ahead TD.  As it turned out, it was the game winning TD.

The MLS defense turned up the heat.  Damon Pearce, having come directly from his grandmother's funeral (we gave him the ride) had a great game.  He sacked the Shrine QB on a key 3rd down play right in front of us.  Caleb (our favorite Cardinal!) also deserves a shout out for a really nice defensive play in breaking up a pass in the 2nd quarter.  That was neat!  (See the M-Live article below and scroll through the photos for a picture of that.)  In the meantime, MLS put up two more TD's, with Caleb Heyn and Casey Williams both going right up the middle in some nice holes produced by the offensive line.  The final score was a 28-7 Cardinals victory, bringing the Regional Championship trophy to the MLS squad.

You can read an M-Live article here.  If you scroll through the photos, you will find a nice one of Caleb deflecting a pass from a Shrine receiver in the 2nd quarter.

There are also a few TV highlights from WNEM which you can see here.  MLS is featured starting at the 1:50 mark.

Once again, MHSAA rules prohibit posting photos from the game, so here are a few post game photoes. 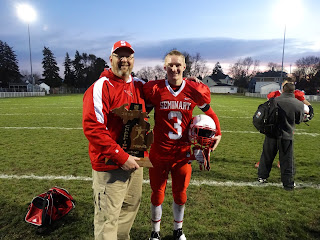 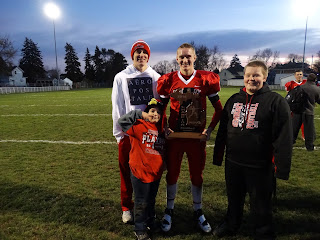 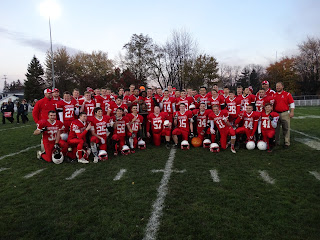 Posted by Pastor Thomas E Schroeder at 8:25 AM