The Guardian Building is a structure which is pretty unique to any sky line, and the décor on the inside is phenomenal.  The ceiling is one giant canvass painting which features pre-Columbian designs.  There are also two Tiffany clocks (they are back to back, one facing the main entrance and the other in the atrium), which are also very rare.  While the entire atrium is striking, the main feature is the state of Michigan mural which pays homage to various aspects of industry and commerce in Michigan.

While various owners over the decades sought to make "improvements" to the building over the years, their attempts at modernization have mercifully been stripped back to show the building in its (mostly) original state.  This gem has been polished, and it has been restored to its amazing original design.  It makes me wonder who thought it needed improvements because it looks great in its original context.

If you are downtown, go tour the Guardian Building--Saturdays and Sundays at 12 Noon or 2:00 PM.  Here are some photos to entice you. 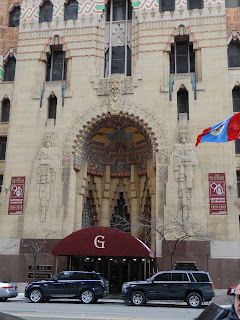 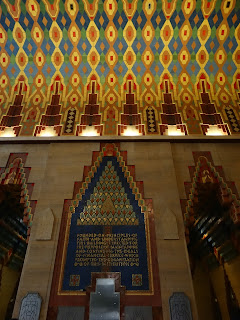 Posted by Pastor Thomas E Schroeder at 9:03 AM