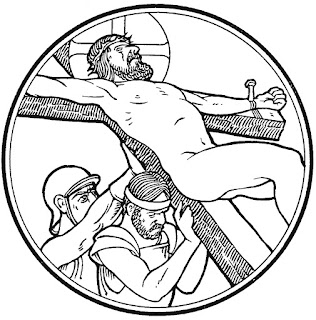 Seven Words from the Cross:
The First Word

After Jesus was sentenced to be crucified, he was entrusted to the Roman soldiers who would carry out his execution.  These soldiers may have been brutal and uncaring.  But why should they care?  All they knew is that a man was going to a cross because the governor had deemed his crimes worthy of crucifixion.  It was not their place to question the judgment of the governor.  It was their place to fasten Jesus' body to the cross so that he would die on it.  And they were good at that.
Did they know that this was the Son of God?  Did they hear the mocking of the crowd who repeated Jesus' words or retold his deeds?  Did they consider who Jesus was at all?  Probably not.  As experienced executioners, they knew that everyone who was being crucified would insist that they did not deserve it.
We are familiar with such things.  We insist our guilt should not count.  When we make a friend cry because we called her an idiot, we say, “I'm sorry you are upset.”  We are not sorry we called her an idiot, we are sorry it bothered her to be called an idiot.  When you damage someone's property by your reckless stunts, you insist, “I didn't mean to.”  When a boy climbs on a sculpture he should not have been on and gets hurt, the sculptor is assessed blame because he is the one who put it there.  We always try to avoid blame and responsibility.
Even if we act in ignorance, we are not excused.  God has written his law in our hearts, and he has declared it in his word.  If society has warped our sense of right and wrong, God does not accommodate his word to societal changes.  Even the ignorant are sinners.  God's desire is not that people remain in blissful ignorance, but rather know their sins so they would crave a Savior.
While Jesus acknowledged that the Roman soldiers did not know what they were doing—that this was no intentional assault on God—he did not give them a free pass.  He prayed, “Father, forgive them...”  Do not look upon their sins in judgment, but pardon them in your mercy.  Do not treat them as their sins deserve.
And this is precisely what Jesus was nailed to that cross for—to secure the full pardon for all our sins whether done in ignorance or weakness or habit.  Jesus did not fixate on what motivates your sins.  He fixated on paying the price for them.
“Father, forgive them, for they do not know what they do.” (Luke 23:34)  Jesus not only prays for forgiveness for the sinner, he provides it.