For whatever reason, I have been feeling somewhat nostalgic recently.  Perhaps it is the Christmas carols, some of which resonate from my childhood.  Maybe it was having all the kids home for Thanksgiving and soon again for Christmas, recognizing that these days of having everyone home at once will be harder and harder to pull off.

Anyway, a strange wave of nostalgia came over me on I-696 this morning.  I was noticing the license plate of a car next to me.  It was a Michigan plate, mainly blue, green, and white, which featured the Mackinac Bridge.  While the plates in Michigan, and there are numerous versions, are nice looking, somehow I was drawn back to the solid blue plates with the white lettering.

Hardly as pretty, but somehow still homey to me.  Those are the plates that every car in Michigan had for years and years.  If you played the road trip game of checking off plates from as many states as possible, that Michigan one was easy to pick out.  In fact, people who make pop art out of old license plates usually work with those blue plates.  It is a classic look. 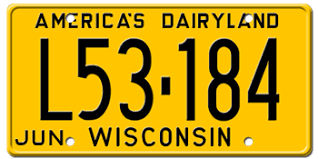 For that matter, I was even reflecting on the Wisconsin plates the same way.  When I was young, for the most part, Wisconsin had what was not-so-affectionately called the bumble-bee plates, solid yellow with black lettering.  Certainly, there is nothing endearing about the look.  The police must have loved them since they were so easy to read.  If you were out of state, the locals could recognize you were from Wisconsin in a heartbeat.  Perhaps ugly, but still unmistakable.  I suppose hardly anyone would want to go back to those license plates, but today I kind of missed them.
Posted by Pastor Thomas E Schroeder at 3:00 PM