This past weekend wrapped up a number of lasts for the Schroeder family.  It was the last games of the season for both JV and varsity.  It was Philip's last football game on the JV level.  It was Caleb's last home game, and it was his last game of high school football ever.  In the photos below, you will see his last catch which ended up completing a 2-point conversion.

Unfortunately, both games were heart-breakers.  On Thursday, October 19, the Michigan Lutheran Seminary JV Cardinals traveled to New Lothrop.  Laura and I could not make this last game because we were sitting in the Secretary of State for three hours.  Grandpa Schmidt got to represent the family.  His updates let us know that MLS was down 14-0, then came back to grab a 21-14 lead, only to lose in the final seconds 26-21.

The MLS Cardinals welcomed the Hornets of New Lothrop for the varsity contest on Friday, October 20.  It was Parents' Night, but Laura could not make this one either.  Peter had a living history presentation he had to make for St. Paul's.

New Lothrop was a big team who ran their offense well.  MLS went into the locker room at halftime down, 14-7, but grabbed a lead in the 3rd quarter, 16-14.  Unfortunately, MLS could not put together any long drives, and New Lothrop continued to make theirs.  The final score was 35-24.

There are no photos from the JV game since I wasn't there, but here are some from the varsity game. 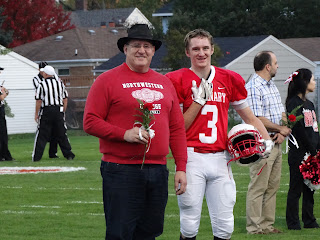 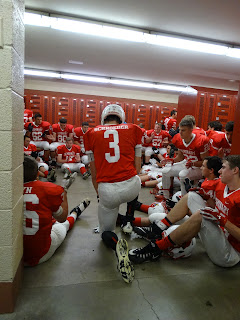 Posted by Pastor Thomas E Schroeder at 8:14 AM