Thursday, June 7 had us heading early into Arches National Park.  As much as people may have wanted to sleep in a bit, I have learned from experience that a liesurely morning also means a LONG wait to get into a national park.  We took some short hikes, spending most of our time at the Windows.  But we had tracks to make to get to Phoenix by Thursday night.  We also had to get back to our KOA and get checked out by noon.  I think we pulled about about 12:05.

We drove south, making it a point to hit US Highway 163 and drive through Monument Valley which has some of the most iconic out-west scenery there is (photo below).  We entered Arizona, found a Pizza Hut in Flagstaff, and got to Phoenix as the sun was getting low.  We tried to find camping in Phoenix so that we would be close to Faith, but nothing worked for us--mainly because the campgrounds wanted only people 55 and older in self-contained RV's.  Since it was getting dark, we called Faith and arranged to sleep in her apartment.  The down side?  Some had to sleep on the floor.  Upside?  Air-conditioned!

We got to see Emmaus Evangelical Lutheran Church and School where Faith had been teaching for the past year.  (Laura had seen it in July 2017 when she helped Faith move in.)  Besides packing up her apartment, we enjoyed a Mexican meal with her faculty.  Pastor Else, my friend from college days and fellow lineman on the football team, picked up our bill.  (Thanks, Ross!)  Then we went to tour the University of Phoenix Stadium where the Arizona Cardinals play.  We missed the tour on Friday by minutes.  And while we did make the tour on Saturday, it was full.  Only three of us got to go.

On Sunday, June 9, we went to church at Emmaus who put together a nice Farewell for Faith.  More on that in Part 3.  Here are some photos from Thursday - Saturday. 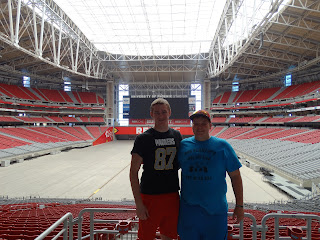