We were in South Dakota, Minnesota, and Wisconsin before our final drive to Michigan.  We had rolled into South Dakota on Saturday, June 16, and made a quick trip to Custer State Park to see the bison herd.  Then we went to Crazy Horse Monument at night to see the light show.  Instead, we saw low cloud cover in the rain.

We returned to our Custer KOA campsite for a cool, rainy night.  This was a far cry from the weather in Phoenix and Utah.  On Sunday, we got up and knew we had to make tracks.  We took down our wet camper and went to see Mt. Rushmore.  Peter had been wanting to see this since Kindergarten.  The "wow" factor was pretty low since the rain and clouds dominated our view.  We took pictures right after we had gotten there--which was a good thing since the clouds covered it shortly afterwards.  It was also very chilly (50 degrees or so), so we joined all the other tourists in the gift shop.  Peter's long-deliberated choice of a souvenir was a stuffed bison.  He named it "Jim" after Jim Halpert from The Office.

Our stay at Mt. Rushmore was brief, which was just as well since we had a lot of driving to do to get to Minnesota.  We began the drive through the Black Hills to get to I-90 near Rapid City.  Since it was so wet, we had skipped breakfast at the campground and promised to take the kids out to eat at some restaurant.  It was also Fathers' Day, so we ended up having to wait about an hour for seating.  Nevertheless, hunger must be satisfied, so we waited it out.  It also improved our moods.

From there, we drove all day Sunday across South Dakota and into Minnesota.  We got to New Ulm and drove to Flandrau State Park to set up the camper in the dark.  I was happy to get the camper up since it had been wet when we took it down.  As it turned out, we had rain all night in New Ulm, so drying out would have to wait.

We moved Faith into her apartment on Monday, June 18.  Philip had requested a walking tour of the Martin Luther College campus since he has intentions to be a pastor.  We visited the Chapel of the Christ and later took a trip to the Campus Store.  We had hoped to take a Schells Brewery tour, but we did laundry instead.  Oh yes, we know how to entertain our children!  We went to church at St. Paul's Evangelical Lutheran Church on Monday night, and talked to our kids about how Laura and I went there together when Laura was at Dr. Martin Luther College and I came to visit her.  Some stories we tell just to prove that we are old.

We bid farewell to Faith on Tuesday, June 19.  Then we drove to Wisconsin, planning to stay in Sheboygan with my parents.  Blow out #4 happened on I-90/I-94 just south of Tomah, WI.  This wsa the worst of the blow outs because it took place on the driver's side.  The freeway was three lanes wide, and the traffic never stopped coming.  I pulled over as far as possible and put a little angle on the camper to give myself a little (emphasis on little) shelter from the on-coming traffic.  Eventually, I just took the attitude, "Well, if I die, I die.  I can't think of traffic if I actually want to get this camper tire changed."  God blessed our efforts.  No one was killed, and we got back on the road.  We dropped off Caleb to see someone in Manitowoc, and then made it to Sheboygan about 8 PM or so.  (Caleb was dropped off later.)  We also got to pop up the camper so that it could finally dry out after several rainy days and nights.

Our stay in Sbeboygan was brief.  We left the next morning, ready to get settled back home.  The last day of the trip, Wednesday, June 20, was pretty uneventful (thankfully!).  We got back home in the evening and decided most of our unpacking and settling could take place the next day.  We thanked God for our travels and that we got back safely.  Whatever glitches we had faced amounted to inconvenience, but they were never a threat to life or limb.

Of course, reviewing these photos makes me want to go on vacation again.  Shrug.

Below are photos from the last leg of the trip. 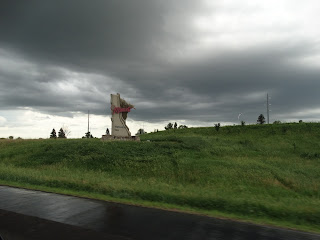 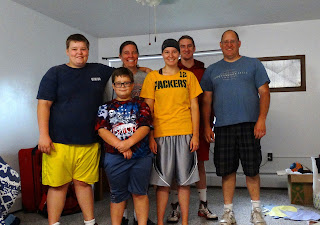 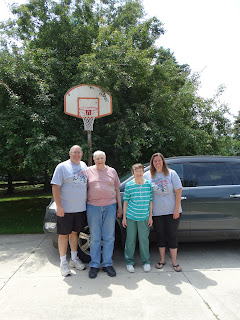 Posted by Pastor Thomas E Schroeder at 8:00 AM