Something from ... Luther re: Relying on God's Word 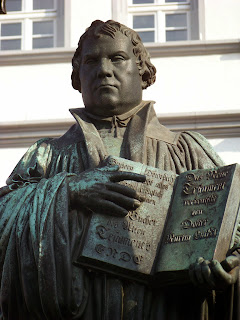 One of the reasons Martin Luther was so fervent, even belligerent, in his teaching and preaching is because he had spent a good part of his life in fear and doubt.  He wanted to be sure God loved him and was merciful to him.  He wanted to know that he was, indeed, saved.  But how could he know?  Where could he turn for assurance?  Sadly, the church of his youth pointed him to many different directions.  But fear and doubt were not ended.

When Luther discovered God had made promises which put an end to his doubts and fears and which gave assurance of God's mercy, love, and salvation, Luther developed a great disdain for all of those other places where he had been told to find them.  Since they did not have God's word attached to them, they were useless.  Worse, they were damning.  That is why Luther preached so strongly against them.  He did not want anyone else to endure the fear and doubt which had plagued him so much.

In speaking of the Tree of the Knowledge of Good and Evil, Luther noted that the tree killed and cursed only because of the word attached to it.  Likewise, the sacraments are only effective because of the word which is attached to them.  If we desire God's love, mercy, and salvation, we flee to where God says that we will find them.  Any other direction is wrong.  And trusting in practices, feelings, or anything that does not have God's promises attached to them actually brings a curse--for they are idolatry, no matter how religious those things appear.

From Luther:
"It is certain that the tree did not have this power by its nature but only through the efficacy of the Word.  In the same way also the tree of knowledge of good and evil did not kill because its fruits were poisonous and destructive, but because a word or kind of label had been attached to it with the warning written on it: 'On whatever day you eat from this tree, you will surely die.' ... The tree was not poisonous; but, as we said above at great length, it was a tree of divine worship, for man to bear witenss through his obedience that he knew, honored, and feared his God.
"Therefore the Word must always be taken into consideration and honored as that by which God takes hold of and, as it were, clothes the creatures; and a difference must be made between the creature and the Word.  In the Sacrament of the Altar there are bread and wine; in Baptism there is water.  These are creatures, but creatures apprehended by the Word.  As long as the creature is apprehended by the Word, so long it is and does what the Word promises.  ...
"Always consider here whether God has added His command and promise.  If there is no promise and command of God, decide at once that it is idolatry and a desecration of the name of God. ...  But do not concern yourself with prayers, with examples, or even with the intention.  Consider only whether there is a promise and a command; for this is what imparts to the creatures a new power beyond that power which they have through their nature." (Luther's Works: American Edition, Vol. 1, pages 226-229)
Posted by Pastor Thomas E Schroeder at 6:01 PM

Email ThisBlogThis!Share to TwitterShare to FacebookShare to Pinterest
Labels: Christian life, faith, Martin Luther, Something from..., Word and Sacraments