On Saturday, March 16, the Local Tourist went to the Fisher Building and took a free tour which is run by Pure Detroit.  The tour was excellent (Do it!  Did I mention it is FREE?) and covered the history and the most vivid and beautiful parts of the Fisher Building.  The Fisher Building is called Detroit's largest piece of art.  It lives up to the name.  Sadly, finances prohibited the original design of the building from being completed, which would have meant two more towers similar to the one below.  The middle tower was designed to be 60 stories, flanked by two 30 story towers.  Only one of those 30 story towers ended up being built.  The Great Depression halted further construction.

WJR likes to boast that they broadcast from "the golden tower of the Fisher Building."  It originally had gold leafing on the peak of the tower, but during World War II, it was covered so that it would not present itself as a target to an enemy attack.  Once the black covering (I think they said asphalt) was removed, the damage to the gold leafing resulted in its removal.  It was replaced with the green terra cotta which is still there.  You can see a little bit of it on the picture below.

Here are a few photos from the Fisher Building.  If you go, prepare to look up a lot! 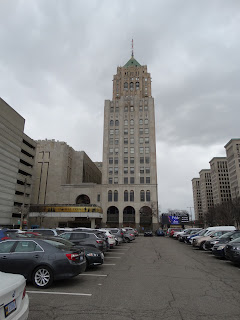 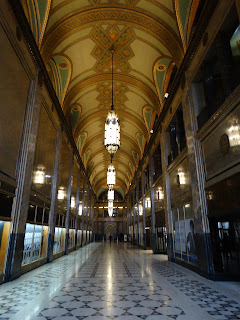 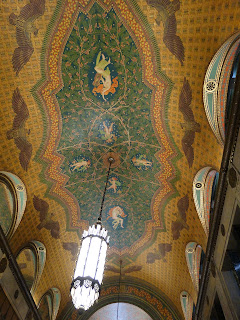 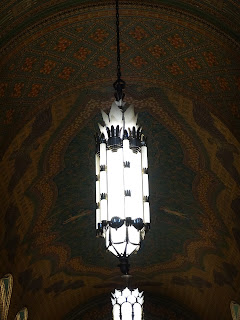 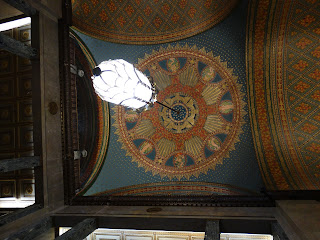 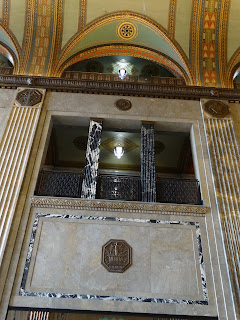 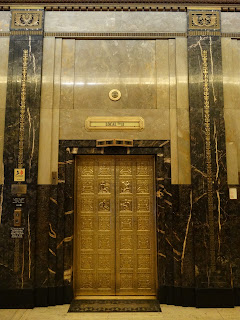 Posted by Pastor Thomas E Schroeder at 9:38 AM