Michigan Lutheran Seminary played against Ishpeming in the state semi-finals on Friday, November 22.  We traveled to the neutral site (6 hours for MLS, 15 minutes for Ishpeming) of the Superior Dome in Marquette, MI.  MLS came up short, 22-18, against the two-time reigning state champ Hematites of Ishpeming.

It has been a few days since the game, so I can be a bit more detached while I write about it--though to be honest, I still can't help but pick things apart and play the "what if" game as well as anyone else.  But I will try to highlight a few reflective thoughts about the game.

1)  Each team scored three TD's.  Ishpeming scored on 2 of 3 PAT attempts; MLS missed all of their PAT attempts.

2)  Ishpeming executed their offense exceptionally well.  They did little that surprised MLS, but MLS was still unable to stop them.

4)  The Superior Dome was hot and loud.

5)  Andrew and Casey Williams combined for over 250 yards receiving and 3 TD's.

6)  It is very hard to take photos of a game and to watch it at the same time.  I took some wonderful shots of the roof of the Superior Dome.  There was fascinating action going on below those photos.

7)  Rethinking the game, replaying some of the plays, and second guessing what happened has still not produced a single additional point to the final score.

8)  Players who worked so hard and had such lofty (and in my opinion, reasonably so) goals need not feel any shame when they cry after the game.  It hurts because it matters that much; and they got this far because it matters this much.  At this point in the season, only one team is going to end their season happy.  The other teams may leave the field sad or dejected, but they should also leave the field proud.  The MLS team accomplished great things this year.  We are all proud of them, and we wish they could have gotten to Ford Field this weekend.

9)  My own high school football career was pretty sad, experiencing victory only 4 times in three years on varsity (and three of those in just one season!).  Even if I had experienced success, I still think I would have enjoyed watching my own children's success more than having success myself. 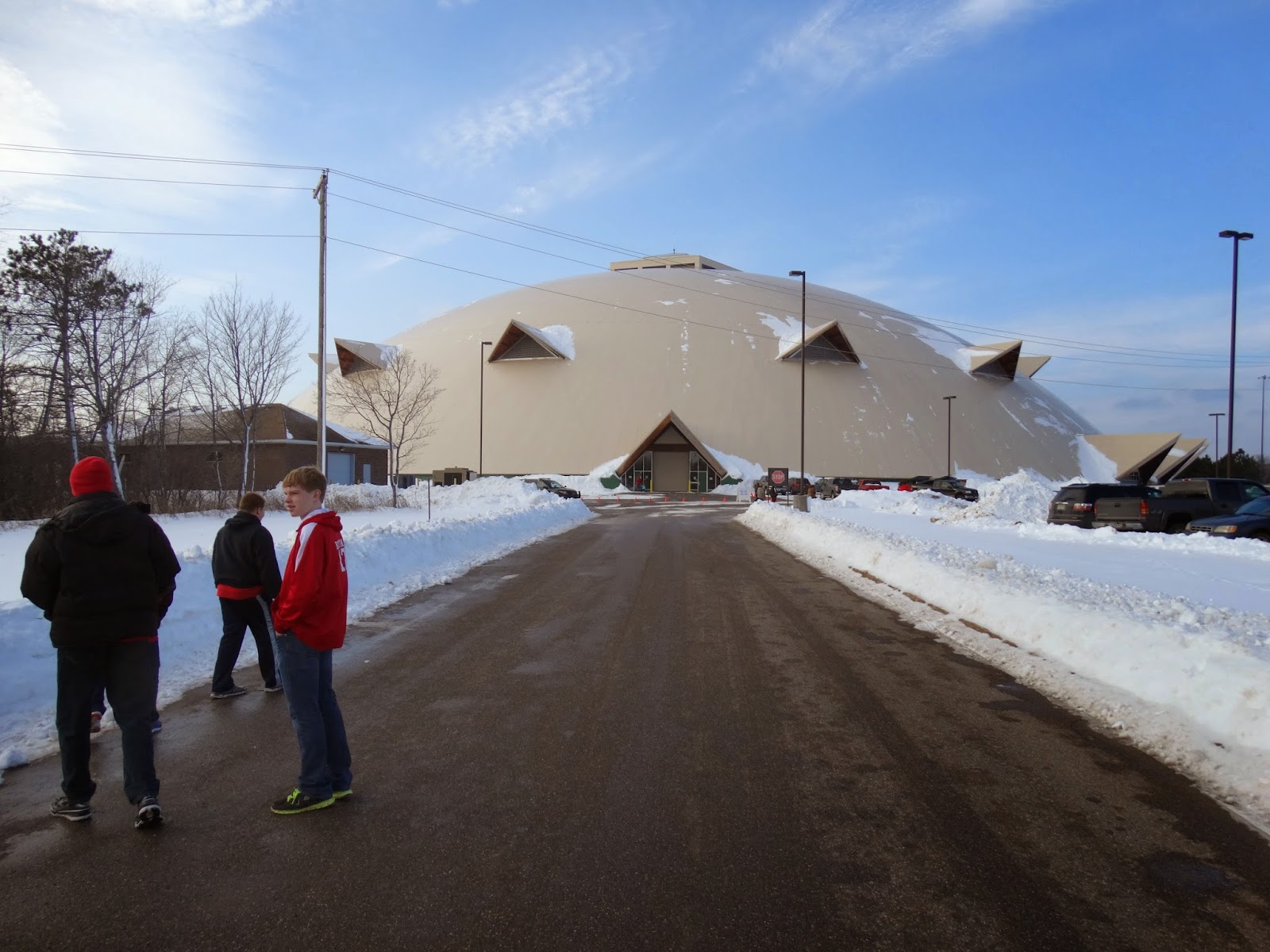 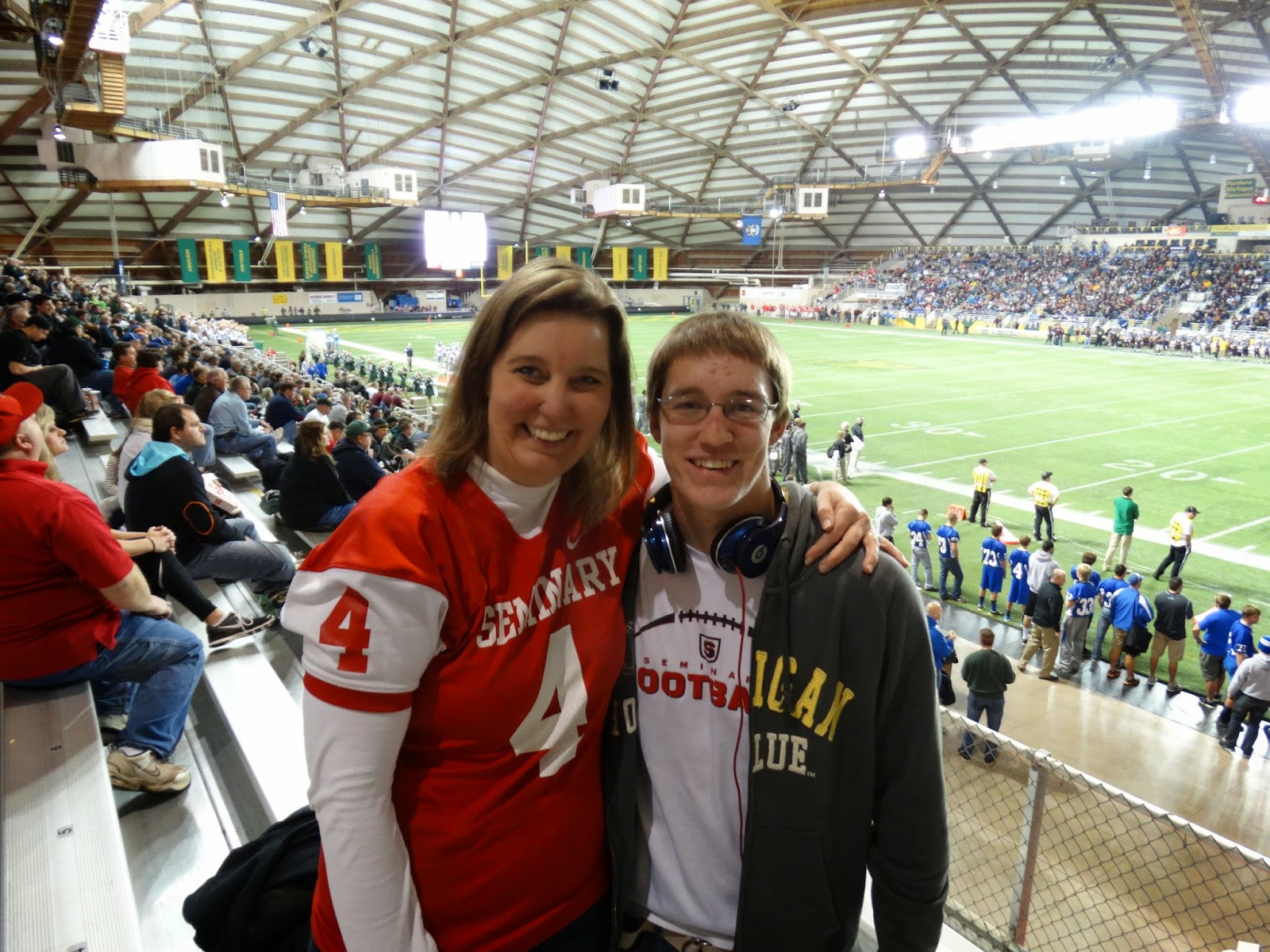 Laura and Nathanael enjoy a moment of optimism before the game begins. 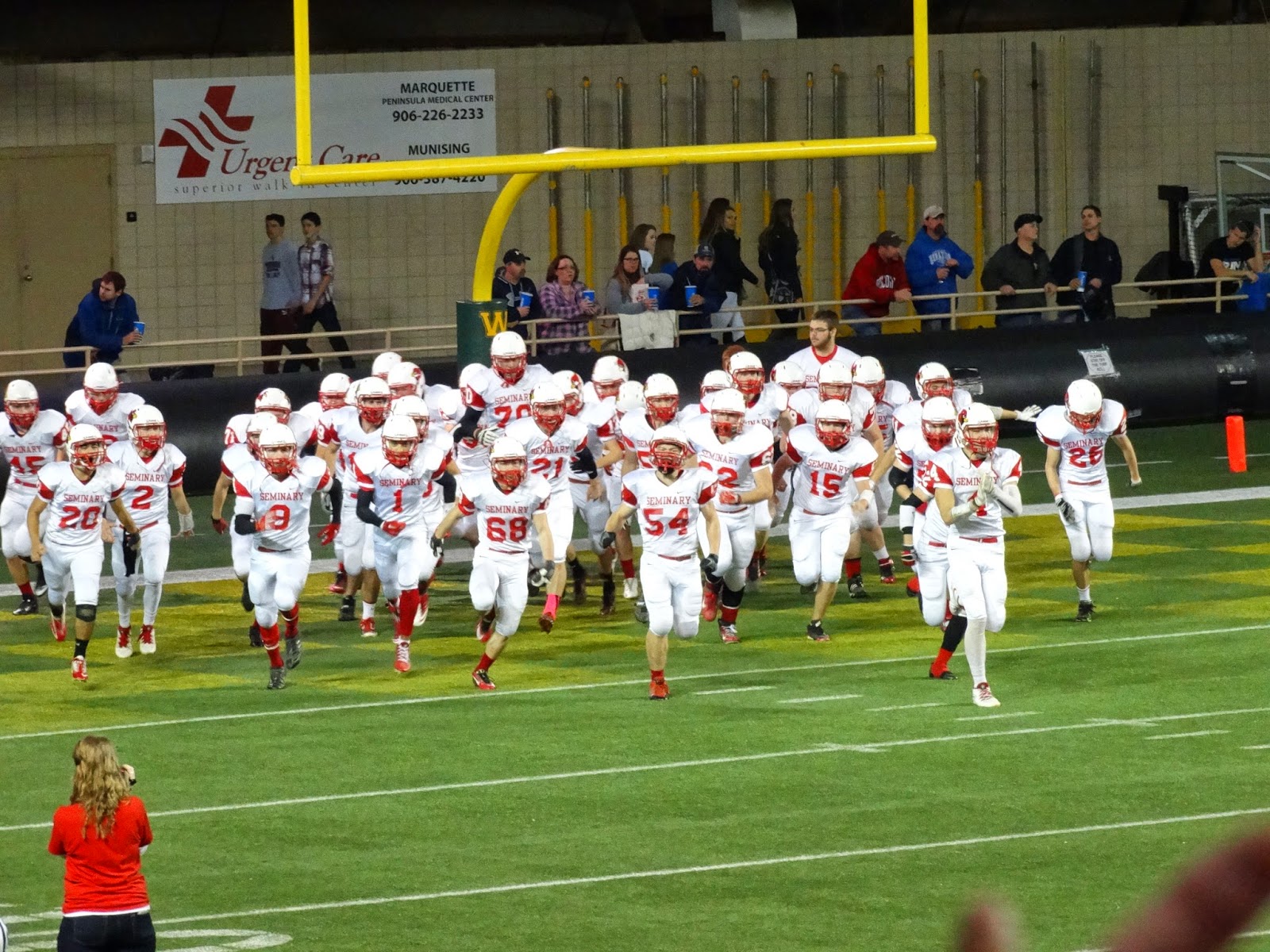 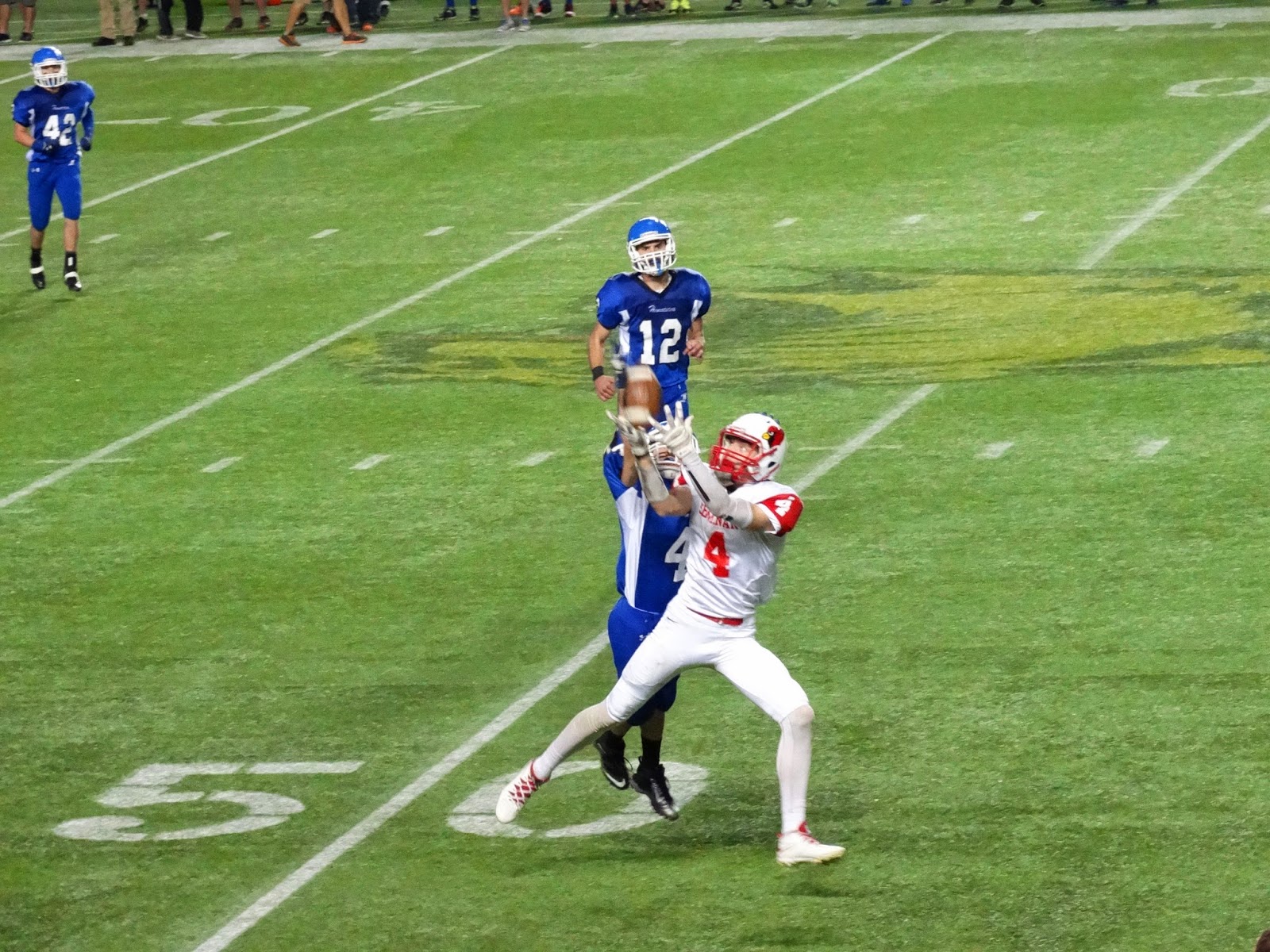 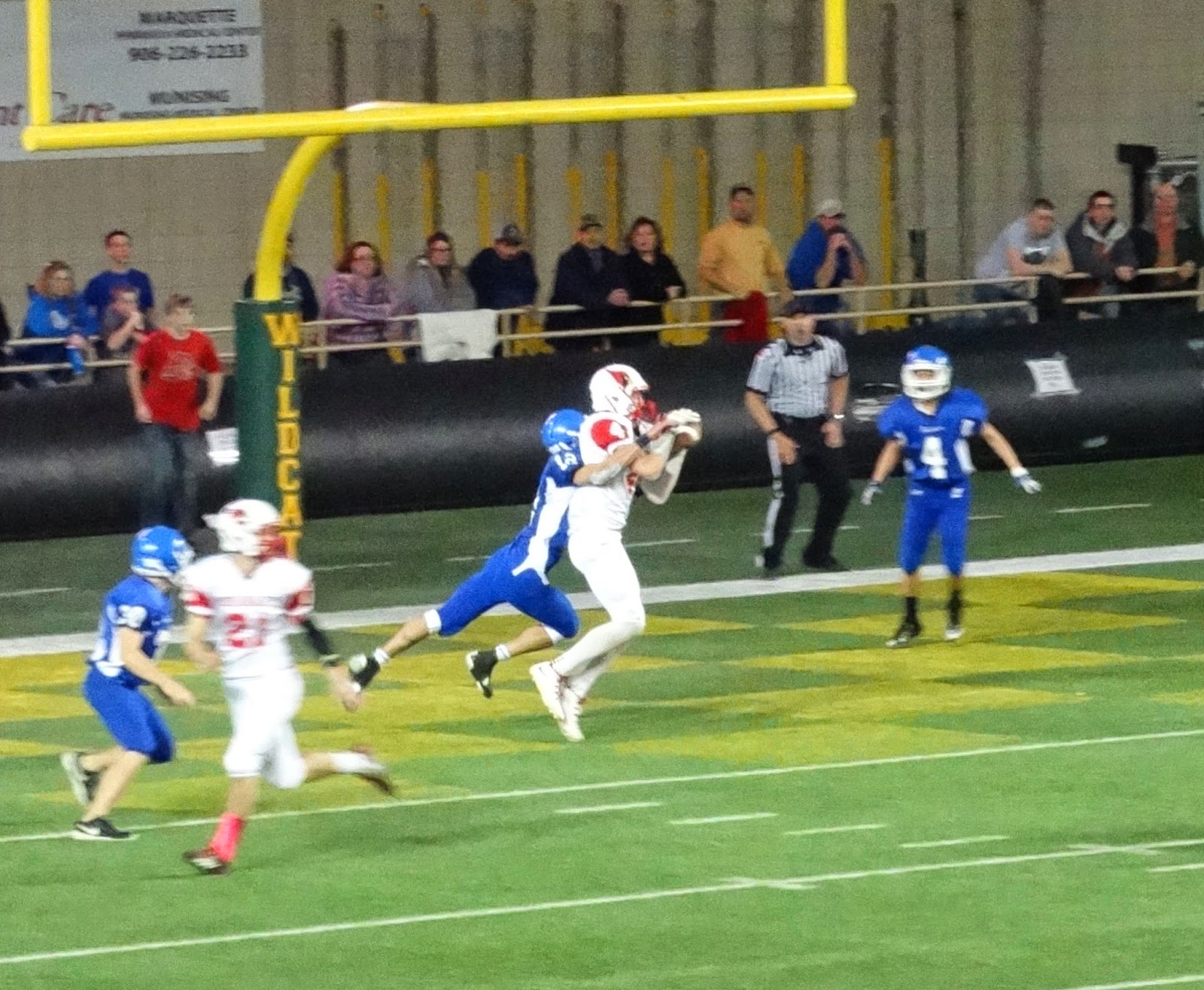 This was a 2 point conversion attempt.
#12 from Ishpeming put on a good hit as soon as the ball got there and jarred it loose. 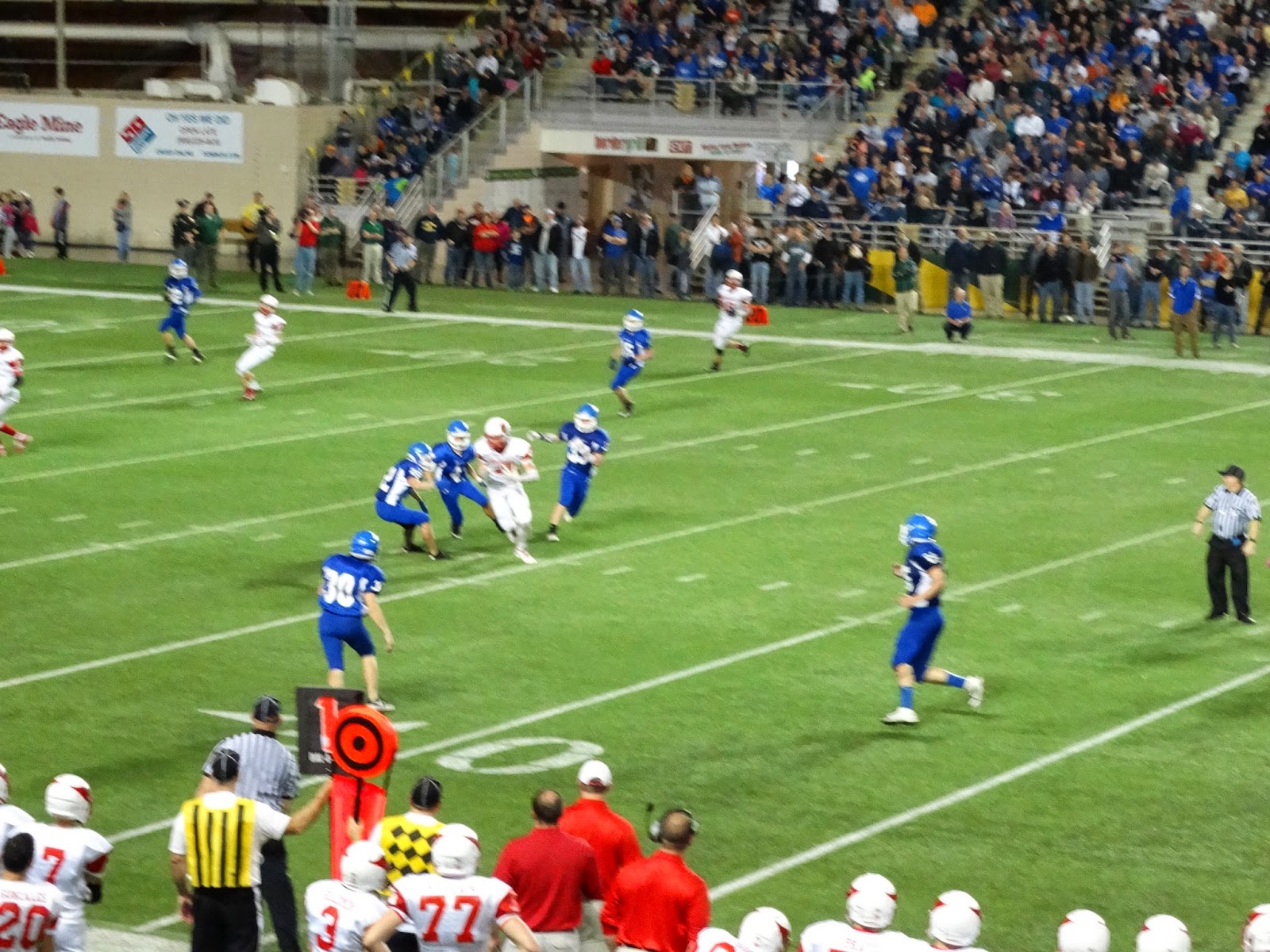 Andrew caught another late in the game on MLS' last drive.
Casey later got the TD, but the on-side kick attempt failed and time ran out.
Posted by Pastor Thomas E Schroeder at 9:27 PM