Last Friday, Michigan Lutheran Seminary went on the road again, to face an undefeated opponent ... again.  This time it was against Laker High School who had high hopes for advancing.  With an undefeated season, who could blame them.

On the other hand, MLS has been relishing the place of underdog.  In MLS' first playoff contest, they probably did not respect their opponent as much as they should have.  You can blame the windy weather for changing the game plan, but Manton gave MLS all they could handle until last minute TD's made everyone breath a little easier.  But the breathing did not come easy until there were 2 minutes left in that game.  In contrast, MLS fans have been able to breathe easy by the end of the 1st quarter in each of the last 2 games.  MLS grabbed a 21-0 lead against Laker by the end of the 1st quarter.

Laker posted a TD toward the end of the half, shaving the lead to 21-8.  But the momentum swung right back to MLS on the next drive, which began near mid-field.  A hook-and-ladder (or lateral, for you purists) play resulted in a long TD.  The pass was to Andrew who pitched it to Casey Williams, who ran about 100 yards across the field and to the end zone for the TD.  Officially, I think it was a 44 yard TD.  On the ensuing kickoff, Laker had trouble handling the ball.  MLS got it at about the 15 yard line.  In just moments, Andrew had a diving catch for a TD.  So MLS went into halftime with a comfortable 34-8 lead.

The second half saw the defense refuse any points to Laker, while the offense tacked on 10 more, making it a 44-8 final and a regional championship.

To say that we are giddy about all this success is an understatement.  MLS will go on the road again to a -- ahem -- neutral site.  We will play 2 time defending state champs Ishpeming at the Superior Dome in Marquette, MI.  From Novi, we are budgeting about 8 hours of travel time.  Ishpeming should only need a gallon of gas to travel their 15 miles to the Superior Dome and back.  I hope our trip home is happier than theirs.  I know it will be longer.  (By the way, I have to admit that I find it fun to say the word "Ishpeming.")

Having this much success can't help but garner some attention from the local (that is, Saginaw-local) media.  You can check out a TV spot here.  And M-Live has a few articles -- here, here. and a preview article for the game against Ishpeming here.

Otherwise, here are a few of my photos from the game against Laker. 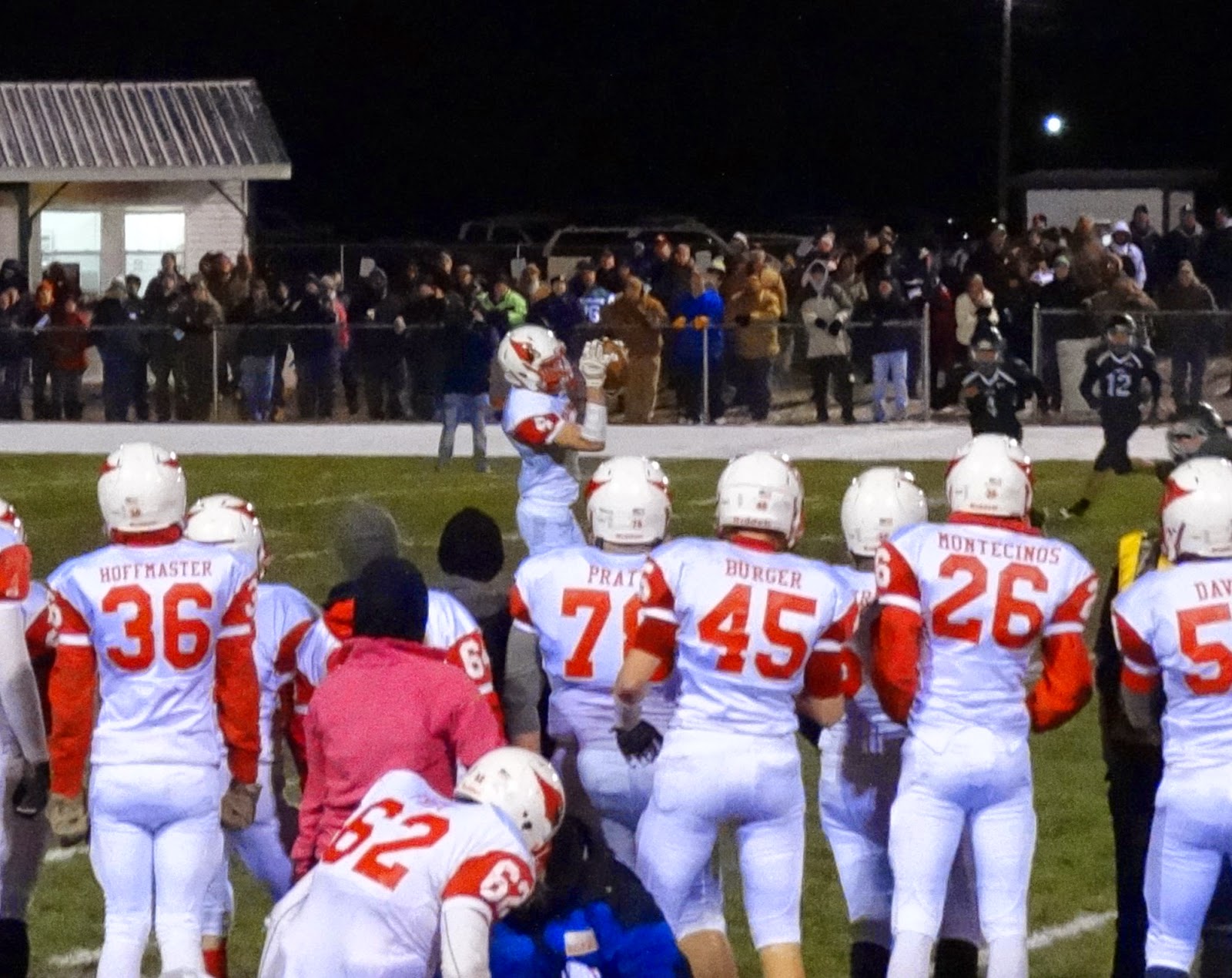 One of many first quarter catches. 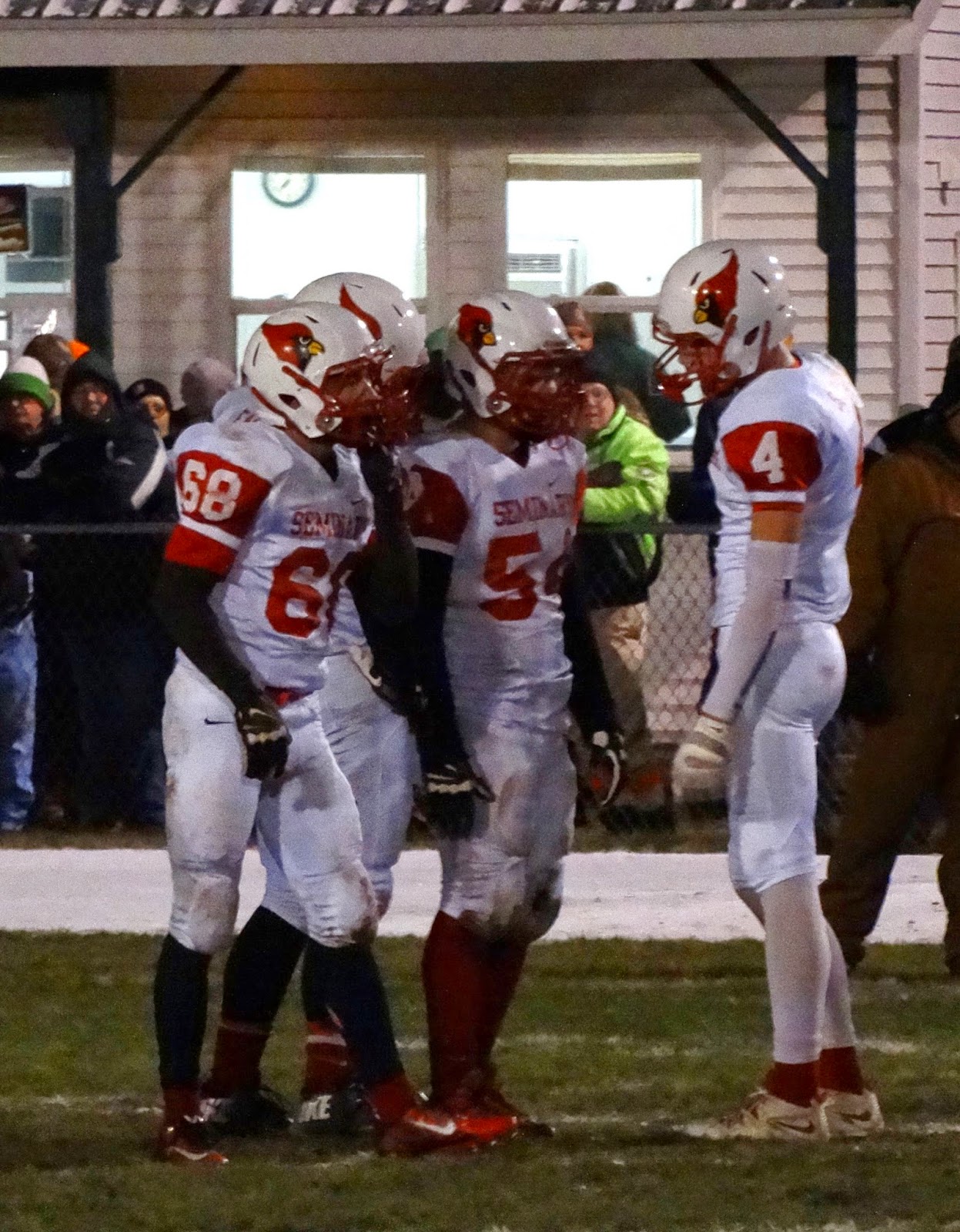 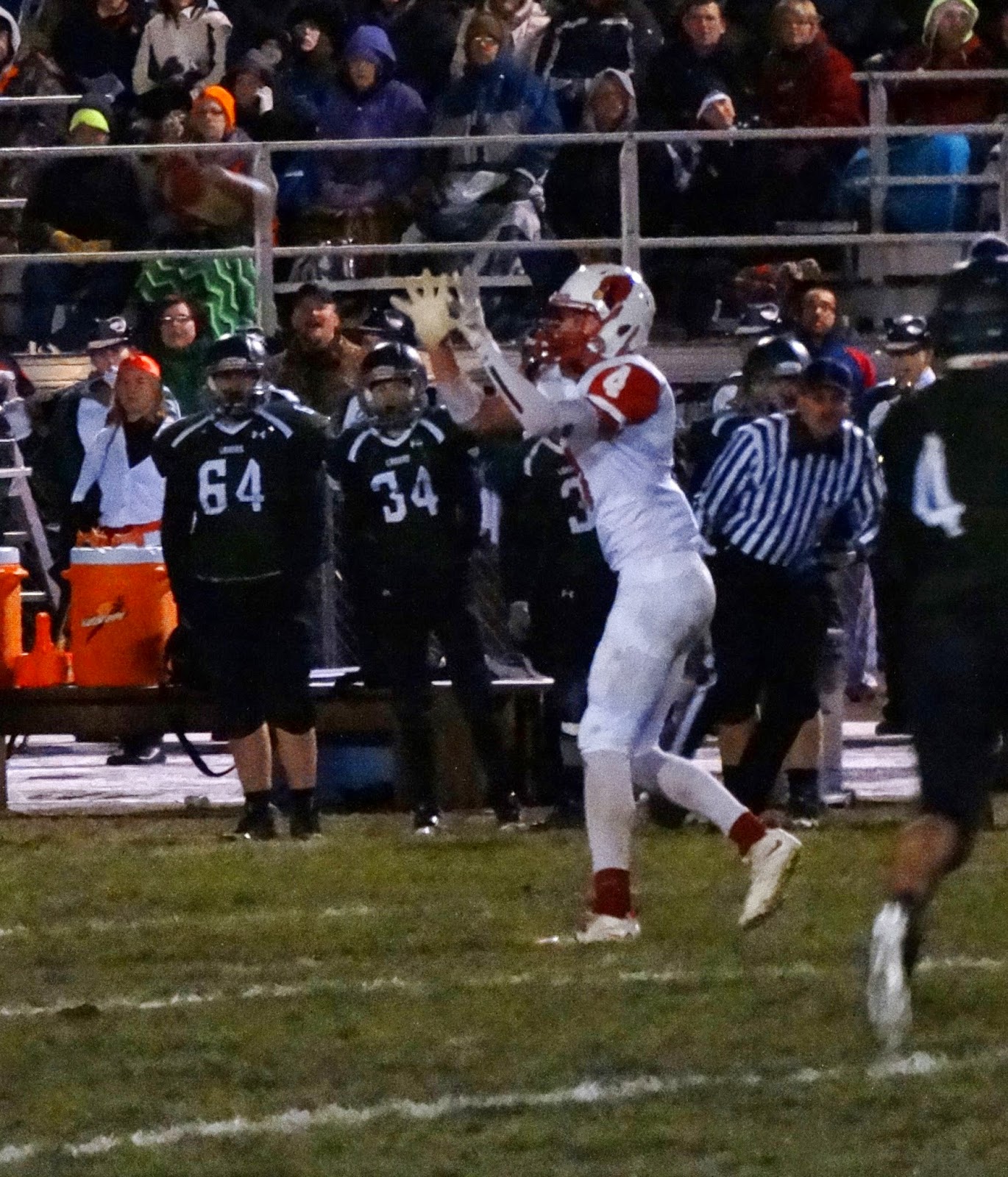 Here, Andrew consults with our two              This is the catch that began the hook-and-ladder.
defensive linemen, Dan Gensmer (68)
and Keith Brassow (54), both of whom
are undersized for defensive tackles,
but both of whom play HUGE. 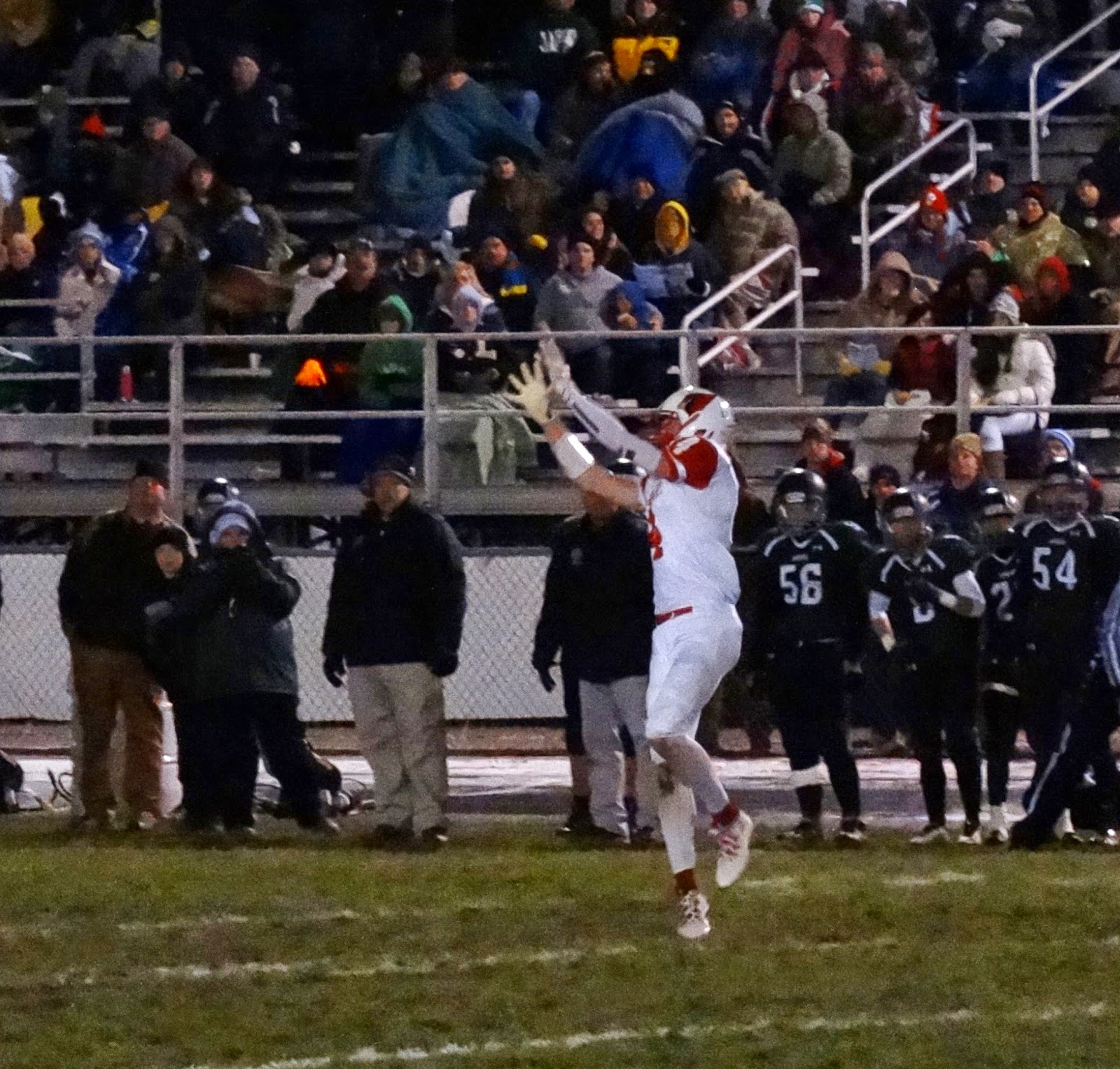 Another catch in the second half.

I did not get the TD catch, as it was on the far side of the field and there were Laker players blocking my view. 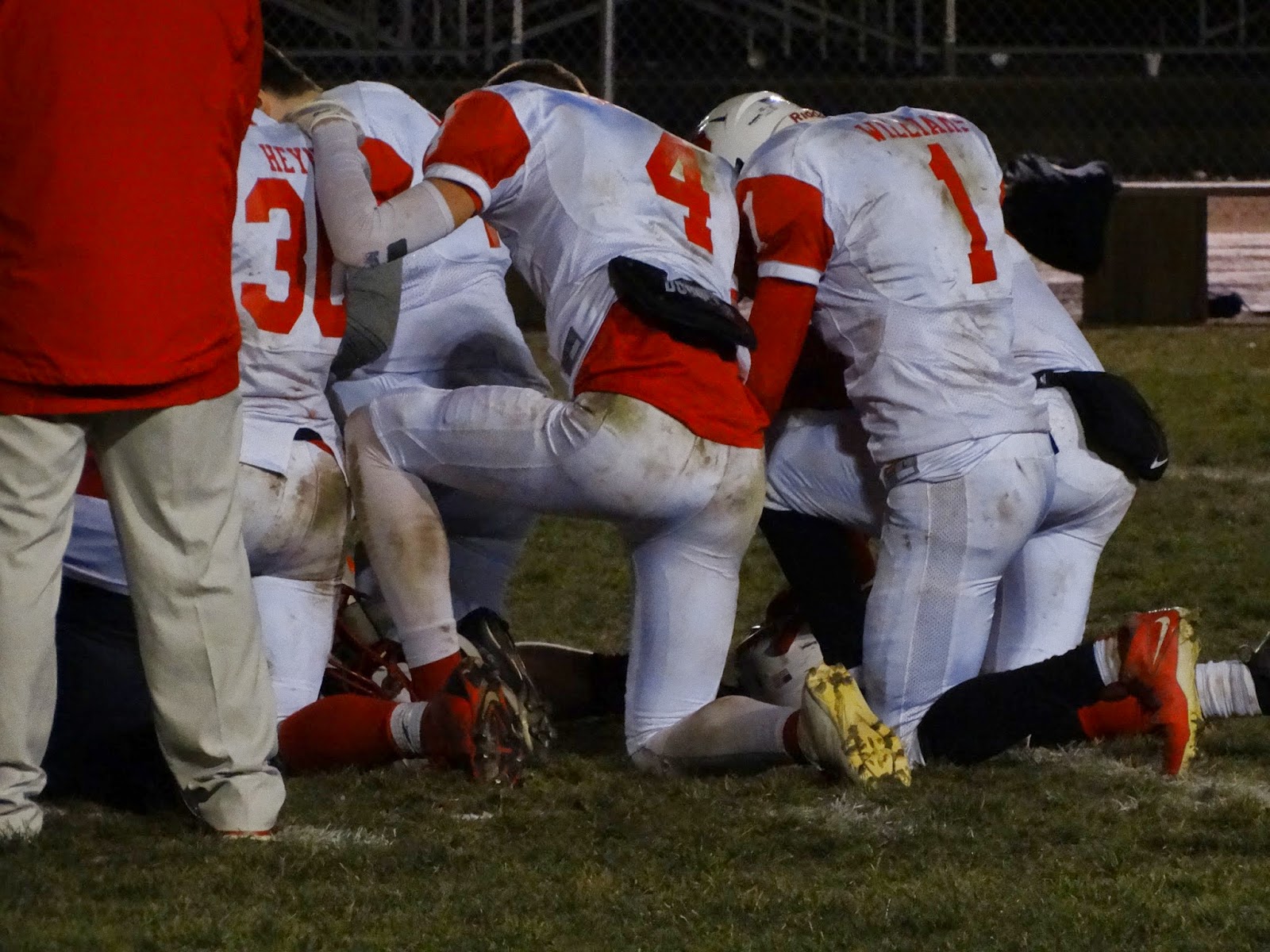 After every game, the coach leads the team in prayer. 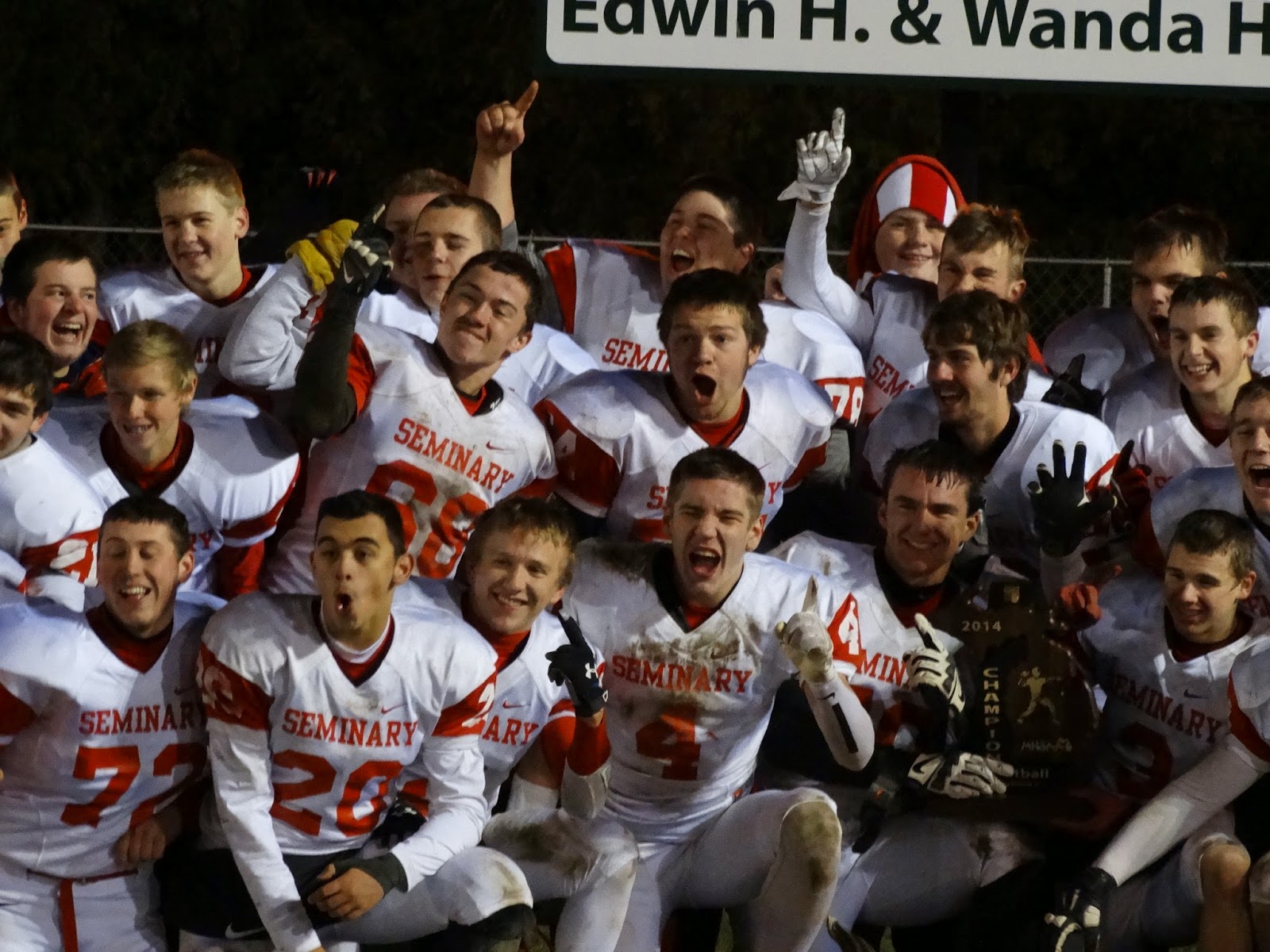 The euphoria of being regional champs!!! 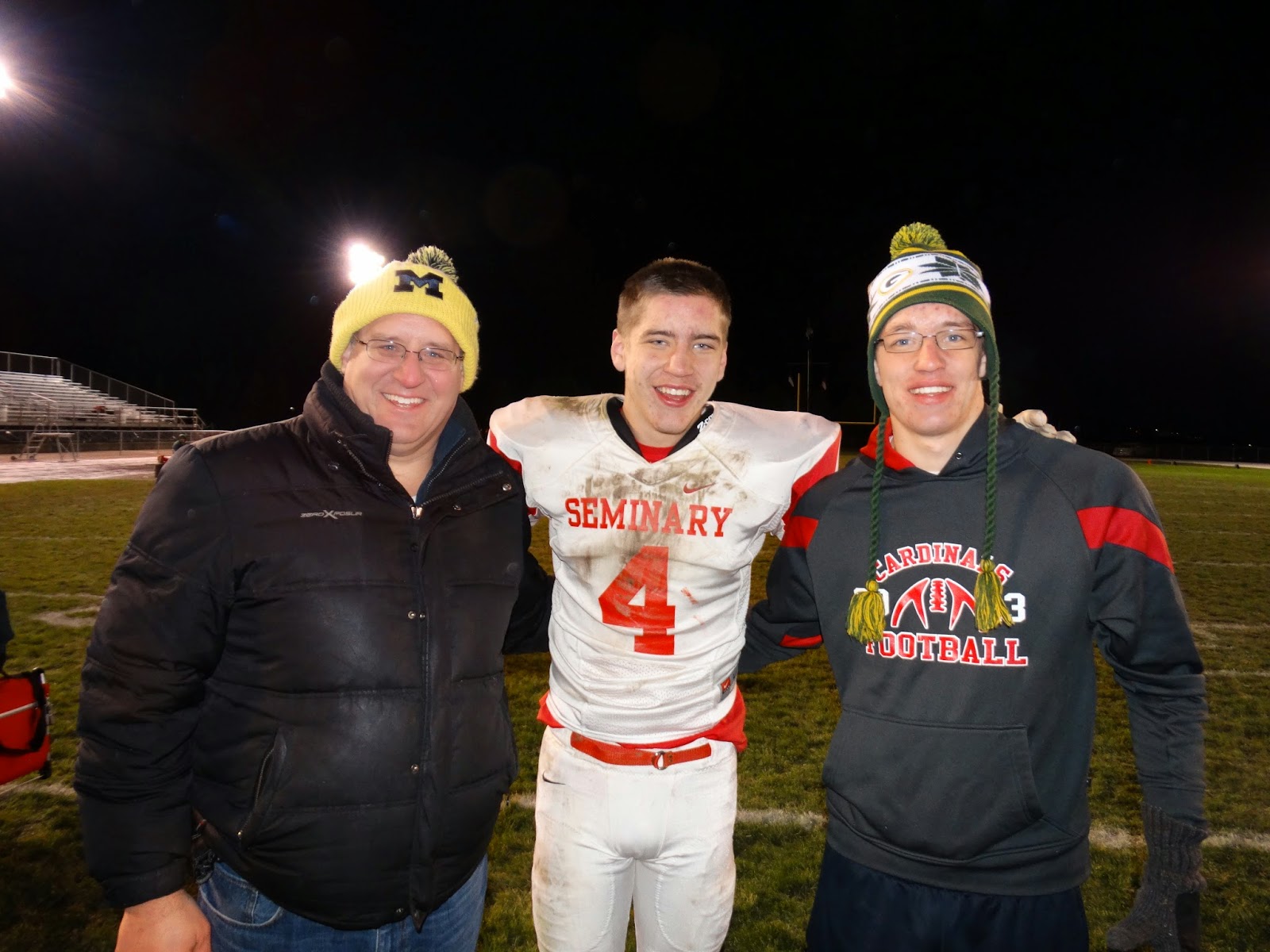 Nathanael has logged a good number of hours on the road from New Ulm, MN to see a few of MLS' games this year.  He has plans to get to Marquette on Saturday, too.  I know he would have loved to have been a part of this playoff run, but life moves on to other things when you graduate.  In any case, it is really cool to see how much he is enjoying this ride--as much as if it were his, too.


Posted by Pastor Thomas E Schroeder at 9:51 AM