Football officially began last night at the home of the Bath Bees.  Michigan Lutheran Seminary took the field, and the MLS fans stared into the sun for 3 quarters of football.  By the 4th quarter the sun had set and we got to watch without squinting, shading our eyes, or going blind.

Both sides exchanged TD's in the first half with Bath's coming on the final play of the half.  MLS had driven the ball pretty well but managed to sputter out a few times as they neared the end zone.  The story was pretty much the same for Bath.  Both teams gave up turnovers deep in their opponent's territory.

Bath was driving the field, and we were all watching the clock tick down.  On 4th and short in the red zone, Bath ran the ball and got stuffed.  MLS had a long way to go and under 2 minutes to go the length of the field.  We did not expect the final drive to go as it did.

QB Adam Arrowsmith threw a long pass into double coverage.  Caleb, who had outgrown his defenders, also outjumped the defenders and came down with the ball, getting us to roughly mid-field.  Later, another pass to a wide open Caleb added about 15 more yards.  The late hit out of bounds should have added more yards, but apparently tackling someone 5 yards out of bounds was conisdered fair play by the men in stripes.  Just a few plays later,

Arrowsmith threw to the back of the end zone where Caleb, again in double coverage, outjumped and out wrestled the defenders for the game winning TD with :14 left on the clock.  MLS wins, 20-14!

I would hate to think Caleb's sophomore season has already peaked, but it sure was a nice way to start the year.  Photos below. 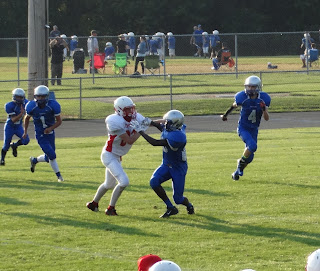 Posted by Pastor Thomas E Schroeder at 8:33 AM