Local Tourist -- The Wreck of the Edmund Fitzgerald

It was 40 years ago, on November 10, 1975, that the Edmund Fitzgerald went down in the waters of Lake Superior, just northeast of Whitefish Point, Michigan.  (The wreck site is actually closer to Canada.)  A mammoth Great Lakes freighter, the largest of its kind at the time, became a victim of the nasty weather that can hit the Great Lakes.

I can't say I remember this when it happened, although I was almost 8 years old when it did.  Nevertheless, I have to say that I am fascinated by it.  I have visited the Great Lakes Shipwreck Museum in Whitefish Point several times to see the bell from the Fitzgerald.  The lifeboats are in a Valley Camp Museum in Sault Ste. Marie, Michigan.  (The Great Lakes Museum is inside a retired, docked freighter.)  And one of the anchors is at the Dossin Great Lakes Museum in Detroit.  (It had fallen off the ship when it was docked in the Detroit River and was recovered many years later.)  I still have not popped into the Maritime Cathedral in Detroit, though.  Sounds like a visit for the Local Tourist someday.

Here is the Gordon Lightfoot song, The Wreck of the Edmund Fitzgerald.  This particular video includes TV footage from the 1975 report of the shipwreck, footage of the Fitzgerald, and the names and photos of the captain and crew of the Fitzgerald.  Very nice.  (NOTE: If you do manage to get up to Whitefish Point in the U.P. to visit the Great Lakes Shipwreck Museum--worth your effort!--prepare to hear this song a LOT while you are there!  You have been warned.) 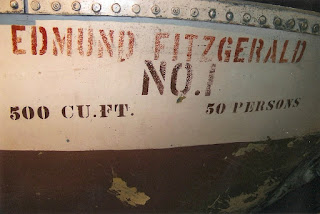