Traveling with the Schroeders -- MLC Basketball

The Schroeders hit the road this past Friday to see Faith play basketball in Milwaukee.  This game was the closest game she would play to us by far.  We were not able to make it in time for the Friday contest against Calvin College, but we saw the MLC Knights play Finlandia on Saturday.

The first leg of the trip took us to Sheboygan where we spent the night with my parents.  We were hoping to beat a snow storm before we got there, but we hit the worst of it on the north side of Chicago.  Once we hit the Wisconsin state line, the snow lightened up quite a bit.  By the time we reached Port Washington, WI, the snow had stopped.  We got to Sheboygan late, and then woke up to snow there.  (Peter woke up at 5:30 AM CST -- of course, not on a school day).

After a nice visit with my parents, we went down to Wisconsin Lutheran College to catch the game.  The MLC Knights won, pulling away in the 2nd half, 82-65.  If memory serves, Faith tallied 6 points on the afternoon.

We got to visit with Dan & Liz Schmidt and their children, Grace and Nathan, during and after the game.  They made the trip because they had never seen Faith play before.  (Now we have to return the favor and fly to Riverside, CA to see Emily play.)  Then we got to visit with Faith for a while before she had to pack up and start to make the long trek back to New Ulm.

We headed out of Milwaukee about 4:00 PM or so and made the long drive back to Michigan.  The drive was made especially longer because of painfully slow traffic in downtown Chicago and because of very heavy lake-effect snow in southwest Michigan.  But slower also meant safer, and we got back about 12:30 AM on Sunday.  I think a nap is in order this afternoon.

Some photos from the trip. 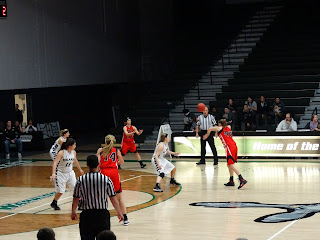 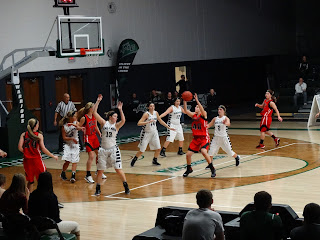 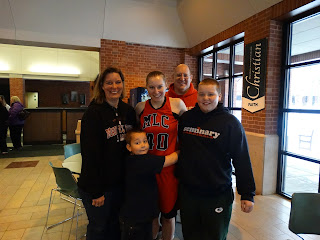 Posted by Pastor Thomas E Schroeder at 6:49 AM

Email ThisBlogThis!Share to TwitterShare to FacebookShare to Pinterest
Labels: basketball, Martin Luther College, The kids, Traveling with the Schroeders