This was preached for chapel at Michigan Lutheran Seminary in Saginaw, Michigan. 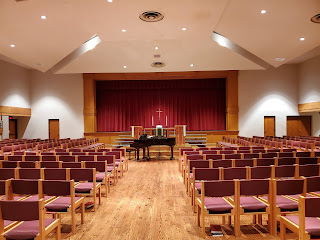 When Ezekiel was serving as God's prophet, it was not a good time to be in Jerusalem.  It just so happened that Ezekiel was not even in Jerusalem.  He had already been taken into captivity and was living in Babylon.  The Lord, however, gave Ezekiel a vision of what was taking place in Jerusalem.  The Lord showed Ezekiel the elders and the women and the priests of Israel engaging in blatant idolatry right in God's temple.  The Lord, however, is a jealous God who does not share the stage with any other so-called gods.  This had gone on long enough, so the glory of the Lord was leaving the temple.  God was forsaking the people.  Judgment was coming.

It was not a good time to be in Jerusalem.  True worship had practically disappeared.  God, however, had preserved a few people who remained faithful to him.  But what were they to do?  Where could they go to find comfort, peace, and the true words of God?  God's faithful people could not find solace in the temple.  It had been defiled.  The city was filled with false prophets who preached feel-good messages.  Jeremiah was there, but he was vilified for his preaching.  The faithful were grieved, and they felt very much alone.

Life in God's church was not easy.  The fight to remain faithful was getting harder.  But God had not forgotten his people.  God preserved the penitent.  The judgment coming to Jerusalem would be brutal slaughter, but the Lord showed Ezekiel what he would do for the faithful.  “He called to the man clothed in linen, who had the writing case at his waist.  And the Lord said to him, 'Pass through the city, through Jerusalem, and put a mark on the foreheads of the men who sigh and groan over all the abominations that are committed in it.'  And to the others he said in my hearing, 'Pass through the city after him, and strike.  Your eye shall not spare, and you shall show no pity.  Kill old men outright, young men and maidens, little children and women, but touch no one on whom is the mark.  And begin at my sanctuary'” (Ezekiel 9:3-6).

God preserves the penitent.  The Lord knew who was grieved that so many had abandoned the truth, dismissed the faith, and rejected the Lord.  Therefore, he marked them so that they would be spared.  The mark was actually a Hebrew letter.  The instructions were literally to “tav them with a tav.”  An ancient Hebrew tav looked like a cross.  Therefore, it was a cross which marked God's people so that they were spared.

In fact, the cross is what spares all of God's people.  Those who were marked were still sinners.  They had not proven themselves superior to anyone.  But God had put faith in their hearts which trusted his promises, which looked for a Savior who would take their sins away, and which did not delight in evil.  Those who were grieved over sin and evil—whether the evils that were going on in the temple or the sins that were going on in their lives—were marked with a cross.  The Savior they longed for would carry their sins to the cross.  Their iniquities would be laid on him, and he would suffer for their sins and die for their guilt.  The punishment that they had earned would be received by Jesus, and so they would be spared.

God preserves the penitent.  It did not mean that their lives would be easy.  It was still not a good time to be in Jerusalem.  The armies of Babylon would still come in judgment upon Jerusalem.  Even among the penitent, some would be killed with the sword.  Some would face starvation as food and supplies ran out.  Some would die by disease.  But none of them would perish.  They would be delivered to God's heavenly kingdom and have eternal life in his glorious presence, forever free from evils, from sin, and from all struggles.  The point is not to die comfortably.  Everyone is going to die.  The point is to die in the faith.  Those who die in the faith will not perish but have eternal life.

God preserves the penitent—whether you are grieved by the evils in the world or the sins in your life.  The Lord has marked you with a cross.  When you were baptized, you were marked with a cross on the head and the heart.  You were washed and cleansed by Christ who has taken your sins from you.  He has suffered what you deserve.  He has set you apart from death and damnation.  He has set you apart for his glory—that is, for good works in this life and for everlasting life in his presence.

No matter what you may suffer, you never lose God's favor, God's promises, and God's salvation.  The Lord has worked faith in you and set you apart for everlasting life. You will be forever free from evils, sins, and struggles—whether you die from COVID, from violence, or peacefully in your bed at age 95.  Because the point is not that you die comfortably, but to die in the faith.  If you remain in Christ, you will never perish—for you have been marked by a tav, a cross.  God has put his name on you.  And God preserves the penitent.  If you need a daily reminder that you are his, you can do as Martin Luther urged in his Small Catechism: When you rise and when you go to bed, bless yourself with the sign of the holy cross and say, “In the name of the Father and of the Son + and of the Holy Spirit.”  This reminds you of you who are and whose you are.

God preserves the penitent.  They shall never perish.  And through his word and sacraments, God will strengthen and keep you in the true faith unto life everlasting.

Posted by Pastor Thomas E Schroeder at 11:58 AM