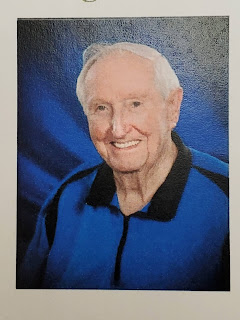 BEHOLD!  IT WILL ALL BE NEW.

Paul Sullivan is not the man he once was.  He was born into this world on January 22, 1938.  From the moment he drew his first breath, he was on a journey which would end with his final breath.  His parents knew that.  So, they had him baptized into Jesus Christ.  By means of that baptism, the Triune God made him new.  The heavenly Father declared Paul to be a child of God.  The Lord Jesus cleansed him of all sin and clothed him in garments of salvation.  The Holy Spirit kept him in the true faith as he continued to hear God's word and to partake in Holy Communion.  The Triune God made him a new creation—one who was destined to live forever.  Behold!  It was all new.

I am sure that you all have fond memories of Paul—whether as friend, father, or grandfather.  I never got to meet him.  I had hoped to.  He was in a nursing home facility and just as I was about to go and serve him with God's word, the COVID shutdown hit.  I was told that he was suffering the effects of dementia, so my prayer was that the simple message of Jesus would have resonated with him.  Even if he did not know me, he knew Jesus.  More importantly, Jesus knew him.  But Paul was not the man he once was.  Age and dementia will do that.  Even if he was shadow of his former self, God's promises and God's mercies did not change.  The Lord was faithful to him.  Paul's body and mind may have failed him, but God did not.

But this is not the end of his story.  Paul Sullivan was made a new creation at his baptism.  He was marked as a child of God.  He was given promises, and God is faithful to those promises.  St. John gave us a glimpse of the promises yet to be fulfilled.  Behold!  It will all be new.  St. John saw a new heaven and a new earth—a new home which will not be marred by hardships, by heartaches, or by any difficulties.  This is what St. John recorded: I heard a loud voice from the throne saying, “Behold, the dwelling place of God is with man.  He will dwell with them, and they will be his people, and God himself will be with them as their God.” (Revelation 21:3)

Behold!  It will all be new.  Paul's dwelling is no longer among sinful people in a corrupt world.  In heaven, the saints of God are gathered together, and God himself is there with them.  Although God is with us and is our God now, we do not see him except by faith.  As God's word is preached, Jesus is with us.  His body and blood are distributed underneath bread and wine in communion.  The Holy Spirit dwells in God's people at all times.  We believe he is with us because he says so.  But when Jesus comes to make all things new, we will not live by faith.  We will see our Lord.  We will be with our Immanuel, and he will be with us.

One of the bitter parts of death is losing one who is so dear to you.  When you lose a parent, you lose a part of your home.  You who are Paul's & Barbara's children are grown and have established your own homes.  You have your own jobs, families, and responsibilities.  But there is something comforting about coming back to your parents.  You may be frustrated at your job.  People may say nasty things about you.  You may be stressed out with your obligations.  You may even be at your wits' end with life.  But when you come to be with your parents, you are welcomed by people who love you without strings attached.  You do not have to pretend to be nice to them, and you know that they are not pretending to love you.  Your world may be a disaster, but your parents' home is still a refuge.

Jesus Christ has provided an even greater refuge.  “Behold, the dwelling place of God is with man.  He will dwell with them, and they will be his people, and God himself will be with them as their God.  He will wipe away every tear from their eyes, and death shall be no more, neither shall there be mourning, nor crying, nor pain anymore, for the former things have passed away.” (Revelation 21:3)  The God who became man to redeem mankind has brought Paul to dwell with him.  Jesus—who suffered for our sins to take away our sins, he who died under God's curse to deliver us from that curse, he who conquered death in order to be our refuge in death—has brought Paul to himself in heaven.  Jesus, Immanuel, is God with us; and he is Paul's Immanuel for all eternity.  He has brought Paul's soul to this new home—the perfect dwelling in God's holy presence.

Paul is not the man he once was.  Now, Paul no longer knows pain, frustration, or what it is to shed tears.  He sings with angels and archangels and all the company of heaven.  The Lord who saved him, who blessed him, who preserved him in the faith, and who loves him without strings attached, remains a refuge in death.  He loves us without strings attached.  The Lord Jesus promised these things to Paul, and now he has granted them.  Behold!  It is all new.

But there is still more.  Today, the remains of Paul Sullivan are here.  It is not the body he once had; for it has aged, grown weak, suffered badly in health, and has finally given out.  But the Lord has plans for this body.  Jesus announced them to St. John: He who was seated on the throne said, “Behold, I am making all things new.”  Also he said, “Write this down, for these words are trustworthy and true.” (Revelation 21:5)

Behold!  It will all be new.  Death has not had the last word.  Jesus overcame death.  He has purchased and won Paul from death.  Death does not own Paul Sullivan; Jesus does.  Therefore, on the Last Day, Jesus will raise these ashes up, and behold!  It will all be new.  This body which has succumbed to death will be raised up.  It will be incorruptible—which means that all effects of age and dementia and any sickness will be forever gone.  It will be imperishable—which means he will never know frailty, weakness, or death.  It will be holy—which means he will be perfected and live in God's holy presence forevermore.  Behold!  It will all be new, and it will forever be new.  These blessings are not just for your father and your mother.  Jesus has won them for you, too.  He speaks to you in his word to keep you faithful to him.  He summons you to his altar to partake in the heavenly feast in which he strengthens and keeps you in the true faith unto life everlasting.  If you yearn for the Lord's salvation—a blessing which your parents would yearn for you to have—then flee to Jesus.  He alone is our Savior, our refuge, and our comfort even in the face of death.

Paul Sullivan will not be the man he once was.  He will be risen.  He will be glorified.  He will be without sin, without pain, without sorrow, without death, and without end.  And just as he was the Lord's redeemed throughout his life, so he will be for all eternity.  Jesus is his Immanuel.  Jesus makes him a partaker of his glory forevermore.  And that will never get old.