A Pastoral Concern -- regarding the election 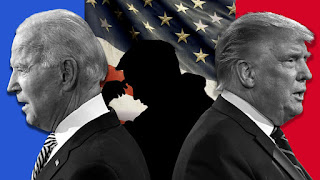 As we head into the more heated part of the election season, only about a month away from the date for US elections, I offer my counsel.  It is the same as it ever was and ever will be: "Do not trust in human helpers, in a mortal man who cannot save you.  His spirit departs.  He returns to the ground he came from.  On that day, his plans have perished." (Psalm 146:3-4)

While the election of our president, congressional representatives, and other offices is important and we rightly give prayerful consideration for whomever we cast our vote, we also ought to recognize that Jesus lives and reigns over all things.  When we pray, "Thy will be done on earth as it is in heaven," we mean our Lord's will.  Martin Luther, in his explanation of the 3rd Petition of the Lord's Prayer, wrote: "God's good and gracious will is certainly done without our prayer, but we pray in this petition that it may be done among us also."

Will the politician you vote for do the will of God?  Who knows?  Will God work out all things for the good of his people?  Yes.  He promises exactly that (Romans 8:28).  That will happen either in conjunction with an elected official or despite him.  It will happen as the policies enacted by our government benefit Christians or put a heavier cross on them.  We don't know what an elected official will finally do; we do know what our God will do.  Therefore, we are right to trust in that.  And if the world should burn and perish because of what an elected official chooses to do, the kingdom of God will still be secure and God's people in it will never perish.  They may die, but they will not perish.  For those who dwell in the kingdom of God have eternal life.  And so our prayer remains that, as God's will is done on earth, it will be done among us.  In other words, no matter what happens, we pray that we remain faithful as God's people.

Unless you don't care at all what happens in the election for our president, you are probably strongly devoted to one candidate or another.  You may even believe that the candidate you do not support is evil and that those who support him are warped, if not evil themselves.  Such is the political climate of our country.  Those who support a different candidate are not just people we disagree with; they are our enemies.  This societal attitude affects us in the Church, too.  We look at each other in terms of "us" and "them."  And while we may lament that it is sad that such divisions exist, we usually assume that "they" are the ones with the problem.  That itself is a problem.

So, what does the pastor say about all this?  What will he say to people who disagree with him?  Here it is.

Are you supporting Biden or Trump?  I will tell you about Jesus.

Are you a staunch Republican or Democrat?  I will tell you about the kingdom of God.

Do you want to see the state turn Red or Blue?  I will talk about God who loves the world in this way--he gave his only begotten Son so that whoever believes in him will not perish but have eternal life.

Do you lean Left or Right?  I will tell you about the paths of righteousness where our Lord leads us for his name's sake.

Do you prefer socialized medicine to cover all people or do you prefer privatized health care?  I will tell you about the blood of Christ which purifies you of all sin and of heavenly glory where our bodies will be immortal and incorruptible.

"Do not trust in human helpers, in a mortal man who cannot save you.  His spirit departs.  He returns to the ground he came from.  On that day, his plans have perished." (Psalm 146:3-4)  If you put your trust in elected officials and in their plans, you will perish with them.  The Christian hope is focused elsewhere: "My help comes from the LORD, who made heaven and earth." (Psalm 121:2)

If you are putting your hope on "the right man" becoming president, then perhaps the Lord is doing you a favor having "the wrong guy" win.  This will force you to pray more and pay greater attention to God's promises.  That is, after all, the will of God being done among us.

The world and its glory is passing away.  The kingdom of God endures forever.  The plans of man will come to nothing.  The word of our God and his mercies endure forever.  This is the message and the focus of the Christian Church.  Whoever longs for a perfect and permanent kingdom will flee to the Church for the word which endures and for the sacraments which strengthen faith and give eternal life.  This is all that matters, no matter who wins what election.

Posted by Pastor Thomas E Schroeder at 9:45 AM