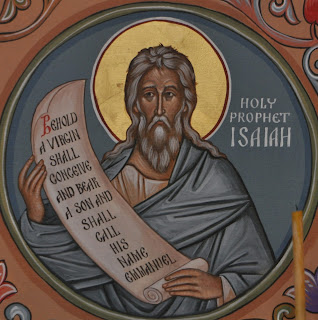 It should go without saying, but I will say it anyway: God does not think like you do.  While that is obvious, we usually assign fault to God for it.  Man may boast, “If I were God, I would put an end to cancer and COVID.  I would wipe out climate change, wildfires, and floods.  I would eliminate wars and riots and racism.”  Now, if there anything noble to be found in those sentiments, it is that people recognize that this is not the way things are supposed to be.  We do our best to find remedies for the evils we face, but we can't fix everything.

To assign blame to God for the evils that we see in this world suggests that God is not good and gracious.  It suggests that God is ignorant, negligent, or impotent.  Worse, the root of our thinking is that we deserve better from God.  If I suffer loss, sickness, or calamity, I may get angry with God because, in my way of thinking, I deserve better.

It is a common among sinners to think of ourselves more highly than we ought.  We do that with people, and we do it before God, too.  Should God treat you with more respect?  Does God owe you better?  Perhaps before we consider that, we should ponder this: What does God owe you?  What do you deserve, and why do you deserve it?

Do you respect to people who don't do good?  No.  So, why should God?  Do you think others deserve a reward when they do evil?  No.  So, why would God owe us better treatment when we sin?  Just as God is not stingy with his blessings for those who are righteous, neither is he stingy with his wrath for those who are not.  We have earned his wrath, just as we confess it: “I deserve your punishment both now and in eternity.”  If you do not believe this is true, that your condition is really that bad, then you believe that God is a liar and his grace means nothing to you.

But if you do believe it, then hear the Lord's summons: “Seek the LORD while he may be found; call upon him while he is near; let the wicked forsake his way, and the unrighteous man his thoughts; let him return to the LORD, that he may have compassion on him, and to our God, for he will abundantly pardon.” (Isaiah 55:6-7)  God reveals higher thoughts and better ways.  He is not like we are.  The Lord God extends grace to sinners and gives us much better than we deserve.  He is not content to let sinners go their own way and perish in ignorance or unbelief.  He summons all people to himself, because he is the only one who can pardon sinners, and he is the only one whose compassion actually benefits the wicked.

You might find a lot of people who claim to have compassion on the wicked.  Man's thoughts are to refuse to call anything or anyone wicked.  Man's ways are to encourage the wicked in what they do.  This is called compassion, because then the wicked don't feel bad.  But man's thoughts and ways are foolish.  If you and I agree that certain behavior is no longer wicked, God does not concede to us.  His standards still stand.  Just the same, his judgments still stand.  Therefore, he urges, “Let the wicked forsake his way, and the unrighteous man his thoughts.” (Isaiah 55:6)

God reveals higher thoughts and better ways.  God has compassion upon sinners.  He wants to see no one damned, but all people abundantly pardoned.  Of course, the pardon is not free.  It is free to you, but not for the Lord.  He gave his only begotten Son to win your pardon for you.  The Lord gave his only begotten Son to be criticized, maligned, abused, and executed by the wicked.  He let sinful mankind have their way with him so that Jesus could rescue mankind from their sin.  Why would the Father allow his own Son to suffer what he did not deserve?  Why would God the Son willingly accept a cursed death and the torments of hell when he was innocent?  And why would the Lord bear such a cost on behalf of people who have defied and denied him?  Does this make any sense to you?  Of course not.  But God does not think like you do.  God does not act to seek his own good, but yours.  The holy one seeks the good of sinners.  God does all this for you, and he is not stingy with his grace.  God reveals higher thoughts and better ways.

For the sinner who knows he deserves condemnation, there is no sweeter news.  But some are embittered by this, failing to appreciate grace.  Consider the parable that Jesus told in the Gospel lesson.  The master continued to gather people into his service throughout the day.  When those who were hired at the beginning of the day saw others receive a denarius, they expected more.  They reasoned, “These last worked only one hour, and you have made them equal to us who have borne the burden of the day and the scorching heat. (Matthew 20:12)  We deserve better from the master because we did more.”  However, that is not grace.  That is a wage.  Shall we conclude that our reward from God is earned because we have received grace from infancy?  We might not begrudge those who are brought into God's kingdom later in life, but do we think that we have a greater claim on grace or deserve better from God?  Beware: The servants who argued that they deserved better were dismissed.  If they would not receive the master's grace, they had no part of the master's estate.

God reveals higher thoughts and better ways.  This is true in regard to how God grants salvation.  He has compassion on sinners so that we are not condemned.  He abundantly pardons, for he continues to cover our sins so that we are continually righteous and blameless before him.  Therefore, we get to live in continual comfort and confidence.  We get to go to bed each night assured that God is pleased with our works and delights to call us his people.  We can even laugh in the face of death, knowing that we will be raised up from the grave to receive eternal joys and everlasting glory.  All who believe in Jesus are promised such a denarius, and we will not be short-changed.

God reveals higher thoughts and better ways.  It is also true in regard to how God works in your day-to-day life.  Since God is eternally good, whatever he gives you is for your good.  King Solomon wrote: “In the day of prosperity be joyful, and in the day of adversity consider: God has made the one as well as the other...” (Ecclesiastes 7:14)  It is unlikely that you would face the day of adversity with a smile and say, “This is good.  God has sent it; therefore it must be good for me.”  But God reveals higher thoughts and better ways.  The only reason you would know and believe the day of adversity is good is because you know who God is and what God is like.  If you don't understand how the day of adversity is good, you do know that God is good.  And if God makes life hard, you know that somehow, some way, God is doing it for your good.

But the Lord's thoughts are higher and his ways are better.  Everything God does—whether you like it or not, whether it makes your life easier or harder—is done for your eternal good.  If Jesus willingly suffered sorrows, torment, and death so that you could be abundantly pardoned, will he not continually have compassion on you?  Will he not continually do all things for your salvation?  And of course, the answer is a heavenly, “Yes!”  He is not stingy with his grace.  While his thoughts are higher than yours, you can be sure that you are in his thoughts.  And while men will always desire their own ways, the Lord has revealed to you a better way.  It is Jesus Christ, and it ends in glory with him.

Posted by Pastor Thomas E Schroeder at 11:48 AM