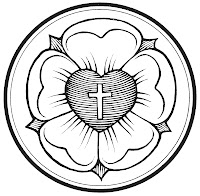 
But I am not ashamed, for I know whom I have believed, and I am convinced that he is able to guard until that Day what has been entrusted to me.  Follow the pattern of the sound words that you have heard from me, in the faith and love that are in Christ Jesus.  By the Holy Spirit who dwells within us, guard the good deposit entrusted to you.

He was an outlaw, and he was imprisoned.
He would not confess that Caesar is Lord, because it was not true.  The previous Caesar had died.  The current one would too.  They were not Lord.  Jesus had conquered death, and therefore, he was Lord.  He lives and reigns; he IS Lord.
They hated him, even though he preached God is love.
They would have no mercy on him, even though he proclaimed forgiveness.
They wanted him dead, even though he declared eternal life through Jesus Christ.
was despised and reviled and slandered – just like the Savior he proclaimed.  But he would not be put to shame no matter what.  They would try to destroy his reputation, his freedom, and his life.  But they could not change God’s verdict upon him.  He would not be put to shame, and he would not lose what God had given him.
For the Lord held him in his hand.
The Lord had deposited his grace and salvation and Holy Spirit in him.
Though he was in enemy’s hands, even more he was in the Lord’s hands.  So no matter what they would do to him, they could not take away his salvation.  They could not overcome the word of the Lord, the forgiveness of sins, the resurrection to eternal life, and the Lord’s own word about – that he was a saint.
And so are you.  Do not be ashamed of the confession you make.  Do not be ashamed of the truth you have been given.  Do not be ashamed of the One who saves you.  Let the world despise you; they cannot overrule your Savior.
The word of the Lord stands.  You remain in his care.  He has deposited in you his Holy Spirit.  The Lord dwells within you, and they cannot put him to death.  The Lord has marked you as his own, and they cannot erase God’s memory.
You will not be put to shame.  The Lord will guard and keep you, for you are his.  He is yours.  And the Lord does not forsake or forget those who are his own.  The Lord will guard and keep you.


In the name of the Father and of the Son + and of the Holy Spirit.  Amen.
Posted by Pastor Thomas E Schroeder at 8:47 AM