It was certainly mixed results this past week.

The MLS JV traveled to Ithaca.  MLS put their undefeated season on the line against a regularly tough opponent.  MLS put together a strong game, including some good plays that were called back due to penalties.  The MLS fans were not convinced on all the penalties that were called.  Nonetheless, MLS came away victorious with a 30-0 score.  One picture is below. 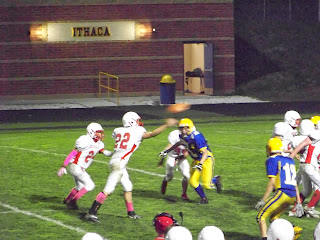 Friday night, Ithaca came into MLS putting on the line their 48-game win streak.  A win on Friday would give Ithaca the longest currently win streak in the nation.  MLS would have to play a perfect game to win.  Giving up 5 turnovers did not help.  Ithaca came away with a 42-6 win.  On the last drive of the game in which MLS put up their TD with the clock running out, Nathanael had two beautiful catches on the side line.  Unfortunately for me, I was standing on the sidelines and got to watch the backs of the MLS football players instead of the catches.  So, sadly, no photos of those.  But here is at least one from the game. 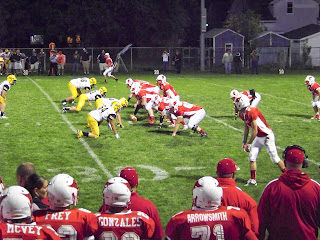