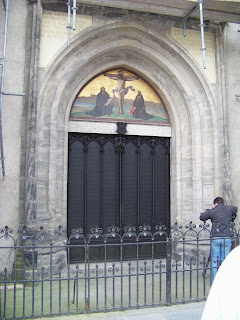 Today marks the date when Martin Luther posted his 95 Theses to the doors of the Castle Church in Wittenberg, questioning that people are forgiven through the sale of indulgences.  He sought to debate whether such sales were based on Scripture.  In truth, the 95 Theses were not terribly Lutheran.  Luther was fairly conservative in his criticism of indulgences.

But these Theses mark the beginning of the Reformation because Luther was bold enough to raise a question.  While Luther never did get his debate among the leaders of the church, there were many who also began to question where Truth was founded.  Was it founded by a Church Council passing resolutions?  Was it found in the Pope who claimed the sole right to interpret the Scriptures, meaning that the entire world must look to the Pope for truth and salvation?  (Theological faculties of various universities also claimed that right.)  Or was God capable of speaking for himself in Scripture?

There were a number of sources which claimed to have the right to interpret Scripture, denying that the Bible could speak for itself.  Someone always had to interpret what it "really" means.  Luther found this to be intolerable.  It had led to rites and ceremonies which turned people away from Jesus.  It left man in a perpetual state of doubt, especially since those who claimed to be the interpreters of Scripture often contradicted each other.

Luther recognized that, if we are to know divine truth, He who is divine must tell us that truth.  And therefore, Luther developed his motto of sola Scriptura, by Scripture alone.

The Scriptures can be mishandled, badly quoted, or mangled in the hands of man, but the Scriptures cannot be changed.  God has spoken for himself.  Man can know--with certainty!--exactly what God has to say, what God thinks, what God does, and what God wills.  Granted, there are areas in which God remains silent, choosing not to tell us his will or why he does what he does, but when it comes to right and wrong, forgiveness and cursing, salvation and condemnation, God has not left us in doubt.

Our forgiveness comes through Jesus Christ who has lived and died and risen for us.  The Law has been kept.  The curse has been lifted.  Death has been overcome and the gates of heaven have been opened.  The gifts Jesus won for us are delivered wherever his word is rightly preached and his sacraments are rightly administered.  There is no other way in which God gives these gifts.  Since God has not directed us to look for any other means of grace or salvation, we don't look for any other.  But we flee to where our Lord reveals and bestows his truth, his mercy, and his salvation.  Nothing is in doubt any longer, nor is it hidden, nor limited to a few, nor sold for cash.  In the Lutheran Reformation, God's truth is renewed.  God's mercy is poured out.  God's love is made evident.  And God's grace is free.

Lutherans, rejoice in what God has given you.  The best way to celebrate the Reformation and the best way to celebrate being Lutheran is to come to the font, to the altar, and to the pulpit to partake in God's saving truth.  This honors your Lord, and it saves you.  (And if it matters, Luther would smile, too.)
Posted by Pastor Thomas E Schroeder at 7:53 AM