Michigan Lutheran Seminary continues to have incredible success on both the JV and Varsity levels.  This past week, MLS played Merrill.  The JV hosted Merrill, and the Varsity went to face Merrill for their homecoming.  The game, however, was held at Saginaw Valley State University because Merrill is not able to use its field this season.

The JV was prepared for a nail-biter against a Merrill team which came in undefeated.  The first quarter ended scoreless, but MLS found their offense in the 2nd quarter, going into half time leading 35-0.  The final score was 42-0.

Below is a photo of Andrew throwing a 2 point conversion to classmate Zach Schaff (#18). 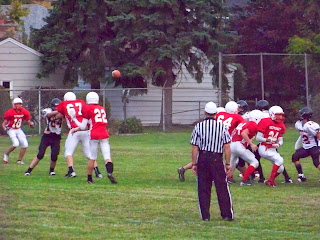 For the varsity contest, MLS and Merrill exchanged blows in the first half.  Merrill scored with about a minute left to take a 18-14 lead.  But MLS had a long return on the kickoff, and later put it in the end zone just before halftime giving MLS a 21-18 lead.

Then the skies opened and the rain poured down.  So did MLS and their offense.  The final score was 62-18. (that's not a typo.)

Below is a photo of Nathanael on an interception in the 4th quarter. 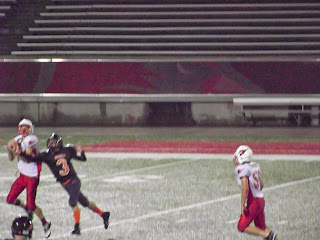