Football season has been chugging along, and so has every other part of life which is the reason I have fallen behind on the football coverage this fall.

On Sunday, October 9, Nathanael had a game vs. Heidelberg University of Tiffin, OH.  While the Concordia reserve squad started out strong against Heidelberg, Heidelberg got stronger in the 2nd half.  The result was a loss for the Cardinals of Concordia, 28-21.  Nathanael had some nice catches, though. 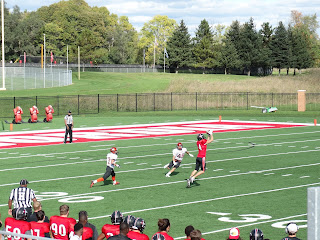 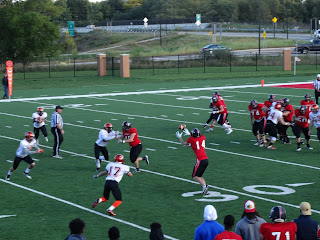 MLS JV at Pinconning (Thursday, October 13)
Since the game at Pinconning would have been a very long drive for us, and we likely would have shown up late, we did not make the trip.  Philip reported a 42-22 win for the Cardinals, though.  He also reported getting a sprained ankle--not during the game, but during the return trip from the locker room to the field at half time.  Add to that his concussion earlier this season during a pick-up game, and I think that Philip is safer on the field than off of it.

MLS Varsity vs. Pinconning (Friday, October 14)
We were told that this would be a hard-fought, nail-biter of a game.  Prognosticators from M-Live had predicted a win for the Pinconning Spartans, but the Cardinals came to play and they played hard.  The defense for MLS was stifling, limiting Pinconning to precious few yards all game.  In fact, going into the 4th quarter, MLS had not given up a first down, and going into the locker room at half time, they had held the Spartans to negative yardage.

In the meantime, MLS put up a lot of points.  The result was a 42-8 Cardinal win.

You can read M-Live articles about the game here, here, and here. 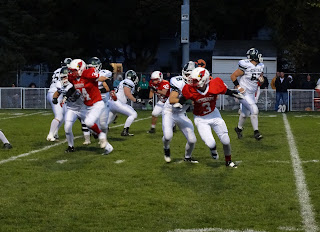 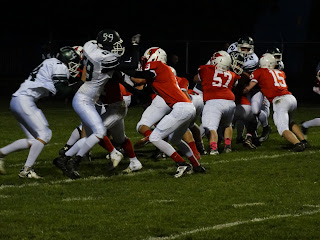 Concordia vs. St. Francis (Indiana) (Saturday, October 15)
This game was a pretty forgetable game against the #4 team in the country.  St. Francis dominated the game from beginning to end, ending up with a 45-6 win, and looking very much like a top ten team. 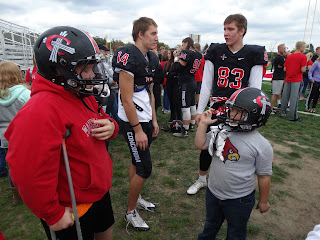