The Michigan Lutheran Seminary Cardinals faced the Yellowjackets of Ithaca last week.  The JV had a home game on Thursday, September 29, and the varsity traveled to a rain-soaked Ithaca stadium on Friday, September 30.  Ithaca has proven themselves to be a powerhouse program, and they produced victories at both contests.

Ithaca's JV team had some big players plowing the way for many TD runs.  They were very disciplined which resulted in a 48-7 victory.  With the MLS squad being predominantly freshmen, I hope that a full season of experience will get them better prepared and hungry for a better contest next year.  When I played high school ball, I was on the wrong end of many decisive victories, so I know the feeling the MLS JV had.  Keep your heads up, boys, you have many better years and games ahead of you!

The varsity game was a much tighter contest than the 17-6 final score would suggest.  Ithaca had problems mounting long drives all game, with the exception of one drive late in the game which resulted in a turnover deep in Cardinal territory.  All of Ithaca's points against MLS came on drives of 20 yards or shorter.  Two followed up turnovers, and the other followed a punt attempt where Casey Williams slipped on the soggy turf and MLS turned the ball over on downs somewhere near their own 10 yard line.  When you give a team a 10 yard field, it usually does not end well for you.  Despite all of that, MLS contained Ithaca to 17 points and shut them out in the 2nd half.

Caleb Heyn had a fantastic game running the ball, including a 70 yard (give or take) run on which he was tripped up one yard short of a TD.  MLS did punch that one in later.  Caleb also had 2 catches.

There are precious few photos.  Since it was so rainy, I wanted to keep the camera dry.  I did sneak out a few, though. 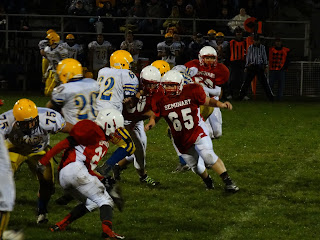 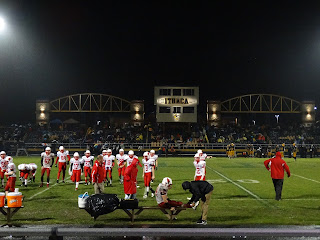 Concordia has been enjoying some good football this fall, putting up some solid games and one nail-biter last weekend that went into overtime.  Concordia pulled out the victory, 24-21.  Andrew had a TD catch (and a fantastic catch it was with a defender hanging all over him) earlier in the game.

For the first time in the history of the program (which has only been about 6 years now), Concordia is ranked in the top 25!  They enter the rankings at #23.  You can read about it and see the rankings at an article here.

In addition, the reserve players finally got a chance to play a game on Sunday, October 2.  Unfortunately, I was unable to attend.  Fortunately, Concordia won, 31-24 (I think).  Nathanael even scored the first TD of the game!  Go Cards! 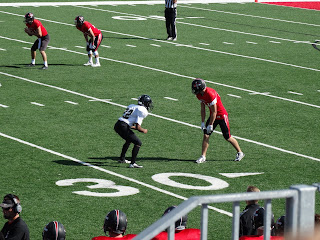 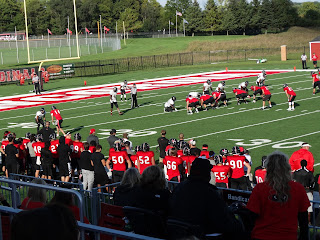 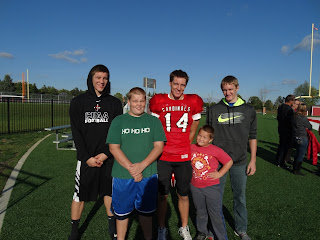 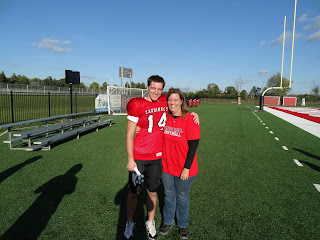