On Friday, October 28, the Michigan Lutheran Seminary Cardinals hosted the Vandals of Merrill for the first round of Michigan High School playoffs.  These two teams had been conference rivals for years until a reallignment this past year had them in different conferences.

The weather was good for a late October night, with temps in the 50's and fairly light winds.  MLS had high hopes for winning this game, but the reality was a very hard fought first half in which MLS continually came up short of the end zone.  MLS finally found the end zone on a play which could just as easily been a pick-six for Merrill.  A pass bounded off the hands of a Merrill defender and into the hands of Jordan Hayes who ran a good 40 yards for the only MLS TD of the first half.

The second half was more productive for both Merrill and MLS.  Both were able to move the ball well, but turnovers really hurt Merrill.  Cade Kestner hauled in four interceptions on the night, and MLS turned a few of those into TD drives.  Mark Burger caught a TD pass after getting hit hard in the end zone but still hung onto the ball.  Casey Williams and Caleb Heyn also had TD runs, completing the 27-0 MLS victory.

You can read an M-Live article about it here.

The video from WNEM Friday Night Lights can be seen here.  The MLS segment begins at the 2:30 mark.  The very first thing you will see is a player wearing a Schroeder #4 jersey.  That is Andrew's jersey from last year, but Andrew did not even make it to MLS for last night's game.  An underclassman was pulled up for the game.

The MSHAA forbids the posting of game photos, so here are a few post-game photos.  Game photos can be seen at my house. 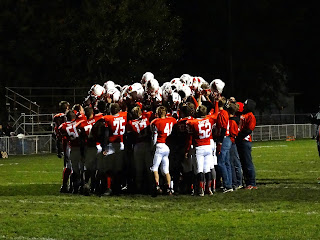 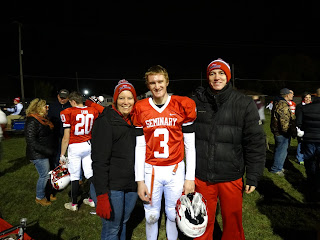 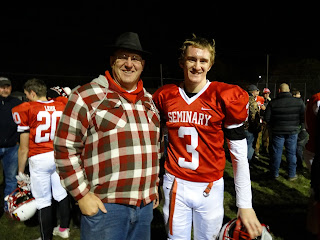 Posted by Pastor Thomas E Schroeder at 9:17 AM