The Cardinals, however, were playing pretty solid football in the first half, answering every New Lothrop score with one of their own.  The game was tight with MLS going into the locker room trailing only 23-22.  But the 2nd half was all New Lothrop, and the JV season ended with a disheartening defeat.

Despite getting a sprained ankle in the previous week's game, Philip managed to play in this game, and he got more playing time than we thought he'd get.  He also almost recovered a fumble.

The silver lining is that a large number of Freshmen played and got one year of experience.  They will return next year bigger and faster and eager to avenge losses.  Go Cards! 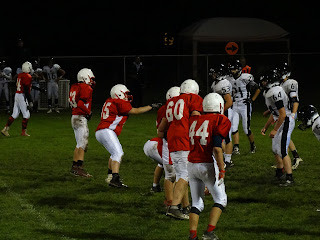 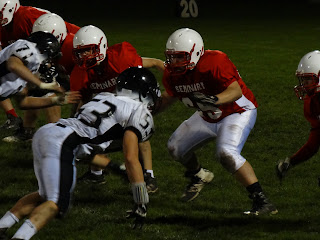 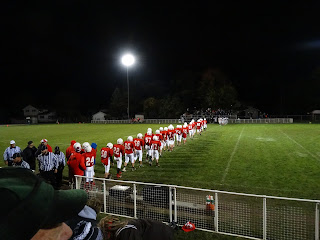 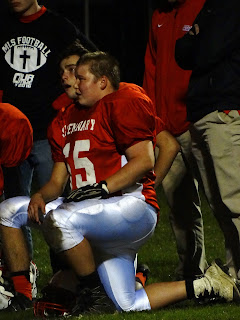 MLS at New Lothrop (Friday, October 21)
Once again, the MLS Cardinals were considered to be a clear underdog in this match up at New Lothrop.  That is understandable, with New Lothrop entering the evening with a 61-game winning streak in regular season football.  The last time MLS played here was in 2013, which was Nathanael's senior year for a play-off contest which New Lothrop won handily, 35-0.

It was looking like more of the same after New Lothrop took their first drive right down the field for a quick 7-0 lead.  But whatever adjustments MLS made took effect.  MLS stopped New Lothrop time again with solid defense and good tackling and a few interceptions.  As a result, New Lothrop was held out of the end zone until the 4th quarter.

In the meantime, MLS made plays to advance the chains.  Casey Williams also faked a punt and managined to slice his way through multiple defenders to find the end zone.  He also threw a TD pass on a halfback option, and Jordan Hayes made a spectacular catch in the end zone.

MLS entered the 4th quarter up, 24-7.  New Lothrop then found their rhythm on offense.  A touchdown drive with about 6 minutes left brought the score to 24-13.  After an MLS fumble, New Lothrop found the end zone again after another short drive, making the score 24-20 with just under 2 minutes left.  MLS got the ball after an unsuccessful onside kick attempt.  Add 15 yards to that because of a late hite, and MLS had the ball just past mid field.  A few run plays had New Lothrop burn their final time outs.  MLS opted to go for the first down so they could run out the clock, but the pass went incomplete, stopping the clock.  A punt later, and New Lothrop had the ball with about 1:30 left.  They made their way toward the end zone.  The final play of the game came from the 6 yard line, where the QB fumbled the ball forward into the end zone.

Both sides waited for the official ruling.  Whichever team had recoverd won the game (although I am nto sure what the high school rule is about fumbling the ball forward -- do they get the extra yards?  Because they did earlier on that drive, too).  Anyway, MLS recovered the ball and sealed the 24-20 victory.  They also sealed home field for the first round of the playoffs.  Way to go, Cardinals!

An M-Live article recapping the game can be found here.
The highlights from MLS at New Lothrop were featured on Friday Night Lights from WNEM, Channel 5 from Saginaw.  MLS highlights are up first. 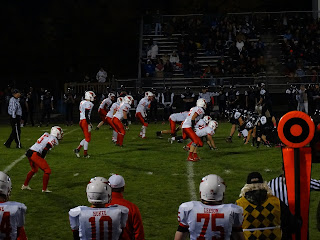 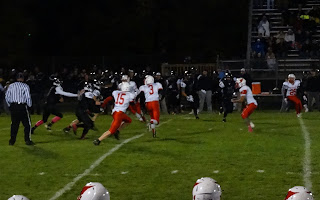 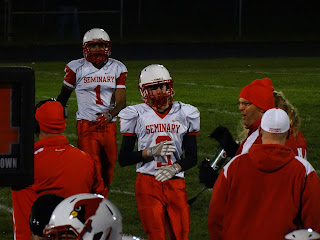 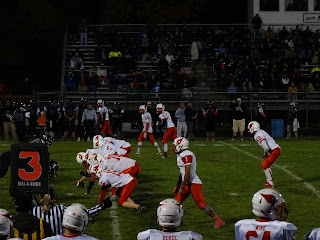 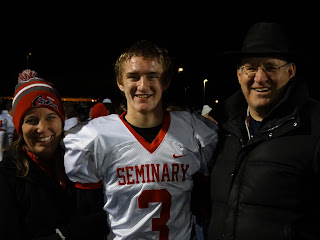