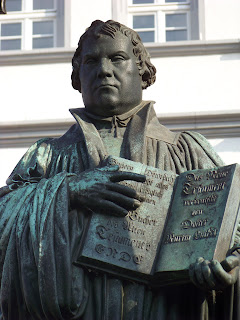 LET GOD BE GOD: Let God be higher than you.
We all like to think that we have free will.  Americans especially like to claim it, with our zeal for our own personal rights and privileges.  In fact, Americans are finding it harder to think that we have privileges.  We insist on rights, as if nothing is a favor or a benefit.  We are entitled to everything that we have, want, say, and do.
But before God, we do not have free will.  Only God has free will--total freedom to do what he wants with no one to influence or thwart his plans.  We do not have this.  We are subject to the will of God no matter how much we think otherwise.
There is one sense in which it is true that we we have free will.  That is in regard to earthly things, or as Luther describes it, "what is below."  We are free to eat whatever we want for breakfast--cold cereal, scrambled eggs, fruit smoothie, or to skip breakfast altogether.  No one forces us to make our choice in this matter.  Likewise, we get to go where we choose when we leave the house.  We usually go to fulfill our obligations.  But if you chose to point the car to Florida's Gulf Coast and to drive there instead of to work, no one would stop you.  Perhaps the only thing that does is money and the consequences of failing to show up at your job.
In regard to spiritual matters, however--what Luther calls "what is above"--we do not have free will.  No matter how hard we try, we cannot keep God's Commandments.  We fall short.  Now, we may want to follow those Commandments, but that is because God has instilled in us that faith and that new will.  And since that new will comes from God making us a new creation, it is still not a free will.  God had to convert us, and God continues to work in us through his word to will and to act according to his good pleasure (Philippians 2:13).
Anyone who insist that he is working apart from God still does not have a free will.  He also has one who guides him in his rejection of God's influence.  Here, the man does the will of the devil who urges him on in his stubborn rebellion against God and his will.  This does not mean that the one guided by the devil does only what is criminal.  It means that all he wills and does he wills and does apart from God, and therefore he cannot please God no matter how much he believes he does.  You cannot reject the First Commandment and still please God.
So, in regard to worldly things, we have the freedom to handle the things that perish and fade.  But in regard to spiritual things, we have no free will at all.  We are guided either by God or the devil.  There is no middle ground on this.  We are either in the kingdom of God or we are not.  There is no "free space" in the middle.  Here is something from Luther on the use of the term "free will."


“We may still in good faith teach people to use it [note: the term “free-will”] to credit man with 'free-will' in respect, not of what is above him, but of what is below him.  That is to say, man should realise that in regard to his money and possessions he has a right to use them, to do or to leave undone, according to his own 'free-will'—though that very 'free-will' is overruled by the free-will of God alone, according to His own pleasure.  However, with regard to God, and in all that bears on salvation or damnation, he has no 'free-will', but is a captive, prisoner and bondslave, either to the will of God, or to the will of Satan.” (page 107)
Posted by Pastor Thomas E Schroeder at 11:50 AM