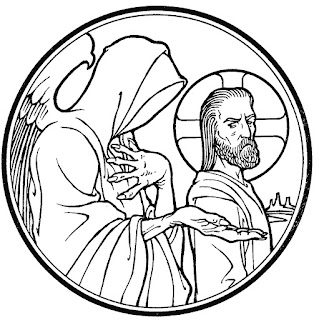 FOR US FIGHTS THE VALIANT ONE, ALONE.

In our Old Testament lesson on Ash Wednesday, the prophet Isaiah had us reflect on our own hearts.  When we take a good look at ourselves under the light of God’s Law, we see our sin.  We are not proud of it.  We do not even like it.  But we are sinners—both by nature and by practice.  We all are victims of Adam’s fall and subjects under Satan’s rule.

Isaiah also declared that one would come, fight for us, and rescue us.  “The Lord … saw that there was no man, and wondered that there was no one to intercede; then his own arm brought him salvation, and his righteousness upheld him.” (Isaiah 59:16)  The Lord himself comes to fight for us.  He comes to set us free from the grip of the devil, to release us from the tyranny of sin, and to destroy death itself.  For us fights the Valiant One, and just as Isaiah foretold it, he fights alone.

St. Mark gives us the shortest account of Jesus’ temptation in the wilderness, but he demonstrates how Jesus serves us as the second Adam.  The first Adam was created by God and placed in a lush garden.  The Garden of Eden was not only a place of splendid fruits and vegetables, it was also home to an abundance of animals.  The Lord “brought them to the man to see what he would call them.  And whatever the man called every living creature, that was its name.” (Genesis 2:19)  In Eden, the wild animals posed no threat.  All creation was in perfect harmony, and the hearts and minds of Adam and Eve were in perfect agreement with God’s will.

The first Adam, however, was targeted quickly by Satan.  Satan deceived Eve.  He convinced her that eating the one food which was off limits was her ticket to freedom.  Although Adam was with her, he did not counter Satan’s words or protect his bride.  With his bride, Adam believed the lie.  He ate the fruit.  As a result, he brought guilt and shame, death and decay into the world.  From Adam, every person on earth has descended.  Because of Adam, every person on earth is a sinner and will die.  All mankind fell in Adam’s fall.  One common sin infects us all.

But Christ, the second Adam came.  Jesus is the second perfect man to walk the earth.  At his baptism, Jesus was publicly marked as the Christ who would save mankind.  As the second Adam, Jesus would triumph where Adam failed.  So, immediately after his baptism, Jesus was tempted by the devil.  It was not a coincidence; it was by design.  St. Mark wrote, “The Spirit immediately drove him out into the wilderness.” (Mark 1:12)  It almost sounds like it was done harshly, but it was definitely done on purpose.  The Holy Spirit expelled Jesus into the wilderness to face our enemy, the devil, for us.  For us fights the Valiant One, alone.

The temptation of the second Adam was a little different from the first Adam.  Adam was in a lush garden; Jesus was in the wilderness.  Adam was among the wild animals which came to him and submitted to him; Jesus was among the wild animals which were undomesticated and dangerous.  Whereas Adam had his bride with him, and they could have encouraged one another to be faithful to God’s word, Jesus was sent out alone.  Whereas Adam had at his disposal abundant food, Jesus fasted.  Thus, for us fought the Valiant One, and he fought alone.

“He was in the wilderness forty days, being tempted by Satan.” (Mark 1:13)  Jesus’ battle in the wilderness lasted for almost six weeks.  And he faced it alone—not only single-handedly, but also in loneliness.  There was no one to offer encouragement, no one to pray with.  Jesus was cut off from loved ones, and the only voice that he heard was the seductive, deceptive words of the devil.  For us fought the Valiant One, alone.

The devil still likes to get us alone, or at least to make us feel like we are alone.  He knows that if he can cut us off from the family of believers, it is much easier to devour us.  There is a good reason our Lord has joined us together as a congregation.  We get to be encouragers of one another.  It is much easier to pray for someone you see than for one you don’t.  We can watch over each other—giving admonition of someone is drifting from the path of righteousness, giving consolation if someone is grieving, supplying aid if someone is in need, and rejoicing together with those who have been blessed.  To be separated from that—or worse, to separate yourself from that—is to risk being estranged from the body of Christ.  And if you are cut off from the body of Christ, you are not far from losing Christ himself.

The devil wants us separated, and he gives us reasons to do so.  None of them are good, but he convinces us they are.  When you are associating with members of any congregation, you are associating with sinners.  You may get your feelings hurt.  You may be insulted or snubbed.  You may be the subject of gossip or jealousy.  What does the devil do with this?  He convinces you that you are better off without these people.  He convinces you that patience and forgiveness are unreasonable.  The result is that you cut yourself off from word and sacrament, as if that teaches someone else a lesson.  The devil will tell you that this is a good thing, just as he convinced Adam that eating the fruit was a good thing.

It is not good for man to be alone.  It is not good for God’s people to live without each other.  The devil preys on you more intently when you do.  His temptations seem much more attractive when you are alone, because you are convinced you can get away with them.  This also means that you also bear your shame alone.  You become convinced that your sins are unique, that you are worse than everyone else, and that you don’t belong here.  But you are not alone.  The Apostle Paul reminds you: “No temptation has overtaken you that is not common to man” (1 Corinthians 10:13)  So you’ve sinned?  So has everyone else.  What grieves you probably grieves other people too.  The devil convinces you that it is better to hide your shame and suffer your guilt alone than to confess it.  Is it really?

The devil is a cruel and relentless enemy.  He seeks to devour you.  If he drives you to despair, he will not be merciful to you.  The Lord, however, is most merciful.  He does not leave you as prey or property of the devil.  For us fights the Valiant One, and he fights alone for us.  St. Mark kept the details of the battle brief.  “The Spirit immediately drove him out into the wilderness.  And he was in the wilderness forty days, being tempted by Satan.  And he was with the wild animals, and the angels were ministering to him.” (Mark 1:12-13)  Jesus endured the devil’s temptation for forty days, and overcame.  The second Adam remained perfect and obedient.

For us fights the Valiant One, alone.  And in truth, he had to fight alone.  No one else could do what he has done for us.  The temptations Jesus faced were not limited to forty days in the wilderness.  The Bible reminds us that “in every respect [he] has been tempted as we are, yet without sin.” (Hebrews 4:15)  Just as the devil does not leave you alone, so also he did not leave Jesus alone.  But Jesus fought off all these temptations, keeping himself free from sin.  He did this so that he could offer himself up as a holy, unblemished sacrifice to deliver you from all your sin.  Therefore, Jesus overcame the devil in his life and through his death.

While the battle against the devil was evident in the wilderness, it was most intense in Gethsemane and at the cross.  The temptation Jesus, no doubt, continually faced was this: “Why would you suffer hell and torment for people who are going to keep on sinning?  For people who will perpetually fail you?  Even for people who will never care?”  It sounds like a valid question, doesn’t it?  We cut out of our lives people who sin against us.  We have our limits.  But the love of God has no bounds.  His mercy endures forever.  So, the second Adam went to the cross to rescue all of Adam’s children.

Jesus was taunted by people as he died.  They challenged his claims.  They mocked his identity.  They thought it was laughable that he could save others but not himself.  Jesus endured the taunting and the scorn alone.  He bore the sins of the world alone.  He alone was forsaken for you, for your sins, whether they are public or private, whether they were done in the heat of the moment, intentionally planned, or have become habits  He who overcame every temptation gave himself into death for us who have not.  By giving himself into death, Jesus overcame the devil once and for all.  For us fights the Valiant One, alone.

The devil thought by putting to death the second Adam, he would forever hold captive all of Adam’s children.  But death could not contain Jesus.  On the third day, he burst out of the grave.  He now lives to pardon all your sin.  He lives as victor over death.  He lives to crush every claim, every lie, and every plot of the devil.  He is your Valiant One who has fought to win you, and so now you are his.

And now, you are no longer alone.  Jesus sends his Holy Spirit to dwell in you.  The Holy Spirit keeps you connected to Jesus so that you are preserved in the faith.  When you find temptations seductive—and you will, you also find the Holy Spirit works with your spirit to recognize them as wicked and to renounce them.  When you fall into sin—and you will, you have the Holy Spirit who produces in you a heart repulsed and repentant over your sins.  And when the Holy Spirit stirs in you so that you confess your sin, you will discover that your God is not disappointed in you.  He does not harbor resentment against the penitent, and he does not regret the payment he made for you.  Rather, he applies forgiveness to you.  For, he fought the good fight to win you.  He says you are worth it.  And he is not willing to give you back to sin, death, and the devil.

To further aid you in your battles and struggles, the Lord has been pleased to unite you to fellow Christians.  These people who worship and serve with you know what it is to be tempted, to be deceived, and to fall.  They crave the same mercy you do, and they long for you to have the same comfort they do.  And so, we gather where our Valiant Savior continues to serve, strengthen, and save us.  Rather than leave us to fast in the wilderness and face our hardships alone, Jesus summons us to kneel side by side and feast on the body and blood which have ransomed us from our enemy and which preserve us from his grasp.  For us fights the Valiant One.  He alone has won the victory, but he gives it freely to all.