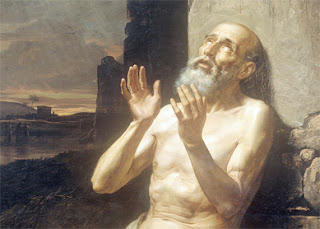 THE LORD BRINGS HEALING AND HOPE.

You’ll have to pardon Job if he seems a little cranky.  Job had suffered greatly, and he was at his wit’s end.  Job did not merely suffer from a sluggish economy or lose a 401k.  All his wealth was destroyed or stolen.  Then all Job’s children were tragically killed when a house collapsed on them.  Then Job’s reputation sunk with the loss of his possessions and prominence.  Even scoundrels gloated over him and mocked him.  Then, Job was diseased from head to toe with festering and infected wounds.  Job expected to die, and perhaps even wished he would.  To say that Job was miserable is an insult to the word miserable.  So, if Job is a little cranky, you might understand why.

You don’t have it as bad as Job.  You might have aches and pains.  You might have lost small fortunes.  You might have lost friendships or saw your reputation take a hit.  You have not had it as bad as Job.  But it still hurt, didn’t it?  You don’t have to reach the level of Job’s misery to know what misery is.  That’s not how things are supposed to be.  That’s why we feel sorry for people who are suffering.  That’s why Make-A-Wish charities and GoFundMe pages are set up for people.  We may not be able to solve their problems, but we can offer some support and relief.

Job compared his days to a soldier putting in his hard service, or to a hired hand who is sent out to labor in the brutal heat.  He longs for the relief of the shade or for reward for his service, but it is denied him.  “I am allotted months of emptiness, and nights of misery are apportioned to me.  When I lie down I say, ‘When shall I arise?’  But the night is long, and I am full of tossing till the dawn.” (Job 7:3-4)  Because of his suffering, Job was losing of hope.

Our reading is from the seventh chapter of Job.  By the end of the book, the Lord had restored to Job wealth, honor, and ten other children.  But Job was not at his happy ending.  Job was in the middle of sorrow, pain, and devastation.  He was crushed.  His life was a shambles.  It hurt, and he said so.  He saw no relief, and he said so.  Even in a sinful world, life was not supposed to get this bad.  But it did, so Job pleaded with the Lord, “Remember that my life is a breath; my eye will never again see good.” (Job 7:7)

Now, who is to blame for Job’s suffering?  If you are familiar with the book, you know that it was Satan who challenged Job’s faithfulness the Lord, claiming Job only served the Lord because his life was good.  If Job was put to suffering, Satan argued, Job would curse the Lord and renounce him.  With that, the Lord sent Satan out to do what he wanted.  So, again, who is responsible for Job’s suffering?  And by extension, who is responsible for yours?

It is easy to blame Satan for every bad thing and to credit God for every good thing.  But if God is good and God is all-powerful, then why should any bad thing ever happen?  Some have concluded that either God is not good, or God is not all-powerful.  But let’s consider this more closely.  When Satan went out from God, it was because God let Satan do what he wanted.  God also set limits on what Satan wanted.  So, God did not lose his power.  Rather, God used Satan for his own purposes.  Yes, Satan wants you to suffer.  It is not just for the sake of seeing you endure misery.  Satan wants to use misery to drive you away from the Lord.  He wants you to blame the Lord that this is a fallen world, that people get sick and die, that we lose loved ones, that we lose our coordination, memory, eyesight, or hairline.

Job cried out to the Lord, “Remember that my life is a breath; my eye will never again see good.” (Job 7:7)  Job recognized that his miserable situation might remain miserable for the rest of his life.  Job also recognized that this life is momentary.  There are no guarantees that we will go through it pain-free, stress-free, and care-free.  If you have lived long enough, you know that you won’t.

Job was suffering.  It seemed as though God had become Job’s enemy.  Job reckoned that the Lord was responsible for his misery.  That’s how it felt.  But faith does not rest on feelings; it rests on promises.  Job still believed that the Lord was his good and merciful Father in heaven.  Even if Job was convinced that he would never again see good in this world, he remained confident that he would see good in God’s eternal kingdom.  The world would remain full of wickedness, sorrow, grief, and pain.  But this remained true: The Lord brings healing and hope.

With any of the suffering you endure, Satan intends to make you angry and bitter.  He wants you to affix blame to God.  He wants to drive you to despair, to abandon your faith, and to be damned.  He does not care how miserable you are now, but he surely wants you to be miserable for all eternity.  That was the aim for subjecting Job to all his suffering.  But Satan does not do anything apart from God’s will.  God uses Satan for his own purposes.  So, yes, God uses the devil to subject you to sorrow, loss, grief, and pain.  But God’s intention is not to drive you to despair.  It is to drive you to call upon God for mercy.  God lays on you a cross to put to death every ounce of love for the world and for yourself.  It is a bitter death, no doubt.  But it is a necessary one.  For if we love this world, we will not long for the world to come.  If we love our ease, we will fight tooth and nail to preserve what our sinful nature craves.  God loves you too much to let that happen.  So, he allows and even sends suffering.  It may appear as though God becomes your enemy when he does this, but he is working for your eternal good.  He is still your good and merciful Father in heaven.  No matter what you might be enduring, know this: The Lord brings healing and hope.

This is why Jesus was sent into the world.  He shows us what the kingdom of God is like.  Our gospel lesson reveals this part of his kingdom: Jesus brings healing and hope to people who are afflicted by fever, disease, and even demon possession.  First, Jesus rebuked the fever of Simon Peter’s mother-in-law.  Then, “that evening at sundown they brought to him all who were sick or oppressed by demons.  And the whole city was gathered together at the door.  And he healed many who were sick with various diseases, and cast out many demons.” (Mark 1:32-34)  Our Lord Jesus Christ revealed that he brings a kingdom where sickness and disease will forever be driven out.

He also revealed that Satan and his demons can no longer torment or oppress people.  While physical demon possession seems to be pretty rare in our society, spiritual torment and oppression by the devil affect people continually.  Who of us has not been haunted by the sins of the past?  It does not matter if our sins are in the distant past of if we could chalk it up to being young and foolish.  When we are reminded of the pains we inflicted with callous words, with the harm we caused because we betrayed someone, with how much we regret heartlessly standing by and doing nothing to help others, that spiritual oppression and torment causes its own grief, pain, and misery.  We would do anything to have those shameful moments back, but we can’t.  We would give anything to erase the moment and the memory, but we can’t.  These are not the same scabs and sores that Job endured, but they still hurt.  And we are no less convinced that God would turn his back on us for our sins.  Or that he should.

But with the Lord, there is healing and hope.  Jesus delivers you from all the pain, grief, and sorrow from sin.  He doesn’t erase the past, he pardons you of it.  He removes the marks from your record.  Jesus is your advocate against the devil.  When he accuses you, redirect him to the one who speaks for you.  “Satan, are you accusing me of sin?  I’m sorry.  You are addressing the wrong person.  For, I belong to Jesus Christ.  He has taken up my cause and is my defense against every evil thing.  He has even taken my sins from me, so they are no longer mine.  He absorbed the punishment for my sins, so they have been dealt with already.  And the Savior who died to save me now lives and reigns over all things.  Since he lives, you can speak to him, devil, and see what he has to say about my sins.  For Jesus reigns, and all judgment has been entrusted to him.  His judgment is this: I have full and free pardon for all my sins.  So be gone, devil.  No matter how miserable you try to make me, my God remains faithful, and the blood of Jesus brings me healing and hope.”

Yes, the Lord brings healing and hope.  When you were baptized into the name of the Lord, he drove out the devil from you.  Now the Holy Spirit dwells in you.  He guides your heart and your mind, your mouth and your hands to do the good God desires of you.  He gives you a new life in God’s kingdom—lived now in humble obedience, and later the resurrection of a holy body to glorious joy.

While sin and the devil affect us in our spirit, they also do damage to our bodies.  Our Lord has not overlooked that.  When Jesus came, he did more than bring forgiveness to broken and contrite hearts.  He also cured and restored broken bodies.  This is why people from all over Galilee brought their sick to him.  Jesus put his hands upon them and healed them.  This, too, is the kingdom of God, for it is freedom from all evil.

The Lord brings healing and hope.  Thus, the Lord did not leave Job in misery forever.  Eventually, the Lord delivered him from his poverty and pitiable condition, not that God owed it to him.  Even if Job had died, he would not have perished.  He would have entered eternal glory, forever free from all these hardships.  So also, when you pray for relief, you know that whatever God grants you is ultimately for your eternal good.  If he lets Satan afflict you, he is only using the devil’s evil for your good.  It won’t feel like it, but faith does not rest on feelings.  Faith rests on the word of the Lord who saves his people.

The Lord brings healing and hope.  The very things we pray for—a life that is pain-free, stress-free, and care-free—these the Lord Jesus will give you without fail and without end.  Whoever hopes in the Lord will not be disappointed.  He will receive a glorious kingdom, complete healing, and joy beyond all we hope for.

Posted by Pastor Thomas E Schroeder at 11:40 AM