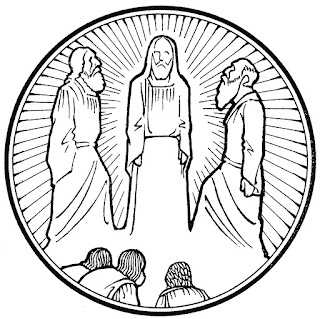 TO SEE THE GLORY, YOU MUST LISTEN.

We are on the threshold of Lent—a season which is somber and highlights our sinfulness.  But before we enter Lent, we pause for a moment to reflect on the glory of Jesus.  The glory of Jesus was seen only in glimpses throughout his ministry.  On the night Jesus was born, the glory of the Lord was not really seen in the manger.  The eyes which beheld the baby Jesus saw a Jewish baby.  It was only the message of the angel which revealed that this baby is the Christ and the Lord.  Jesus taught and acted as one with authority.  He commanded and the demons were driven out.  He touched and bodies were healed.  He even forgave the sins of men.  While the eyes saw the miraculous signs, those same eyes beheld a Jewish man.  Many never saw beyond that.  Many marveled.  Others were offended.  Even Jesus’ own disciples, after he silenced the winds and the waves on the Sea of Galilee, wondered, “Who is this?”  They caught the glimpse of Jesus’ glory, but seeing was not enough.  To really see his glory, they had to listen to his words.  It is the words which reveal who this really is and what he comes to do.

On Transfiguration Sunday, we see the glory of the Lord in Jesus.  Here, it is most vivid, most striking, most pronounced.  We see Jesus as true God, just as we sing at Christmas: “Veiled in flesh, the Godhead see, Hail the incarnate Deity” (Hark! The Herald Angels Sing, v 2).  But on the mountain, the veil was pulled back.  The disciples saw the Deity more than the incarnation.  “He was transfigured before them, and his clothes became radiant, intensely white, as no one on earth could bleach them.  And there appeared to them Elijah with Moses, and they were talking with Jesus.” (Mark 9:2-4)

The glory was obvious.  The Son of Man looked like the Son of God.  Even the saints of the past made an appearance.  Prophets who had foretold the Christ appeared with the Christ.  It certainly was worth gazing at and soaking in.  That’s why Peter suggested putting up three tabernacles: “one for you and one for Moses and one for Elijah.” (Mark 9:5)  This way, others could come up to the mountain.  They could see the glory, too.  But like the miracles, this was only to be a glimpse of Jesus’ glory.  To really see the glory, you must listen.

Peter, James, and John would have found much more comfort in listening than in gazing.  Yes, Moses and Elijah were there, but what were they doing?  “They were talking with Jesus.” (Mark 9:4)  Wouldn’t it have been wonderful if St. Mark had recorded what they were talking about as well as what it looked like?  While we don’t have those words recorded, the Holy Spirit has preserved the words of Moses and Elijah in the Old Testament.  We have plenty to ponder there.  In addition, God the Father redirected the attention of Peter, James, and John.  “A cloud overshadowed them, and a voice came out of the cloud, ‘This is my beloved Son; listen to him.’” (Mark 9:7)  To see the glory, you must listen.

Without a doubt, what Peter, James, and John saw was glorious.  They got a glimpse of the Church which lives in glory.  Our Lord is the God of the living.  Peter, James, and John got to see that the saints of the past are alive and well.  Moses and Elijah were not figments of their imagination.  Though believers may depart from life on earth, they continually live in the kingdom of God.  And so it is for your loved ones who die in the Christian faith.  Though their bodies have given out, their souls go to dwell in the Lord’s glory and communicate with him.  They live together with Moses, Elijah, and all the saints who have gone before us.

But the glory at Jesus’ transfiguration was only a glimpse.  His fuller glory was to come at Mt. Calvary.  When you look around the church, you notice that we have crosses and crucifixes on display.  I don’t think we have any rendition of the transfiguration of our Lord, except on the bulletin cover.  The reason we focus on what is gruesome is because of the word of the Lord.  To see the glory, you must listen.

There was no payment for sins on the mount of Transfiguration.  Satan was not crushed underfoot on that mountain.  Death was not overcome on that mountain.  Peter, James, and John found reasons to be amazed, but not salvation.  The scene on the mount of transfiguration was something to stare at in amazement; the scene on Mt. Calvary was something that would make you turn your head and gag.  But that is where God’s glory was truly seen; for that is where sins were paid for.  That is where death was being battled.  That is where Satan lost his grip on you.  To see that glory, you must listen.

Many people saw Jesus and the works he performed.  This is why they brought all their sick people to Jesus.  They sang their praises of Jesus, declaring, “He has done everything well.  He even makes the deaf hear and the mute speak!” (Mark 7:37)  Now, that was true, but it misses the point.  They came for bodily cures, but not for forgiveness of sins.  Seeing the miracles did not make people trust in Jesus as the Lamb of God who takes away the sin of the world.  Some said he was John the Baptist.  Others said he was Elijah or one of the prophets of old.  So much for simple observation.  To see the glory, you must listen.

God the Father tells us what to pay attention to when it comes to Jesus.  “A cloud overshadowed them, and a voice came out of the cloud, ‘This is my beloved Son; listen to him.’” (Mark 9:7)  The apostles had listened fairly well.  They all confessed to Jesus, “You are the Christ.” (Mark 8:29)  But then they failed to listen to everything Jesus had told them.  Jesus told them what his mission was and how they would truly see his glory.  “He began to teach them that the Son of Man must suffer many things and be rejected by the elders and the chief priests and the scribes and be killed, and after three days rise again.  And he said this plainly.” (Mark 8:31-32)  Peter did not remember this.  He preferred three tents so that Jesus, Moses, and Elijah could always be visited, so that everyone could bask in a moment of glory.

We always long for glory that we can see or feel.  We delight in our victories because others see our accomplishments, and it makes us feel good.  We delight in the benefits that result from earthly glory.  We get fame and fortune, popularity, pride, and power.  We also fall into the temptation of finding our value in such glory.  We feel that we are failures if we don’t have our moments of glory, or if we don’t have them often enough.  If you feel that your worth is connected to how the world sees you (or how you think the world sees you), you are being fed a line by the devil.  Worldly glory feels good for a moment, just as sins feel good for a moment.  In both cases, the feelings are addictive.  We crave the rush we get from the admiration we receive, just as we crave the thrill from the sins which gratify our base desires.  And in both cases—in our lust for glory and in our lust for sins—the good feelings are deceptive and fleeting.  If you crave it, if you feed it, and even if your moment of glory is well deserved, you will end up feeling hollow.  The glory that Peter, James, and John witnessed on the mountain was never going to be permanent—not for them.  Perfect and permanent glory does not exist on this earth.  It is always soiled, interrupted, or stolen.  Even if you are impressed by it, it will not last.  Just ask Tiglath-Pileser, Amenhotep, and Diocletian.  “Who?” you ask?  Oh, those were kings and emperors.  Aren’t you impressed?  No, because no one envies kings or kingdoms lying in dust.

Jesus delivers to you a greater glory.  He rescues you from the corrupted, deceptive glories of the earth and even from the dust of death.  If you want to see that glory, you must listen to him.  He tells you what he does to atone for your sins of loving the world and its glory.  It is shown to you by the bloody, shameful death he suffers for you.  He was assigned the guilt for all sins so that you are found innocent.  He was stripped of his garments so that you are clothed in his righteousness.  He was crowned with thorns so that you will be crowned with glory.  He was put to death so that you will have everlasting life.  As horrid as crucifixion looked, and as brutally as Jesus was mocked while he was enduring it, Jesus tells you that all of it is for the payment of your sins and for the deliverance out of death into a life of immortal glory.  This is the glory of the Lord—that he loves and saves sinners.  It does not look like it, but that is what is proclaimed.  To see the glory, you must listen.

It is also necessary to listen to him to know how you can be sure you have this glory.  If you believe your own story, you will try to convince yourself that you are destined for eternal life—either because you believe you are good enough or because you don’t want the alternative.  But you also know your sins, so you cannot trust your own goodness.  Your friends might tell you how wonderful you are, but as flattering as it is to have people glorify your name, their fondness of you won’t save you.  To see eternal glory, you must listen to Jesus and no one else.

Blessed be the God and Father of our Lord Jesus Christ!  According to his great mercy, he has caused us to be born again to a living hope through the resurrection of Jesus Christ from the dead, to an inheritance that is imperishable, undefiled, and unfading, kept in heaven for you. (1 Peter 1:3-4)  It is kept in heaven for you, but it is delivered here to you on earth.  To see this glory, listen to him.  Jesus promises, “Whoever believes and his baptized shall be saved.” (Mark 16:16)  He summons you to eat and drink his body and blood for the forgiveness of your sins.  He tells you that he is your refuge and strength—your refuge from sin and death, and your strength against deception and temptation.  Jesus tells you that you are children of God.  Granted, that is not a glory you can see and feel right now, but this is God’s declaration.  If you listen to him, you can be assured of your salvation.

Posted by Pastor Thomas E Schroeder at 11:58 AM