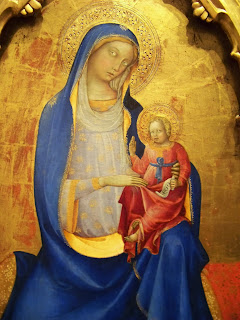 Below are two of the devotions that followed lessons from our Service of Lessons & Carols on Christmas Eve.

1st Lesson
Genesis 3:8-15
The Seed of the woman will crush the serpent’s head
Adam and Eve tried to hide their shame under fig leaves; it did not work.  Adam and Eve tried to hide in fear from having to face the Lord; it did not work.  Adam and Eve tried to dodge accountability by offering up excuses for their sinful choices and actions; it did not work.  It still does not.
You cannot talk yourself out of the fear of death.  You cannot ignore the guilt that festers in your conscience and accuses you relentlessly.  You cannot avoid accountability before the Lord.  You can pretend God does not matter.  You can pretend God is not real.  You can pretend your rejection of God's word means that God's word no longer applies to you.  You might even convince yourself that rejection of God and his word result in freedom and fun.  But these are the same kinds of lies that the devil sold to Adam and Eve.  He still lies.  We still believe him.
Adam and Eve were not free from God, from guilt, or from death.  God had them dead to rights.  Satan had them under his realm.  Adam and Eve were free only in one respect—they were free from God's blessings and love and mercy and eternal life.  They were promised better than that.  The devil lied.  He still does.
Even though Adam and Eve did not ask for it, God promised it—mercy for sinners, a solution for sin and death, a Savior.  The Savior would be the Seed of the Woman.  God refers to him as a specific person: “He.”  He will come from a woman—not the seed of a man, but of a woman.  He will come as one hated by the devil, for the devil knows he comes to destroy his work and put an end to his dominion.  He will come to crush the serpent's head.  He will come to pardon sin, to alleviate guilt, to set sinners free from fear, to cover our shame with his goodness, and to put an end to death.  He comes to give us something better than excuses; he comes to give us forgiveness for our sins.
But it will cost him.  “He shall bruise your head, and you shall bruise his heal.”  He will suffer and die in order to set us free.  But he will set us free—free to live under God's blessing, free to live without fear or guilt, free to know that God's favor rests upon us.  Now you live under a new realm, and this one does not end in death but in life.  This is what God had created us for, and this is what “He” redeems us for.  The serpent is crushed underfoot.  The Savior lives.  And you are free to live in peace, and to live forever.