This past Thursday, the Michigan Lutheran Seminary JV traveled to Birch Run for their final game of the year.  Going in, it was suggested that MLS was going to be handed a devastating, crushing defeat by a big and talented team.  Now, unless there was a flu epidemic wiping out the larger members of the Birch Run JV squad, they were not nearly as big as I thought they would be.  In fact, it is probably one of the smallest offensive lines we had faced all year.

I also think that the MLS freshmen have really learned quite a bit this year, and they have gotten more polished as the year has gone on.  That seemed to show itself this game, especially with the blocking.  MLS ended up winning the game 40-30.

Here are some photos below. 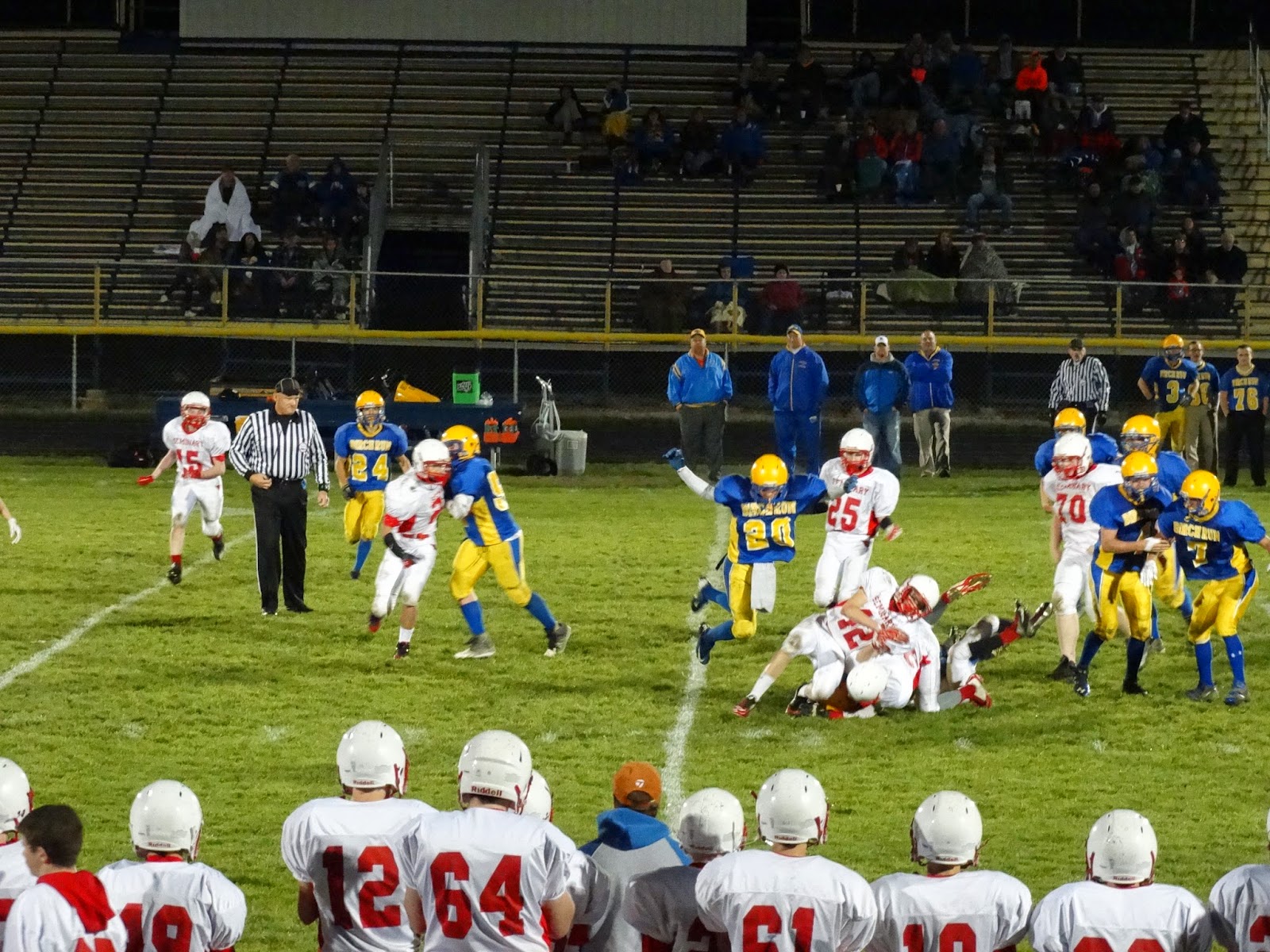 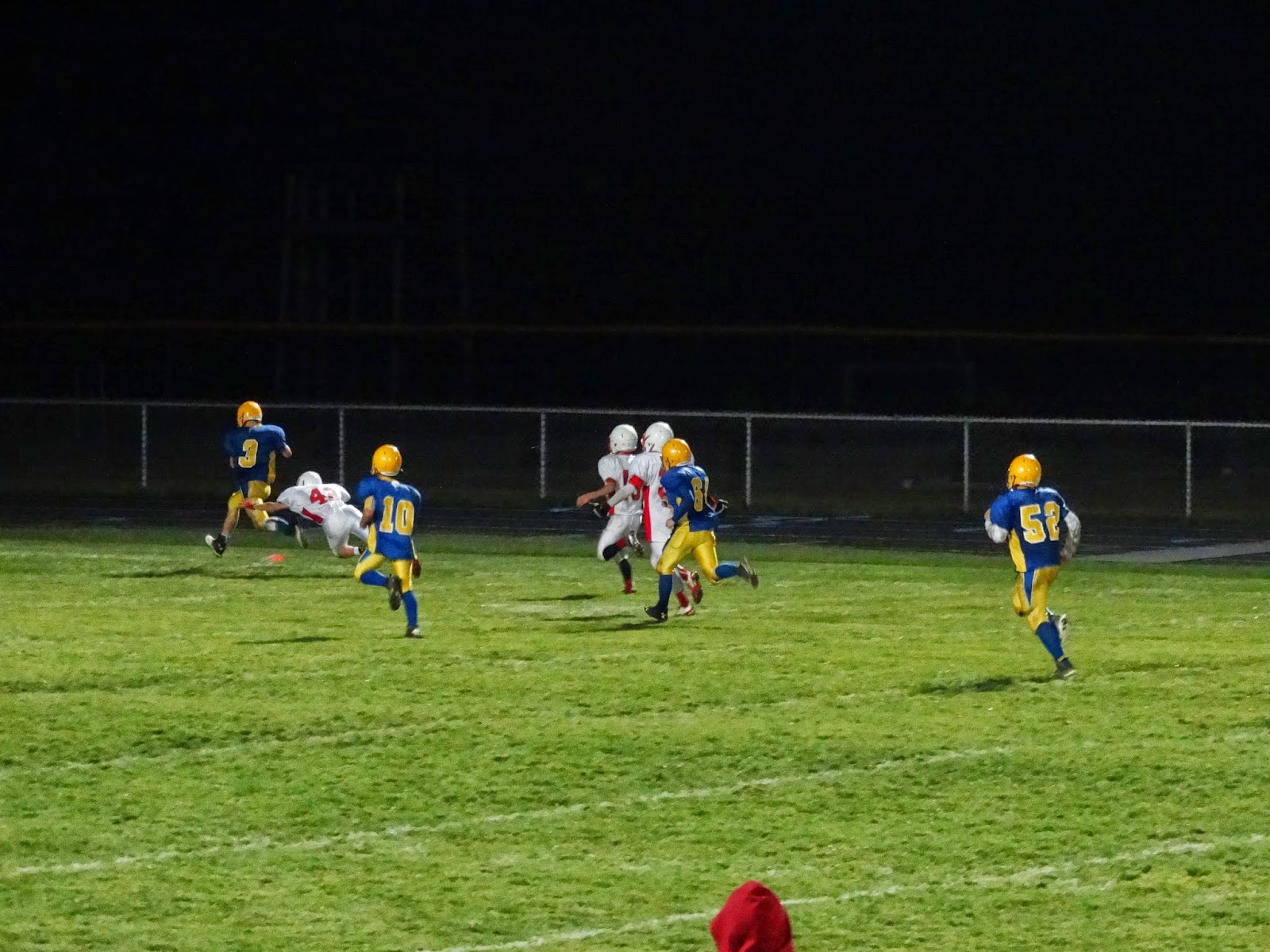 Caleb's diving attempt at the tackle came a little too late in a long Birch Run TD run. 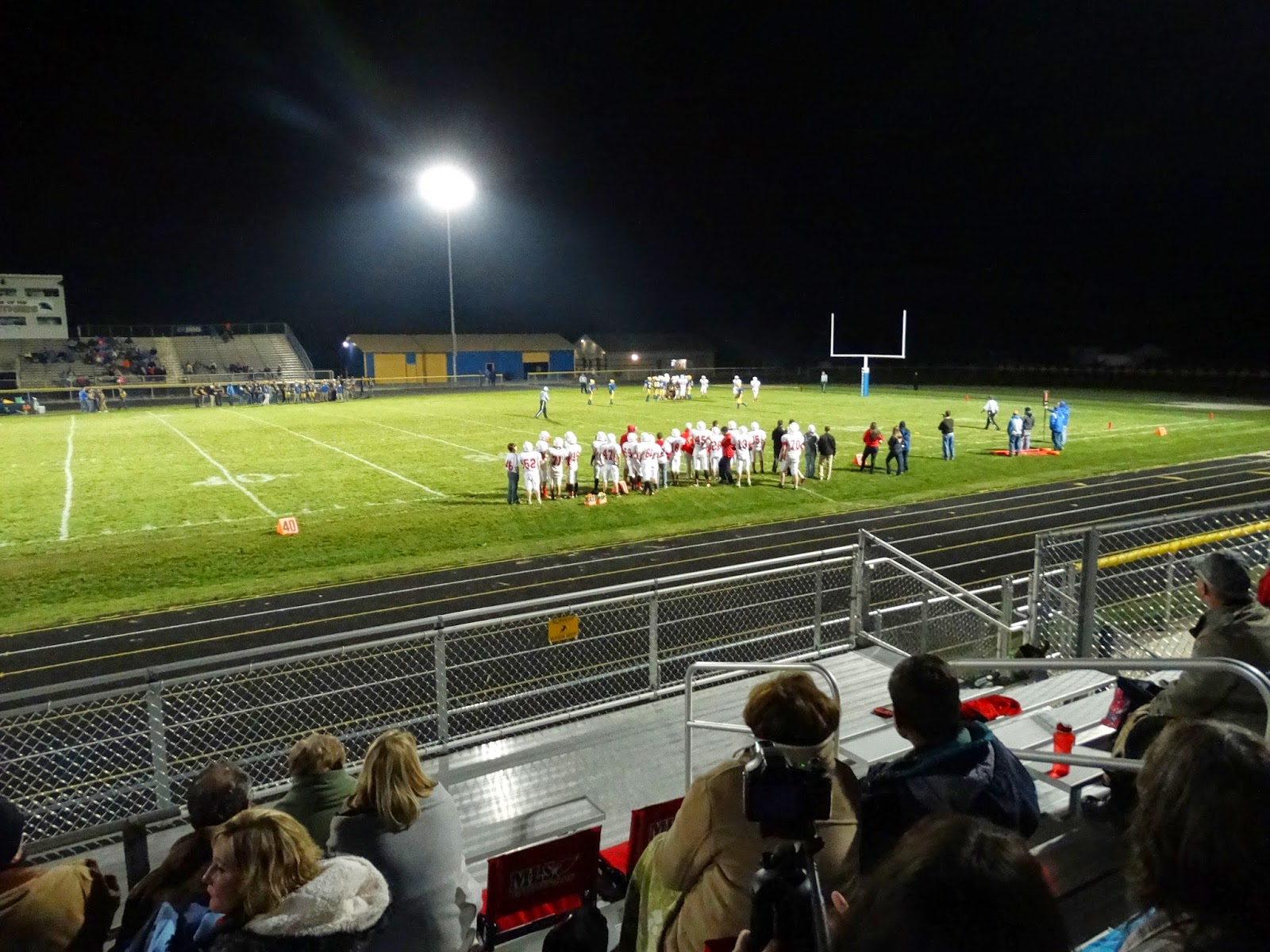 On Friday night, the MLS varsity hosted the Birch Run Panthers.  We had heard that Birch Run was big and talented and were destined to give us way more than we could handle.  As it turned out, we were barely able to handle ourselves with four turnovers and a blocked punt returned against us for a TD.  Nevertheless, MLS' defense was swarming around the ball again.  Though we gave up 171 total yards on the night, 71 came on one long play for a TD.  Otherwise, the defense was solid and hit hard.

Offense put up four TD's, with some big plays called back due to yellow flags (and we were pretty sure that some of them were actual penalties).  With MLS up 27-20 and about 1:50 to go in the game, MLS got the ball back after Birch Run turned it over on downs deep in their own territory.  This was time to run out the clock.  Instead, we fumbled on our very first play--never wanting to make anything easy on this night--and gave it right back to Birch Run.  Right after that, Birch Run was throwing a pass down field and Andrew jumped the route, leaped over their receiver, and made the interception to seal the game.  That may have been his favorite catch all season.

The final was MLS 27, Birch Run 20.  That makes MLS 8-1 on the season, and we will be hosting a playoff game next Friday.  The opponent will be announced on Sunday.  Here are some photos from Friday night. 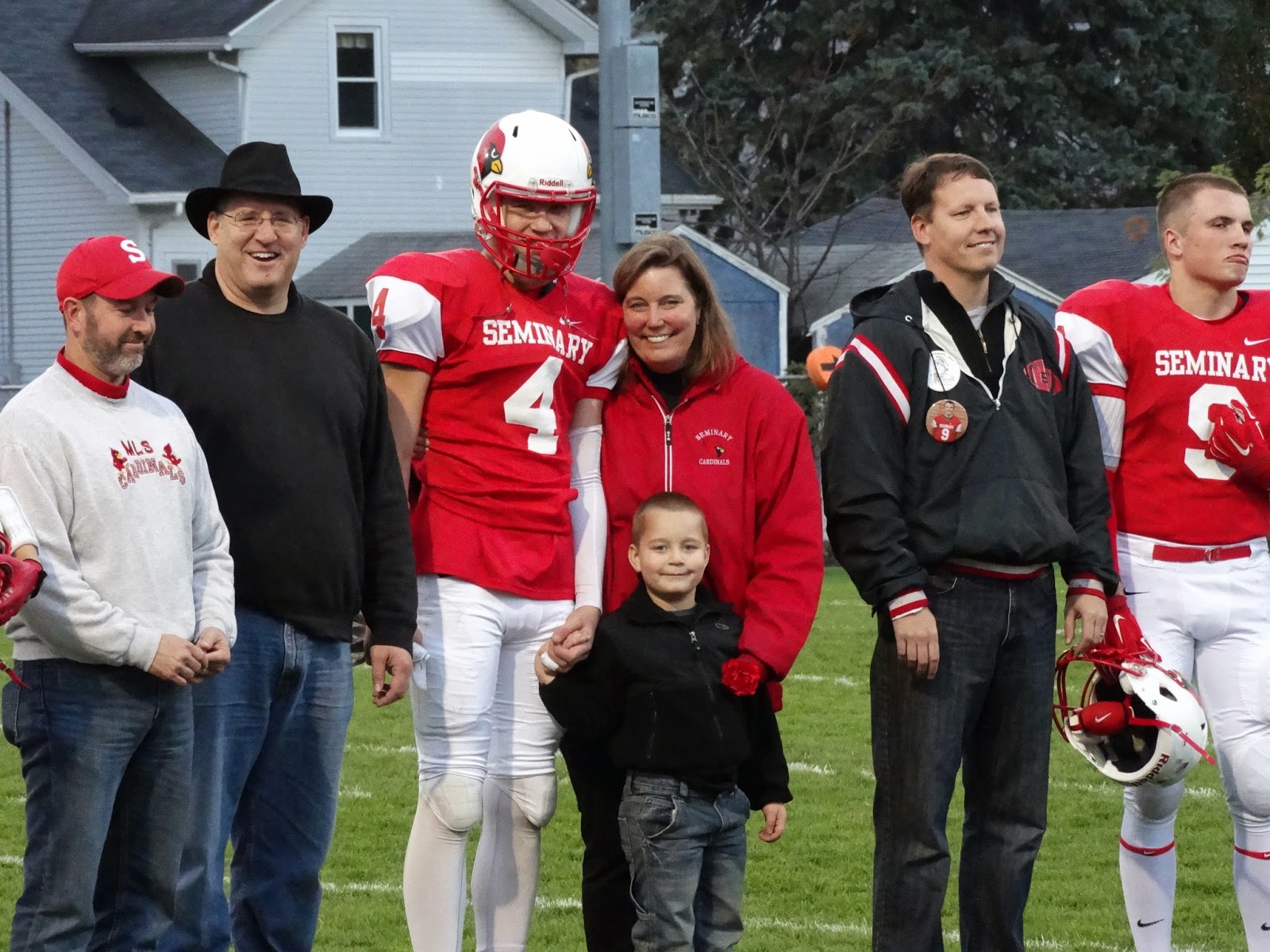 Lining up for Parents' Night. 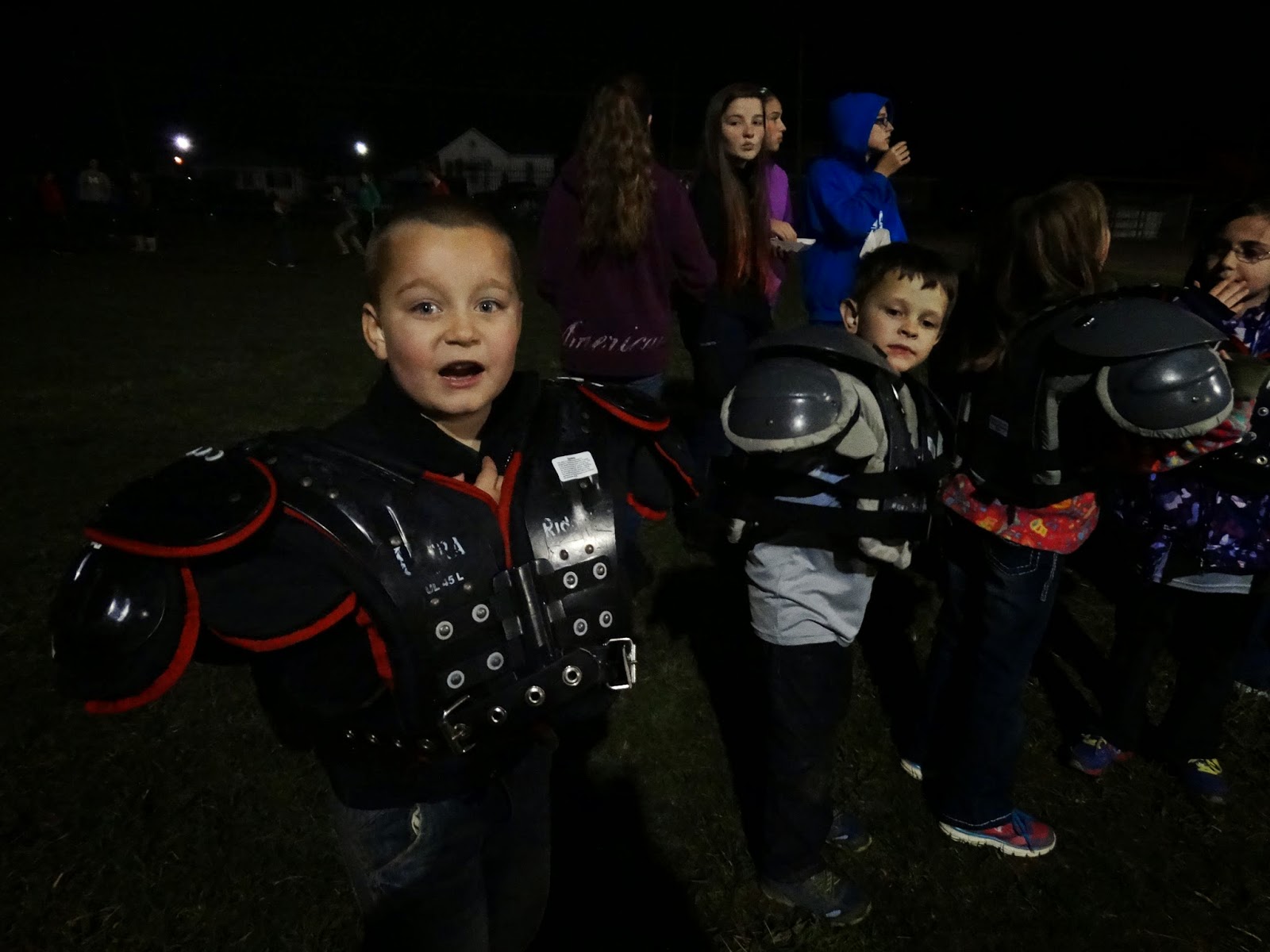 Here's a Jr. Cardinal ready to storm the field at half time. 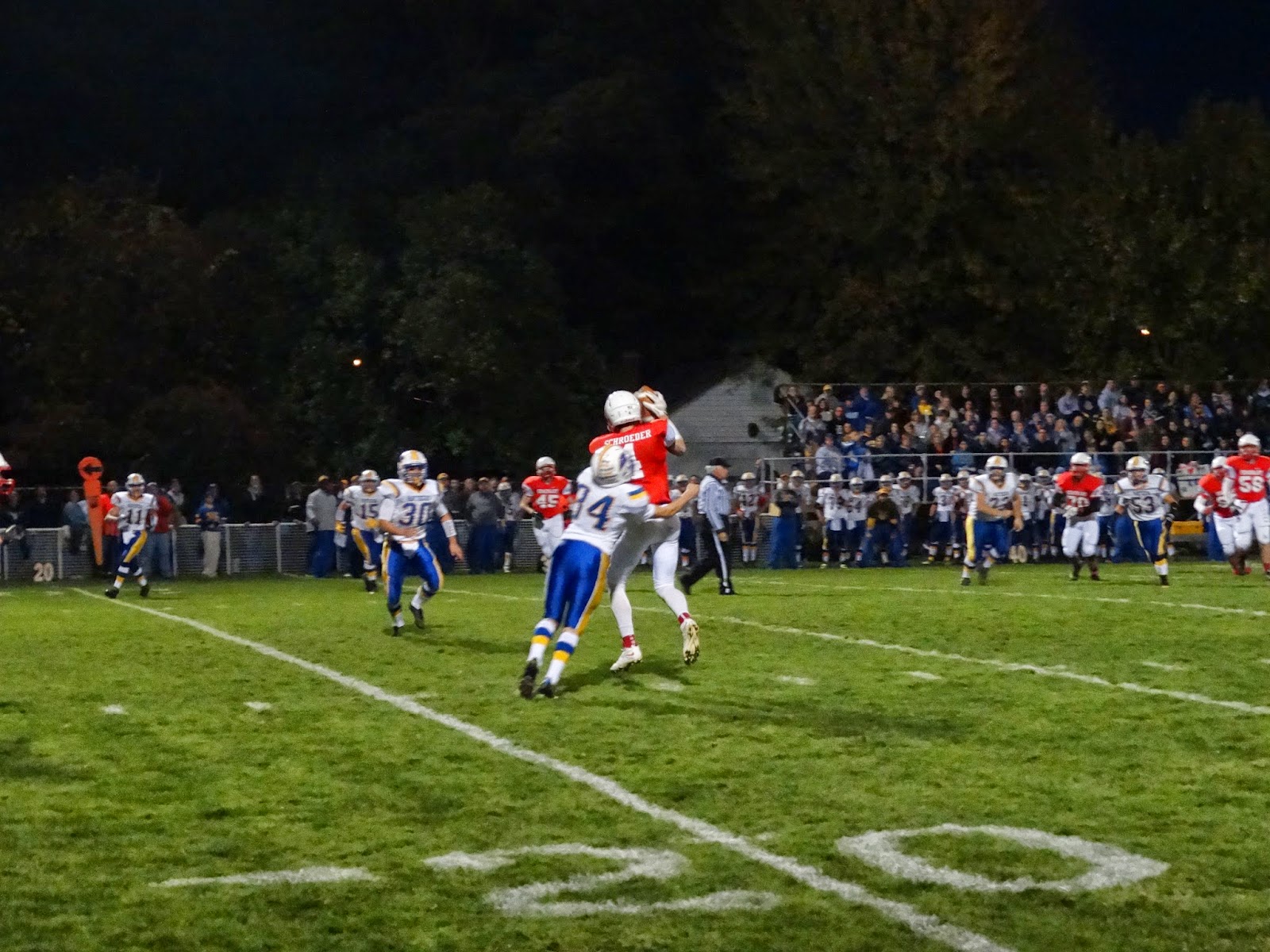 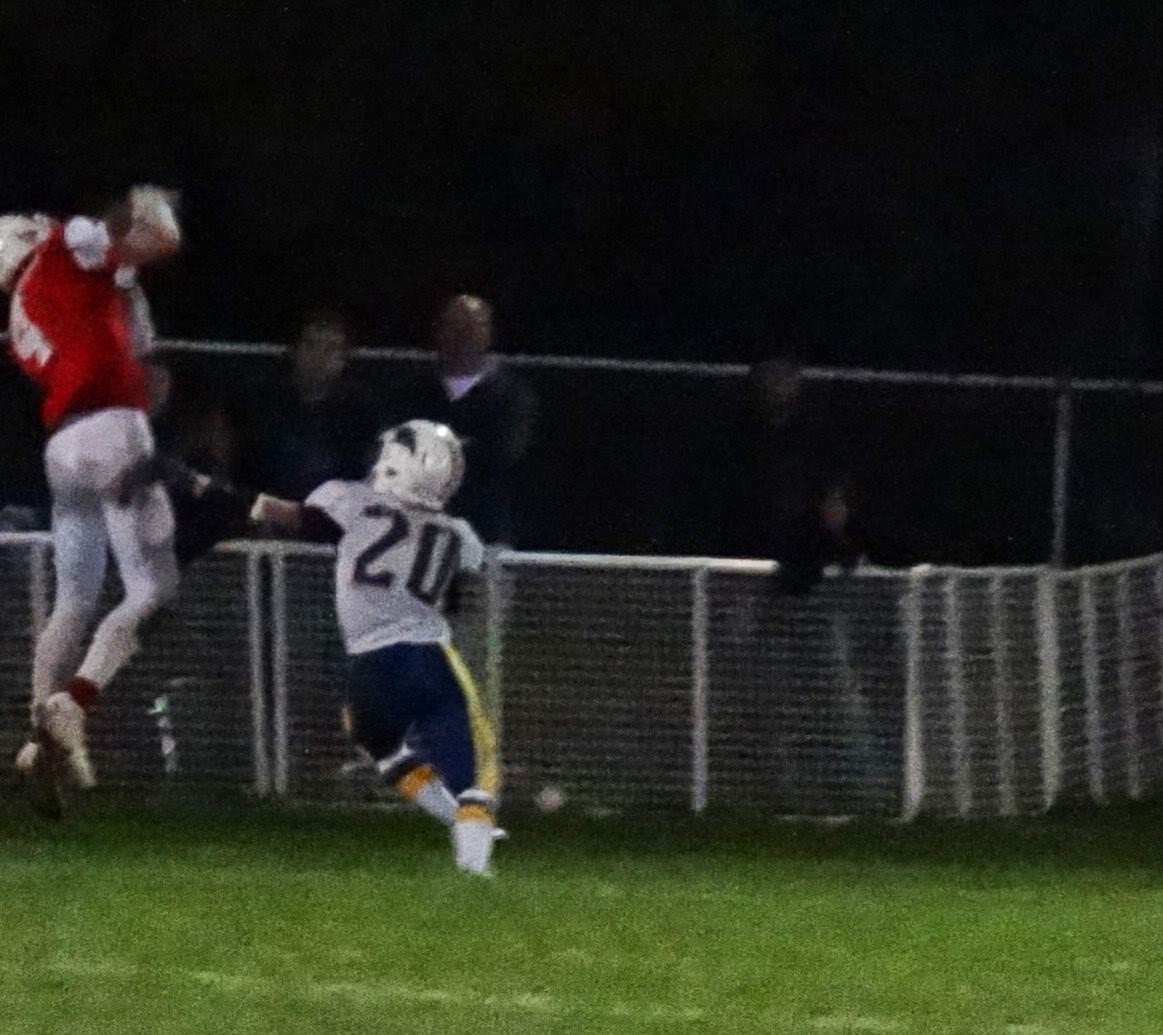 This catch was called out of bounds.  Andrew firmly disagreed, even walking to the
out of bounds line and pointing to his foot print for the referee.  They did not change the call. 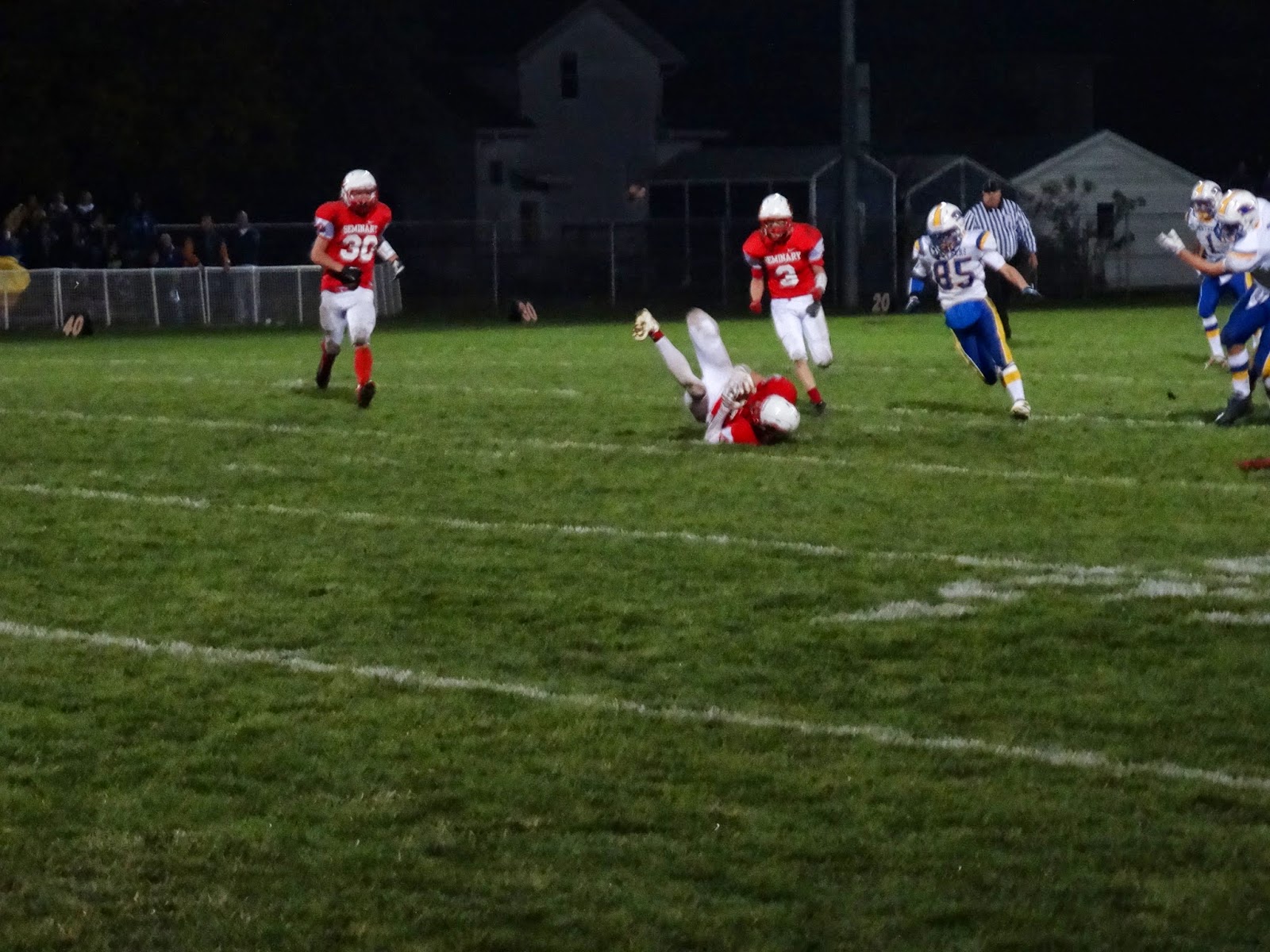 I missed the best part of Andrew's interception.  Sometimes you just watch the game.
Anyway, here he is cradling the ball after he had leaped over the receiver to make the grab. 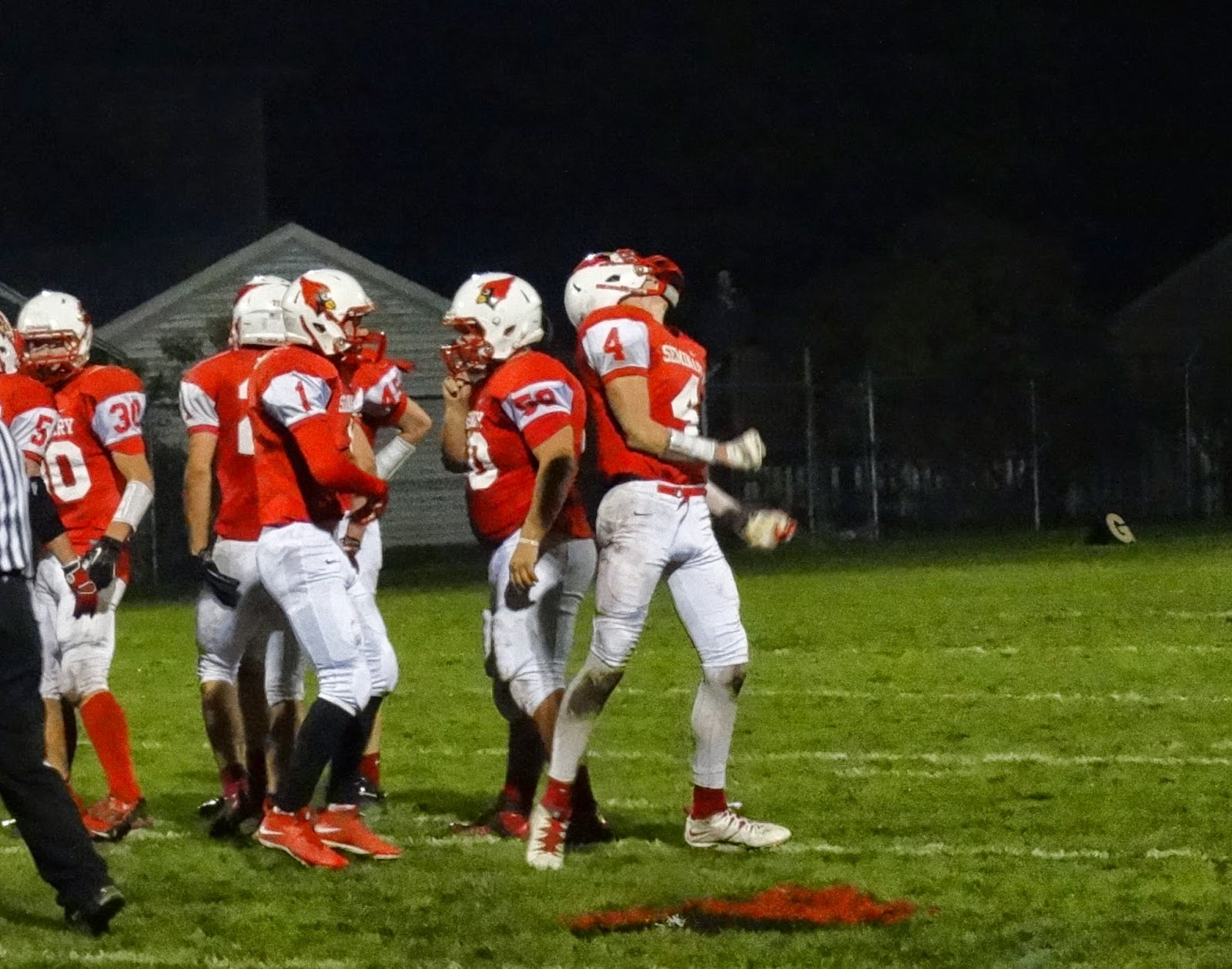 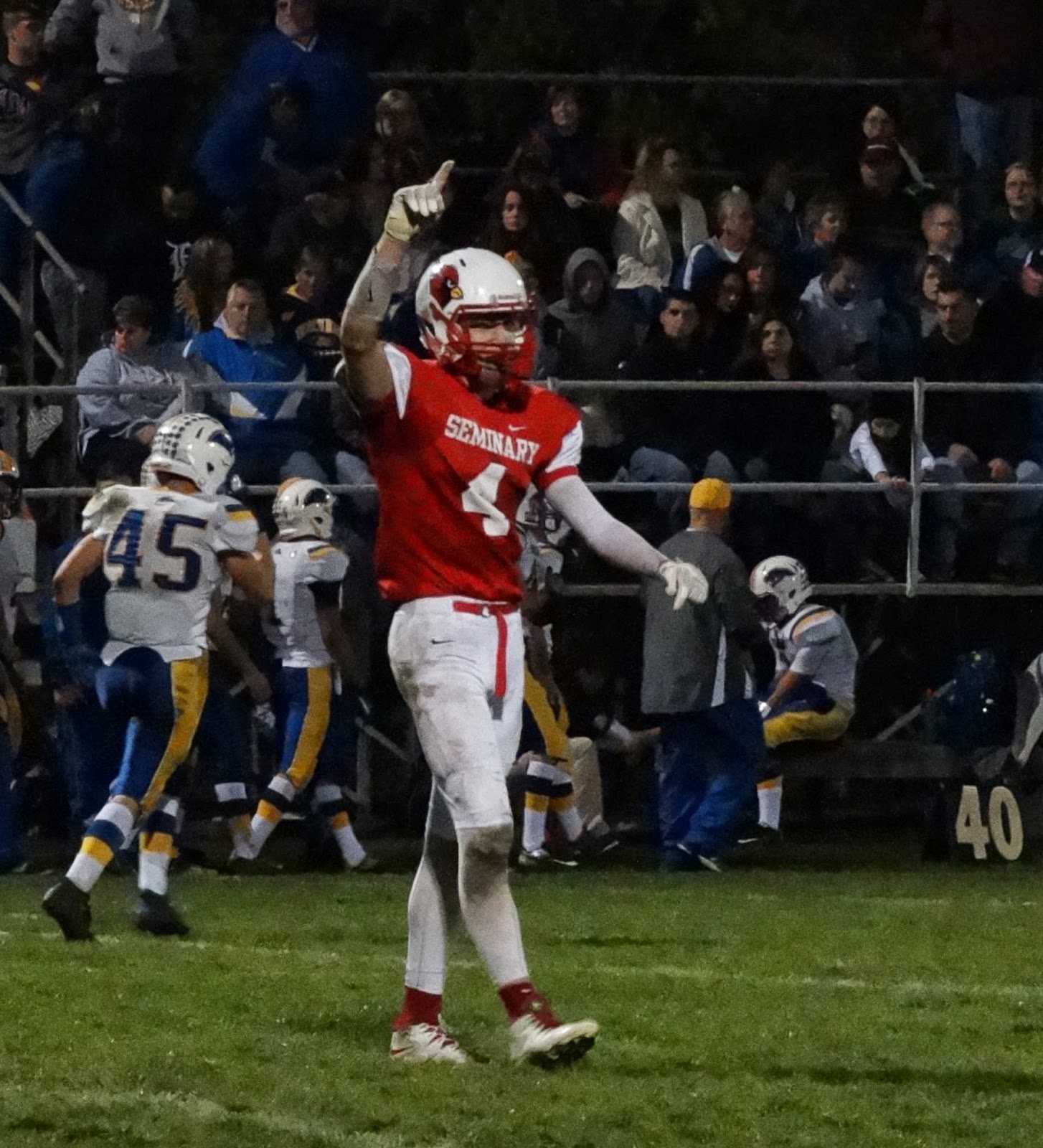 Play-offs, here we come!!!!
Posted by Pastor Thomas E Schroeder at 8:51 AM