We knew that St. Charles' JV team was good, and they were big.  The final score showed that, as the MLS Cardinals came up short, WAY short, 54-0.  I was not able to take any photos for this game as I was recruited for the chain gang.  I thought the conversation on the St. Charles side of the field might be entertaining and/or eye-opening, but there was not much controversial going on there.  I guess that happens when you are coasting to a lopsided victory.

The MLS Varsity traveled to St. Charles for their homecoming.  If you like defense, you would have liked the first half.  St. Charles' lone TD came after MLS was pinned deep in their own end and then fumbled the ball.  St. Charles only had to drive 2 yards to grab the early lead.  In the 2nd quarter, MLS got their "You-gotta-be-kidding-me" TD on a deep pass that had interception written all over it.  In fact, the St. Charles DB actually had caught it.  Then MLS' Owen Heyn literally ripped the ball right out of his hands and ran it in for the MLS TD.

Late in the 2nd quarter, Andrew grabbed an INT deep in MLS territory to end a St. Charles drive.  But then we rolled out for a pass from our own end zone and our QB got sacked.  So half time saw MLS down 8-7.

The second half saw MLS looking a lot sharper and finding some offensive plays that gained some yards.  St. Charles got their "You-gotta-be-kidding-me" TD on a deep pass that Andrew hoped to intercept.  His angle to the ball was just a bit off, so instead of the pick, he went for the knock away.  But the knock away sort of popped the ball a few feet up and the St. Charles receiver grabbed it and ran for the TD.

MLS, on the other hand, posted 3 more TD's in the second half, coming away with the 28-15 final score.  If you want to read the M-Live version of this, you can go here.  Otherwise, here are a few photos (mainly of Andrew). 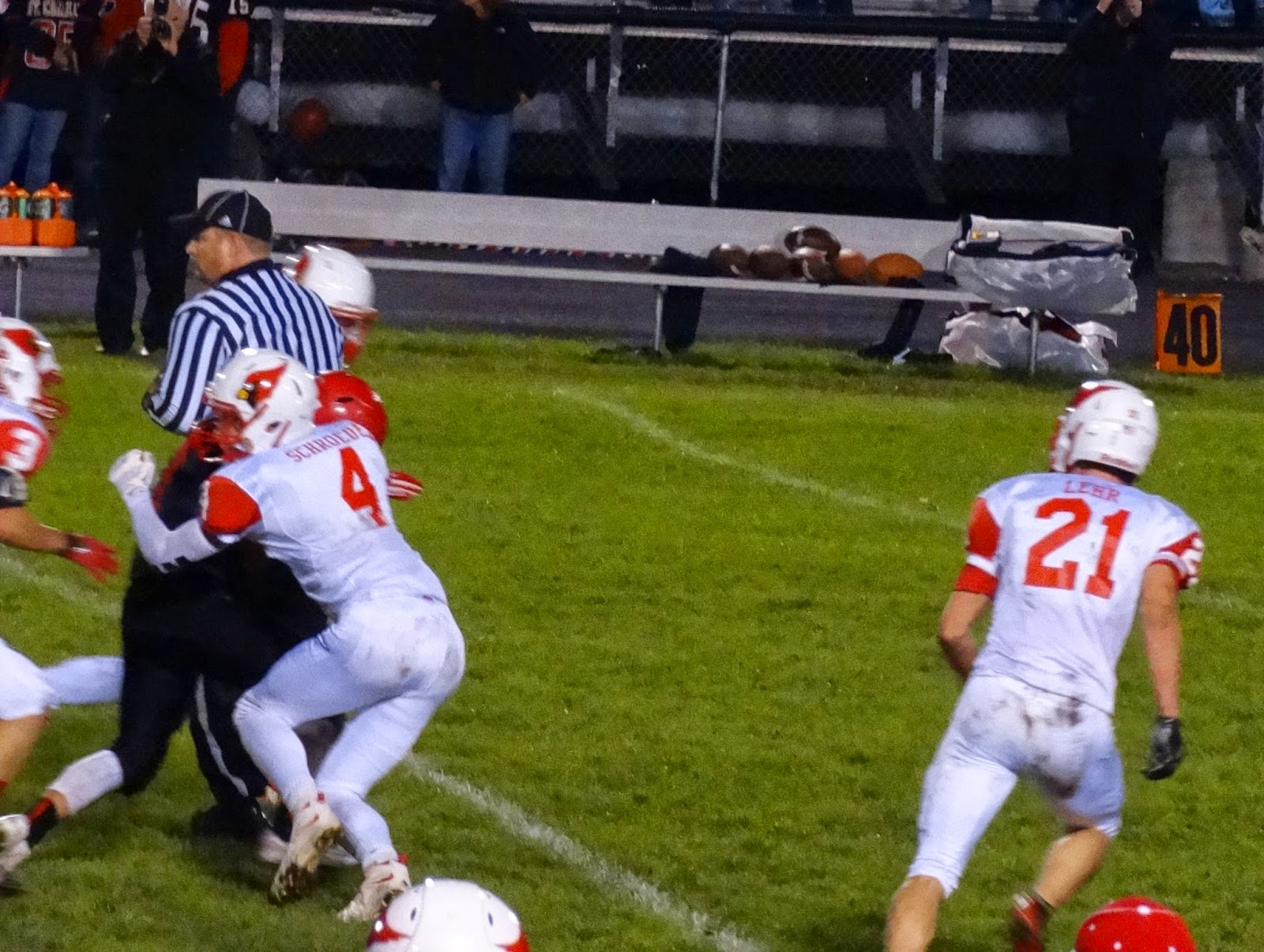 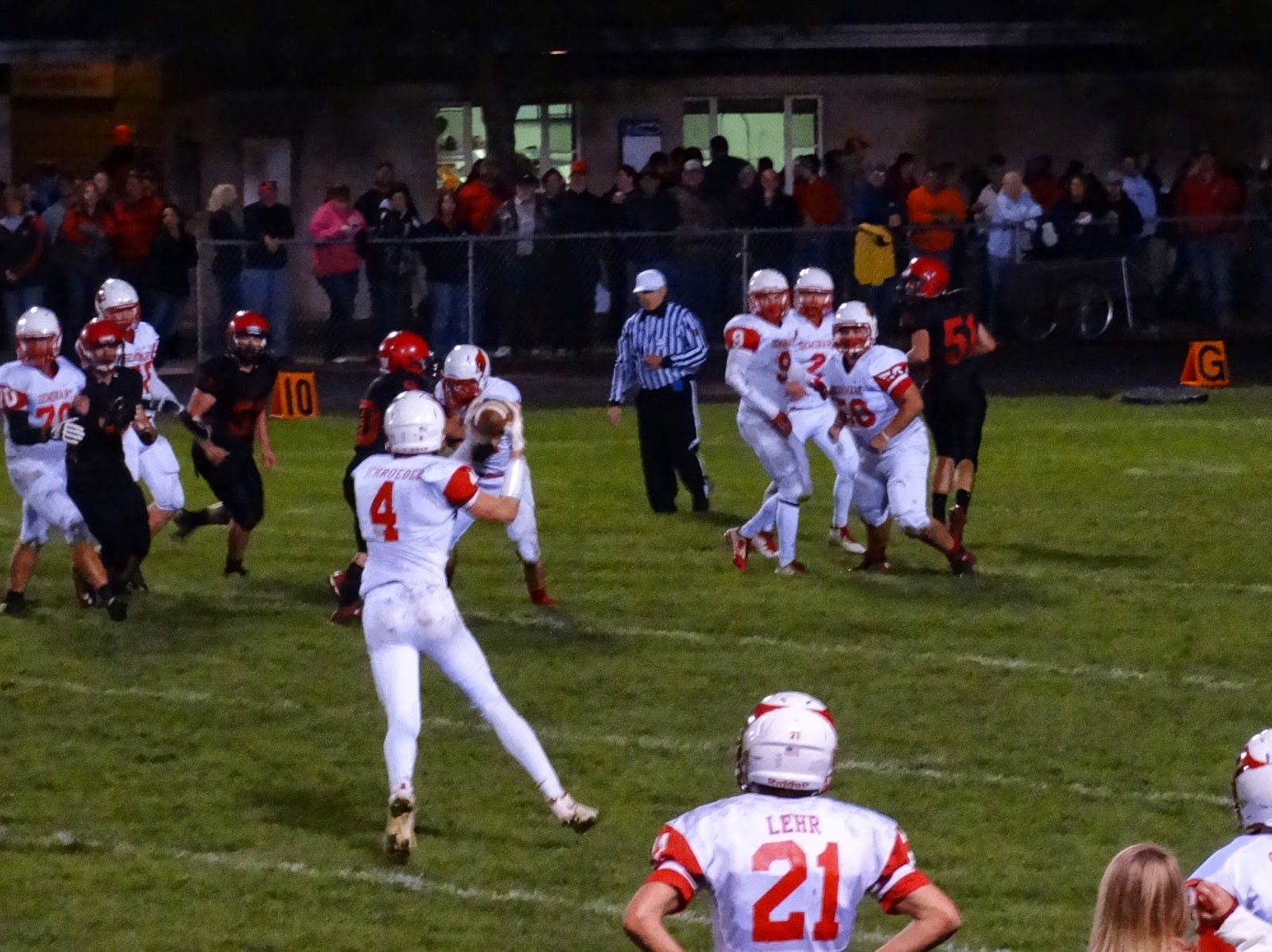 This catch was turned into about a 30 yard gain on a hard, tough run. 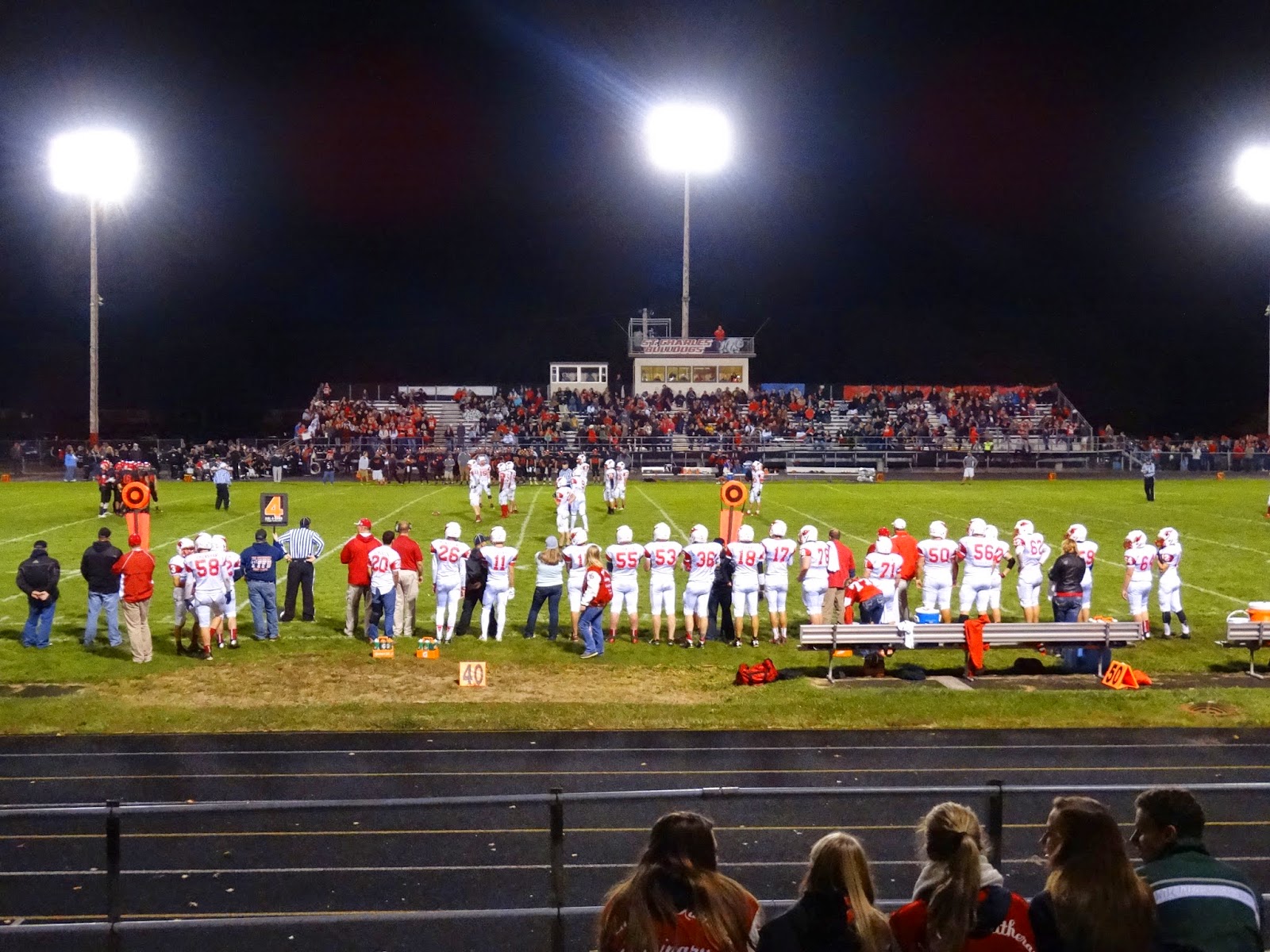 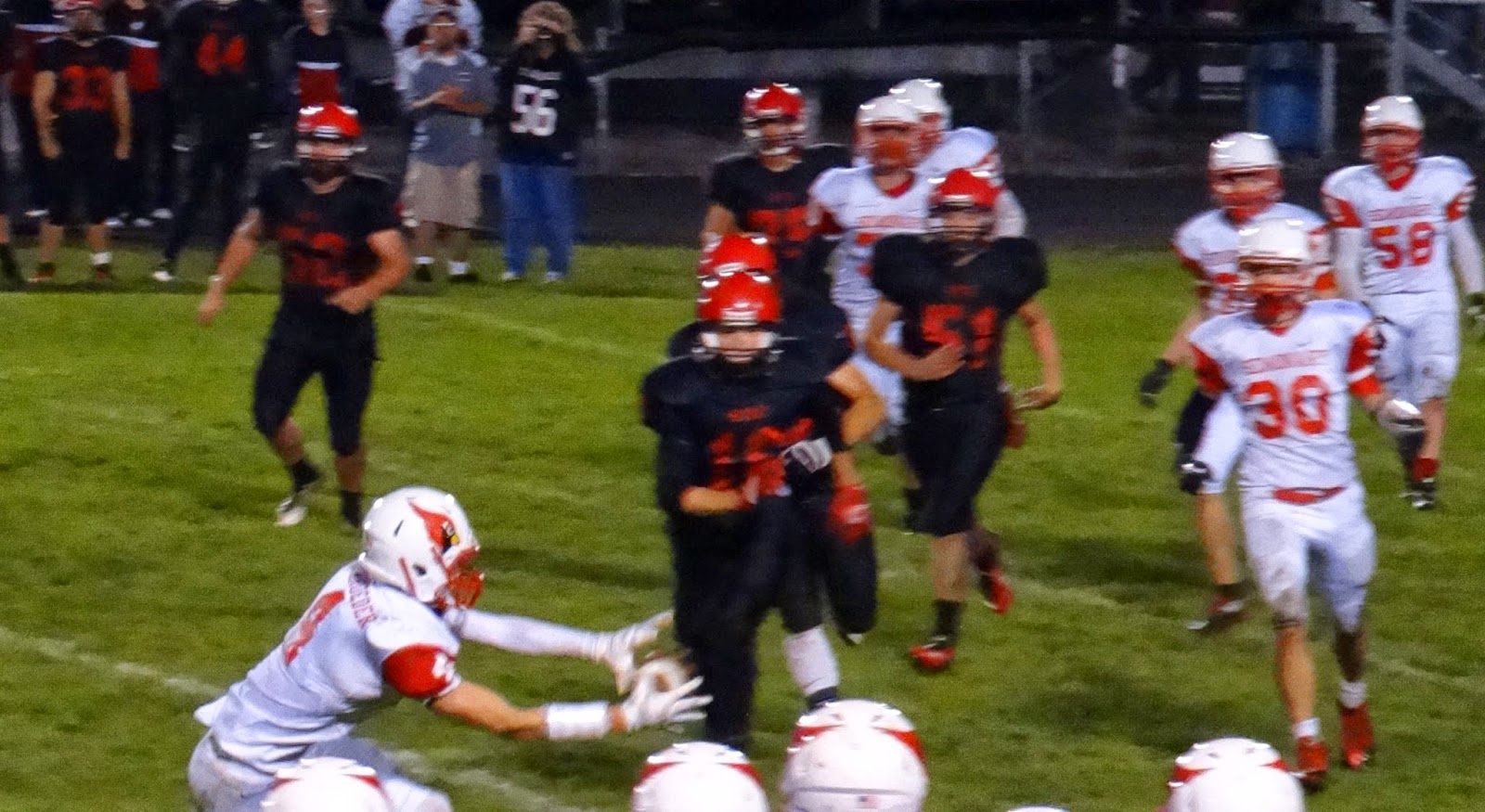 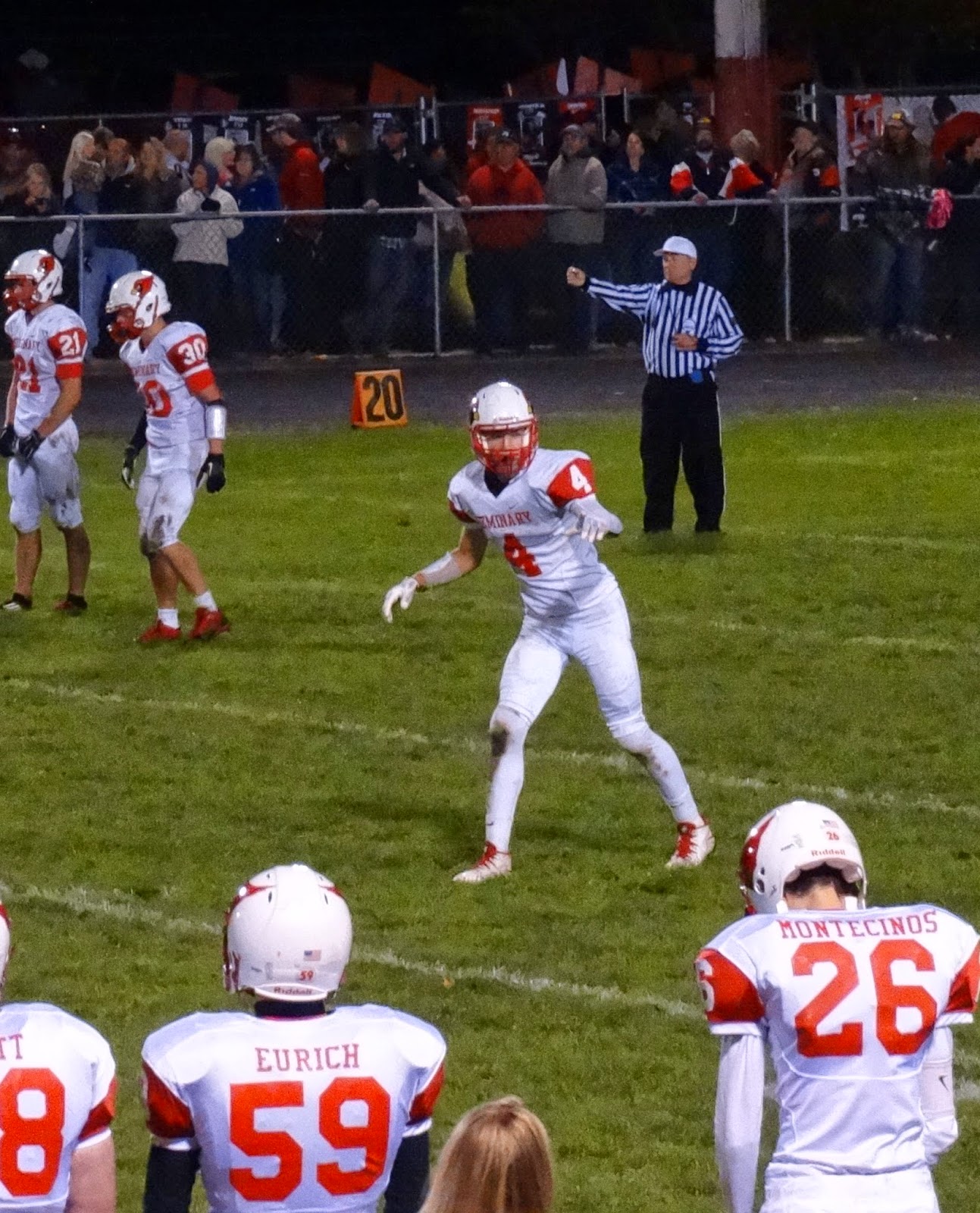 Posted by Pastor Thomas E Schroeder at 8:42 AM