Michigan Lutheran Seminary's varsity travelled west down M-46 to Merrill to play the Vandals.  Though Merrill did not have a large squad numerically, they did have pretty good size on the players they did have.  They had a very talented line who seemed to get movement, especially in the first half.

Merrill's drives came up short except for one, resulting in a Merrill 6-0 lead at half time.  MLS had a chance to at least tie just before half time.  At 4th down from about the 12, Andrew threaded the needle between 3 Merrill defenders and found Jordan Hayes in the back of the end zone.  It looked like a catch from my vantage point--there were a lot of charcaol grey jerseys blocking my view--but apparently Jordan was unable to haul it in.  (Jordan would avenge himself later.)

In the second half, MLS found a way to get the ball moving down the field a little more consistently.  Runs in between the tackles resulted in some pretty consistent gains of five or so yards.  Those were supplemented with some passes.  One TD was from a hard run by Andrew with several broken tackles along the way.  Later, Tristan Pankow broke through the line for a sprint of about 60 yards (give or take). giving MLS a 14-6 lead late in the game.

It looked pretty good for MLS late in the 4th quarter.  But Merrill staged a drive (aided by two 15 yard penatlies) and scored with under a minute to play.  Add the 2-point conversion, and it was a 14-14 tie.  It was looking like overtime.

MLS got the ball on about their own 35 yard line.  A long pass down the middle to Mark Burger put the Cardinals deep into Vandal territory.  MLS was looking at the end zone to seal the game with a TD.  MLS put back up QB Cade Kestner into the game to split Andrew out at wide receiver.  Merrill did not miss the switch and focused on Andrew, who went in motion right.  Then Cade threw to Mark Burger who was open up the middle again.  The ball rested at about the 5 yard line with :09 left.  MLS took one more shot at the end zone, but Merrill tipped the pass just over Andrew's fingers in the corner of the end zone.

With :05.2 left in the game, MLS tried for a game-winning field goal, which went through.  A false start pentaly, however, negated the field goal and backed MLS up five more yards.  So, with :04.4 left (they did not adjust the clock back to :05.2, but should have), Jordan Hayes booted it through the uprights, making it 17-14 for the Cardinals with :01 left.

After a kickoff out of bounds, Merrill's last ditch effort was a long pass that resulted in Andrew's third interception of the night.  MLS won, 17-14, overcoming a tough, resilient Merrill team. 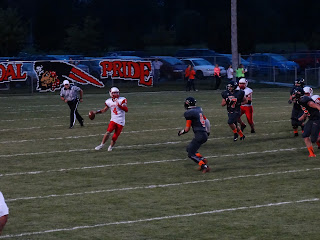 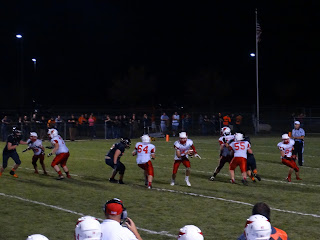