The Michigan Lutheran Seminary Cardinal varsity team took their undefeated record with them to visit the Sharks of St. Louis, my favorite away stadium in the conference.  It is a really nice setting with the home stands resting on the hillside and a creek which runs behind the away stands.  And with no trees in the west end zone, you can anticipate a pretty sunset.  Really nice.

The Sharks were celebrating their homecoming, and they were one play away from coming into this game undefeated themselves.  Needless to say, they were pretty pumped up.

The first quarter ended in a scoreless tie, but MLS was driving.  The second quarter is when MLS got very familiar with the end zone.  Andrew threw a deep TD pass to Tristan Pankow.  Later, Andrew scrambled around for a while and, just before getting hit, through a heave-ho pass that hung in the air seemingly forever.  It was about a 45 yard pass to Mark Burger, for whom time must have stood still as he was just waiting for the ball to come down, knowing that the defense was closing in.  Burger hauled it in for the TD.  The final TD of the half came after a turnover from St. Louis.  With about a minute left, MLS drove down the field.  Andrew ran in 5 yards out on a QB draw through a WIDE open hole (photo below). The offensive line literally formed a wall for him to run through.  Awesome!

In the 3rd quarter, Andrew took quite a beating on a long run.  We thought he was going to be out of the game with a concussion.  But he ran back in a few plays later with MLS getting ready to score.  Andrew tried a QB sneak and had his helmet ripped off and thrown to the side by the St. Louis defense.  No penalty, but they had drawn blood so he had to come out.  He went back after one play and a time out.  This time, Cade Kestner took over (for the rest of the game, in fact) at QB and Andrew lined up at wide reciever.  Kestner threw to the corner to Andrew for the next TD.

Finally, in the 4th quarter, Kestner dropped back to pass and had great protection.  He planted and threw deep to Andrew who was running a go route.  Andrew caught it in stride and scored on what was abouta 60 yard TD.  MLS ended up winning, 33-12.

You can read an M-Live article about the game here.  They also recognized that Andrew had a fantastic game.  He also had two interceptions at safety.  Wow! 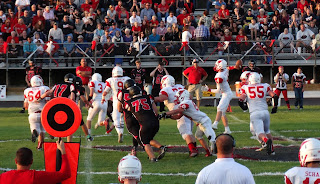 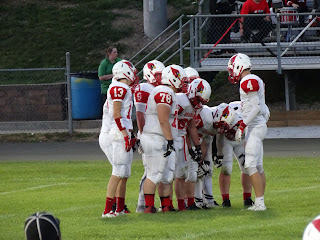 Posted by Pastor Thomas E Schroeder at 10:45 AM

Email ThisBlogThis!Share to TwitterShare to FacebookShare to Pinterest
Labels: football, MLS, The kdis